Constructed by: Alan Derkazarian
Edited by: Will Shortz 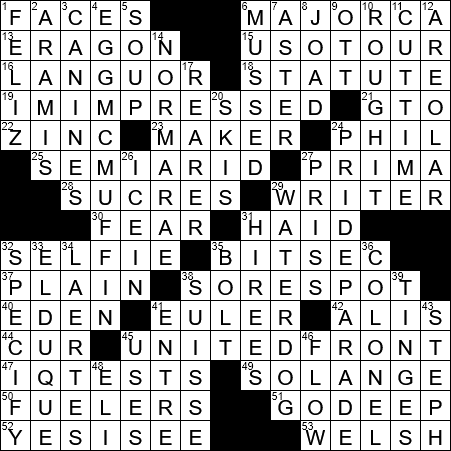 Palma is the main city and port on the island of Majorca in the Mediterranean Sea off the east coast of Spain.

Christopher Paolini began writing his best-selling fantasy story “Eragon” at the age of 15. Christopher’s parents, when they read the final version two years later, they decided to self-publish it and support Christopher as he toured the US promoting the novel. It was eventually republished by Alfred A. Knopf in 2003, and became the second-best-selling children’s paperback of 2005. The book was adapted for the big screen in 2006. I’d call that a success story …

15. Hope was once its driving force : USO TOUR

Languor, lassitude, lethargy and listlessness are such lovely words. All are L-words meaning a lack of physical energy.

“Three deuces and a four-speed” are words appearing the song “G.T.O”, the debut recording for the surf rock group of the sixties known as Ronny & the Daytonas.

Phil Mickelson is one of the most famous left-handed golfers currently playing on the PGA Tour. Less well know is the fact that outside of golf, he is right-handed. Despite his great success as a golfer, the US Open championship has always eluded him. He has finished runner-up six times, more times than any other player.

“Prima facie” is Latin for “first encounter” or “at first sight”. In the world of the law, a prima facie case is one in which the evidence is deemed to be sufficient for a judgment to be made unless the evidence is contested.

The author Jack London is a bit of a local hero in the Bay Area where I live. London was born in San Francisco, and there is a famous Jack London Square in Oakland, California that was named in his honor. London’s most famous works are “The Call of the Wild” and “White Fang”, both of which are set in the Klondike Gold Rush.

William Manchester was an American author and historian. Perhaps his best-known work is his best-seller “The Death of a President” first published in 1967. It is a comprehensive account of the assassination of President John F. Kennedy.

Actor Charles Haid is best known for playing Officer Andy Renko on the cop show “Hill Street Blues”. Haid is a cousin of Merv Griffin, the talk show host and creator of game shows “Jeopardy!” and “Wheel of Fortune”.

Selfie sticks, oh, how I hate selfie sticks. A walk down the Strip in Vegas is an enlightening exercise in what’s wrong with contemporary photography …

Back in the early 1500s, a “blackguard” was someone who worked in the scullery or kitchen. The term was probably of mock-military origin, referring to shoeblacks or perhaps lower-level servants dressed in black. Nowadays, a blackguard is a lowlife, a cur.

Solange Knowles is a singer/songwriter, and the younger sister of the incredibly successful singer Beyoncé. Solange was in the news not that long ago when security camera footage was released showing her punching and kicking Beyoncé’s husband Jay-Z in an elevator.

A bomb is a long pass in American football, for which a receiver would have to “go deep”.

In Wales, an “eisteddfod” is a festival celebrating the arts, and in particular literature, music and the performing arts. Eisteddfods have been held since at least the early 12th century.

Tom Joad is the protagonist the John Steinbeck’s novel “The Grapes of Wrath”. The role of Joad was played by Henry Fonda in the 1940 film adaptation directed by John Ford. Ford’s movie has a place in history, as it was one of the first 25 movies selected for preservation in the US National Film Registry by the Library of Congress.

Water dogs are dogs that are specially bred to retrieve game from water. Examples of breeds referred to as water dogs are the golden retriever, the Newfoundland and the standard poodle.

The famous “Colonel” of Kentucky Fried Chicken (KFC) fame was Harland Sanders, an entrepreneur from Henryville, Indiana. Although not really a “Colonel”, Sanders did indeed serve in the military. He enlisted in the Army as a private in 1906 at the age of 16, lying about his age. He spent the whole of his time in the Army as a soldier in Cuba. It was much later, in the 1930s, that Sanders went into the restaurant business making his specialty deep-fried chicken. By 1935 his reputation as a “character” had grown, so much so that Governor Ruby Laffoon of Kentucky gave Sanders the honorary title of “Kentucky Colonel”. Later in the fifties, Sanders developed his trademark look with the white suit, string tie, mustache and goatee. When Sanders was 65 however, his business failed and in stepped Dave Thomas, the founder of Wendy’s. Thomas simplified the Sanders menu, cutting it back from over a hundred items to just fried chicken and salads. That was enough to launch KFC into the fast food business. Sanders sold the US franchise in 1964 for just $2 million and moved to Canada to grow KFC north of the border. He died in 1980 and is buried in Louisville, Kentucky. The Colonel’s secret recipe of 11 herbs and spices is indeed a trade secret. Apparently there is only one copy of the recipe, a handwritten piece of paper, written in pencil and signed by Colonel Sanders. Since 2009, the piece of paper has been locked in a computerized vault surrounded with motion detectors and security cameras.

“Suisse” is the French word for “Swiss”, and “la Suisse” is French for “Switzerland”.

“Allemagne” is French for “Germany”.