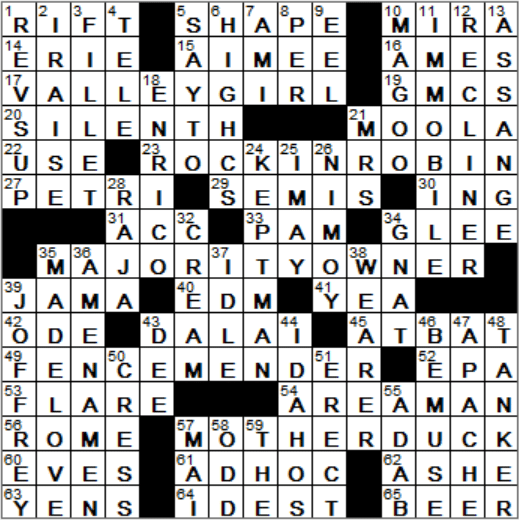 Themed clues appear to refer to success on various social media platforms, but the answers are much more traditional in nature:

The second letter in the word “thyme” is a silent letter H (aitch).

29. Round after the Elite Eight : SEMIS

Arthur Ashe was a professional tennis player from Richmond, Virginia. In his youth, Ashe found himself having to travel great distances to play against Caucasian opponents due to the segregation that still existed in his home state. He was rewarded for his dedication by being selected for the 1963 US Davis Cup team, the first African American player to be so honored. Ashe continued to run into trouble because of his ethnicity though, and in 1968 was denied entry into South Africa to play in the South African Open. In 1979 Ashe suffered a heart attack and had bypass surgery, with follow-up surgery four years later during which he contracted HIV from blood transfusions. Ashe passed away in 1993 due to complications from AIDS. Shortly afterwards, Ashe was posthumously awarded the Presidential Medal of Freedom by President Bill Clinton.

The Latin “exempli gratia” means “for the sake of example”, and isa phrase we often use in English. “Exempli gratia” is almost always shortened to “e.g.”

A fillet is a boneless cut of meat or fish. The term comes from the Old French “filet” meaning “small thread, filament”. Apparently we applied the term to food as the piece of fish or meat was tied up with string after it was boned. Here in the US, we tend to use the French spelling “filet”.

Those would be musical notes.

“Lucia di Lammermoor” is an 1835 opera by Gaetano Donizetti, which is loosely based on the historical novel “The Bride of Lammermoor” written by Sir Walter Scott.

Cochise and Geronimo were perhaps the two most famous Apache leaders to resist intrusions by the European Americans in 1800s. Both lived lives full of conflict, but both also lived relatively long lives. Cochise eventually entered into a treaty putting an end to the fighting, and retired onto a new reservation. Cochise died of natural causes in 1874, at the age of 69. Geronimo surrendered, and spent years as a prisoner of war. He spent his last years as a celebrity, and even rode in the inaugural parade for President Theodore Roosevelt. Geronimo died of pneumonia in 1909 at the age of 79.

The Exxon Valdez was an oil tanker that famously went aground in Prince William Sound in Alaska in 1989, spilling hundreds of thousands of crude oil. The ship was repaired after the incident and went back into service under the new name “Exxon Mediterranean”.