Constructed by: Laura Braunstein
Edited by: Will Shortz 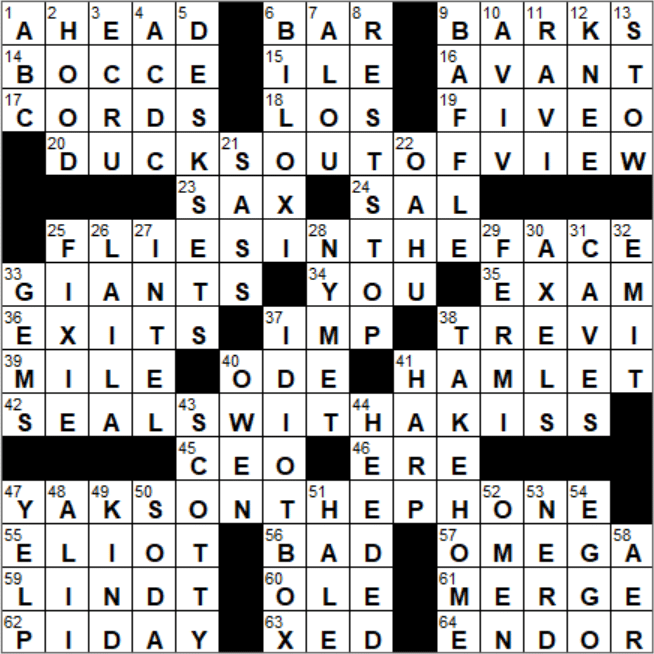 Today’s Theme (according to Bill): Verbs or Animals?

Themed answers are common phrases in which a leading verb is reinterpreted as a collection of animals:

The cop show “Hawaii Five-O” originally ran from 1968 until 1980, with Jack Lord and James MacArthur playing detectives Steve McGarrett and “Danno” Williams. The famous theme music was composed by Morton Stevens. The show was rebooted as “Hawaii Five-0”, premiering in 2010, with Alex O’Loughlin and Scott Caan playing Steve McGarrett and “Danno” Williams. Notice the important difference in the titles of the two versions of the show: the former using a capital letter O, and the latter the numeral zero.

20. Why the hunter couldn’t shoot the mallards? : DUCKS OUT OF VIEW

The mallard is perhaps the most recognizable of all ducks and is also known as the Wild Duck. The name “mallard” has the same Latin root as our word “male”, probably reflecting how flamboyant the coloring is of the male of the species relative to the female.

41. His last words were “The rest is silence” : HAMLET

42. Circus animals enjoying some chocolate? : SEALS WITH A KISS

47. Whose conversation might be about shaggy hair and Himalayan peaks? : YAKS ON THE PHONE

The delicious Swiss chocolate sold under the Lindt brand name has its origins in a small confectionery store in Zurich in the 1840s. Lindt purchased our local chocolate company here in San Francisco (Ghirardelli) back in 1998.

Neil Simon is one of my favorite playwrights. Simon has written over thirty plays and about thirty screenplays. He has received more nominations for Oscars and Tony Awards than any other writer. My favorite play penned by Simon has to be “Brighton Beach Memoirs”, but the list of his great stage works seems endless and includes “Barefoot in the Park”, “The Odd Couple”, “Sweet Charity”, “Plaza Suite”, “California Suite”, “Biloxi Blues” and “The Goodbye Girl”.

25. Many a single-gear bicycle : FIXIE

Intel is the world’s largest manufacturer of semiconductor chips. The company was founded in 1968, and the name “Intel” is a derived from the term “int(egrated) el(ectronics)”. Recognition of the Intel brand has been greatly helped by the success of the “Intel Inside” campaign that started back in 1991.

“Idiot box” and “boob tube” are nicknames for television.

There’s a story (not sure if it’s really true) about an Irishman who was being sentenced in the dock in a Dublin courtroom years ago. When asked by the judge, “Do you have anything to say before I pass sentence?”, the convicted man took out a pack of cigarettes from his pocket, flipped open the cardboard lid and brought the pack to his lips. He then said, “Beam me up, Scotty”.