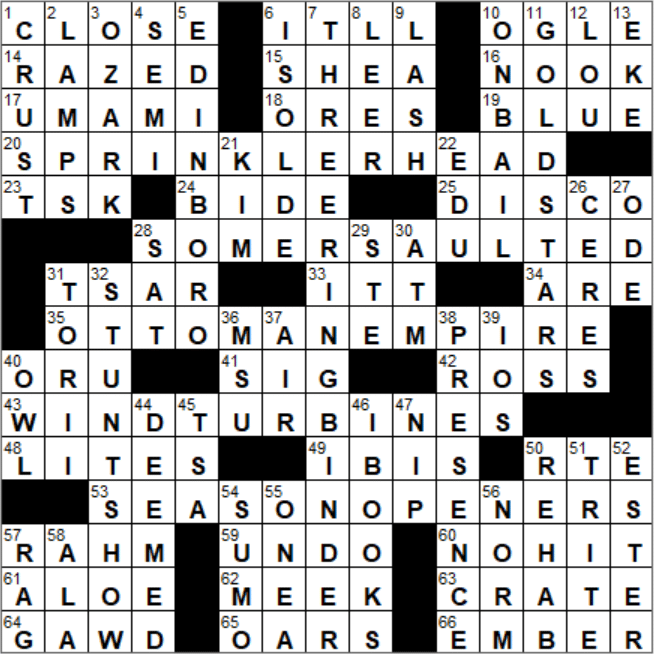 Themed answers sound like they start with one of the four seasons:

To raze (“rase”, in UK English) is to level to the ground. I’ve always thought it a little quirky that “to raise”, a homophone of “to raze”, means “to build up”.

25. Dance place that might have a revolving ball overhead : DISCO

A turbine is a machine uses the flow of a fluid (sometimes air) to create rotational work. Simple examples of turbines are windmills and waterwheels.

Rahm Emanuel was an Illinois representative in the US House before resigning in 2009 to take up President Obama’s offer to become the White House Chief of Staff. Emanuel moved on from the White House the following year in order to run as a candidate in Chicago’s mayoral election in 2011. He won the 2011 race, and was re-elected in 2015.

According to Arthurian legend, Iseult (also “Isolde”) was the adulterous lover of Sir Tristan, one of the Knights of the Round Table. Iseult was an Irish Princess who fell in love with Tristan who had been sent to win Iseult’s hand in marriage for King Mark of Cornwall. The tale was used as the basis for Richard Wagner’s celebrated opera “Tristan und Isolde”.

Sainte-Foy used to be a city in its own right, but as of 2002 it is a neighborhood in Quebec City. Sainte-Foy is an important part of the larger city, partly because it is home to the area’s main airport, Jean Lesage International.

Michigan State University’s sports teams used be called the Aggies, as the school was founded as the State Agricultural College of Michigan. The team name was changed to the Spartans in 1925, reflecting the school’s shift in focus beyond agriculture-centered education. The school mascot Sparty hit the scene in 1989.

54. Sport conducted in a dohyo : SUMO