Constructed by: Mary Lou Guizzo
Edited by: Will Shortz 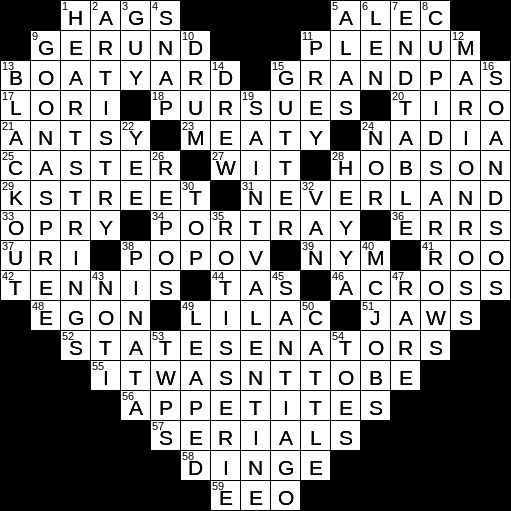 Today’s grid art shows us a heart, a gift for Saint Valentine’s Day. There are also several Valentin-ish themed answers:

The witches in Shakespeare’s “Macbeth” have some lovely lines as they boil up and evil brew and cast a spell:

A gerund is a form of a verb that can be used as a noun. For example, the gerund of the verb “to act” is “acting”, as in the phrase “we really enjoyed the acting”.

Plenum (plural “plena”) is the name given to a complete legislative assembly under the parliamentary system, with the associated term of “quorum” being the minimum number of members required to be present to conduct business.

Nadia Comaneci won three golds in the 1976 Summer Olympics and was the first gymnast to be awarded a perfect score of a ten in the gymnastics competition. Comaneci published a book called “Letters to a Young Gymnast” in 2003, and now lives in the United States.

“Why, but there’s many a man hath more hair than wit” is a line from William Shakespeare’s play “The Comedy of Errors”.

William Shakespeare’s “The Comedy of Errors” is the shortest of all his plays, and one of his earliest. It’s all about two sets of identical twins who are separated at birth. Hilarity ensues …

38. Vodka with a Russian name : POPOV

Popov vodka is is produced in America by the British company Diageo. Popov fills a niche in the low end of the vodka market. This American alcoholic drink is sometimes given the tongue-in-cheek nickname “Russia’s Finest”.

The New York Mets baseball team was founded in 1962 as a replacement for two teams that the city had lost, namely the Brooklyn Dodgers and the New York Giants. For several years the Mets played very poorly, finishing no better than second-to-last in their division. Then of course along came the “Miracle Mets” (aka “Amazin’ Mets”) who beat the Baltimore Orioles in 1969 to claim the World Series in a huge upset.

P. J. O’Rourke is a political satirist and journalist. I enjoy listening to O’Rourke as a regular panelist on the NPR game show “Wait Wait… Don’t Tell Me!” O’Rourke is also well-known on the other side of the Atlantic for his appearance in a series of satirical TV spots for British Airways.

Len Cariou is a Canadian actor who is famous for his Broadway portrayal of “Sweeney Todd”. I most recognize him from supporting roles in “Flags of Our Fathers” and “Thirteen Days”, two great movies.

8. They lead to love at first sight : CUPID’S ARROWS

Something that is “neither fish nor fowl” is not recognizable, is not familiar at all.

38. One getting smashed at a party? : PINATA

“McJob” is a slang term for a low-paying position that offers little chance for advancement. The term of course comes from front-line jobs at a McDonald’s fast-food restaurant.