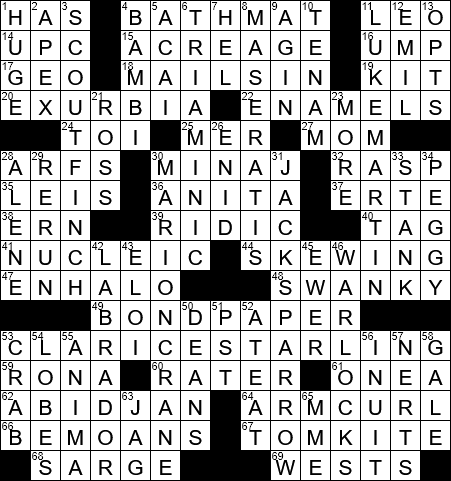 Themed answers are movie characters, the portrayal of whom earned Oscar nominations. The family names of the characters are all types of bird:

Each of the twelve astrological signs is associated with one of the classical elements:

In baseball, the cloth-covered pillows used to mark the first, second and third bases can be referred to as bags.

Back in the 15th century, “an umpire” was referred to as “a noumpere”, which was misheard and hence causing the dropping of the initial letter N. The term “noumpere” came for Old French “nonper” meaning “not even, odd number”. The idea was that the original umpire was a third person called on to arbitrate between two, providing that “odd number” needed to decide the dispute.

Tooth enamel covers the crowns of our teeth. Tooth enamel is the hardest substance in the human body. It is composed of 96% crystalline calcium phosphate.

The North Sea is an offshoot of the Atlantic Ocean that is located between Britain and Scandinavia.

30. Rapper with the double-platinum album “The Pinkprint” : MINAJ

“Ridic” is an informal way to say “ridiculous”.

“Cockamamy” (sometimes “cockamamie”) is a slang term meaning “ridiculous, incredible”. The term goes back at least to 1946, but may have originated as an informal term used by children in New York City in 1920s.

“Graffiti” is the plural of “graffito”, the Italian for “a scribbling”. The word was first used to describe ancient inscriptions on the walls in the ruins of Pompeii.

53. Jodie Foster’s Oscar-winning role in “The Silence of the Lambs” : CLARICE STARLING

Abidjan is a city on the coast of the West African nation of Ivory Coast. The urban area that includes the city is home to almost 13 million people. That makes metropolitan Abidjan the third-largest, French-speaking urban agglomeration in the world, after Paris and Kinshasa (in Congo).

67. Golfer who you might think plays best on windy days? : TOM KITE

Tom Kite is a professional golfer from McKinney, Texas. Kite was a consistent money winner on the PGA circuit, and was the first to reach $6 million in winnings, as well as 7, 8 and 9 million dollars.

The four people playing a game of bridge are positioned around a table at seats called north, east, south and west. Each player belongs to a pair, with north playing with south, and east playing with west.

Actress Mary Badham is a best known for portraying Jean Louise “Scout” Finch in the 1962 movie “To Kill a Mockingbird”. That performance earned Badham an Oscar nomination as Best Supporting Actress. She was just 10 years old, making her the youngest actress nominated to date in the category at that time. Badham held that record until 10-year-old Tatum O’Neal was nominated, and won, for her performance in 1973’s “Paper Moon”.

5. Berry in smoothies and yogurt : ACAI

“Coming Home” is a 1978 movie about a love triangle between a young wife (Jane Fonda), her husband who is a US Marine (Bruce Dern), and a paralyzed Vietnam War veteran (Jon Voight).

“Emil and the Detectives” is a novel first published in 1929. It was originally written in German and was titled “Emil und die Detektive”. The Disney company released a film adaptation in 1964.

Enid, Oklahoma takes its name from the old railroad station around which the city developed. Back in 1889, that train stop was called Skeleton Station. An official who didn’t like the name changed it to Enid Station, using a character from Alfred Lord Tennyson’s “Idylls of the King”. Maybe if he hadn’t changed the name, the city of Enid would now be called Skeleton, Oklahoma! Enid has the nickname “Queen Wheat City” because is has a huge capacity for storing grain, the third largest grain storage capacity in the world.

The city, lake and river in Idaho called Coeur d’Alene are all named for the Coeur d’Alene People, Native Americans who lived in the area when it was first explored by French Canadian fur traders. “Coeur d’Alene” translates from French as “heart of an awl”. The Native American people were given this name as they were perceived as shrewd traders by their Canadian counterparts.

Captain Jack Sparrow is the protagonist in the “Pirates of the Caribbean” series of movies. And is played by Johnny Depp. Depp has said that he based his portrayal of Sparrow partly on the Rolling Stones guitarist Keith Richards. I could believe that …

A male practitioner of black magic can be referred to as a witch, but also as a warlock. The term “witch” is used predominantly for female sorcerers.

56. Language that gave us the word “igloo” : INUIT

“Nerts” is a slang term, a corruption of “nuts!”

A gale is a very strong wind, a wind that is defined by Beaufort wind scale as a wind with speeds from 50 to just over 100 kilometers per hour.