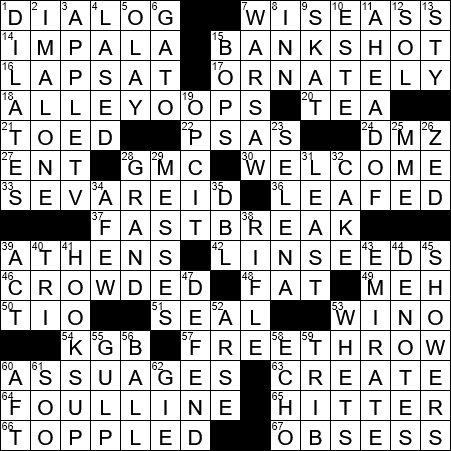 Today’s Theme:Meet in the Middle

CELEBRITY CROSSWORD
This puzzle is a collaboration by the basketball-loving senator Joe Donnelly of Indiana, working together with longtime crossword contributor Michael S. (Mickey) Maurer, the owner of the Indianapolis Business Journal. This is Mickey’s 25th crossword for The Times.
More information about the making of today’s puzzle appears in the Times’s daily crossword column (nytimes.com/column/wordplay).

Themed answers are terms used in basketball, but are clued with a different meaning:

Eric Sevareid was one of the team of journalists known as the “Murrow Boys” who were hired and worked closely with Edward R. Murrow. Sevareid was the first American journalist to report the fall of Paris to the Germans during WWII. Later during the same war, he had to be rescued by a search and rescue team after his aircraft was shot down behind enemy lines in Burma.

In Ancient Greece, Socrates was a respected thinker of his day. One of Socrates’ most clever students was Plato, who spent much of life espousing the work and thinking of his mentor and teacher. In later life, Plato himself had a student who built on the work of both Socrates and Plato. That second-generation student was Aristotle. Socrates fell out of favor with the political leaders in Athens who put him on trial on trumped-up charges. He was found guilty of corrupting the youth of the city-state and of not believing in the gods of the state. The sentence levied was death by drinking hemlock.

Linseed oil is also known as flaxseed oil, as the oil is extracted from the dried seeds of the flax plant.

The famous New Year’s Eve ball-dropping tradition in Times Square, New York started on January 1st 1908. The original ball was lit with one hundred 25-watt light bulbs and was dropped at one second after midnight. A fifth version of the ball was introduced in 2008 for the centennial anniversary of the ceremony. The 2008 ball was built by Waterford Crystal and was lit by 9,567 LED bulbs that consumed the same amount of power as ten electric toasters. The current ball was used for the first time in 2009, and is double the size of the 2008 ball at 12 feet in diameter. The ball now sits atop Times Square year round, so you can go see it next time you are in town.

Jack Sprat was a nickname given in the 16th century to people of small stature. Jack featured in a proverb of the day:

The “Komitet gosudarstvennoy bezopasnosti” (KGB) was the national security agency of the Soviet Union until 1991. The KGB was dissolved after the agency’s chairman led a failed attempt at a coup d’état designed to depose President Mikhail Gorbachev.
“The Spy Who Loved Me” is one of Ian Fleming’s James Bond novels, one that was first published in 1962. It is somewhat unique in the series of Bond books in several ways. Firstly, the story is told by a narrator, a young Canadian woman named Vivienne Michel. Secondly, James Bond doesn’t appear in the storyline at all until two-thirds of the way through the book. Also, “The Spy Who Loved Me” is the shortest of all the Bond novels, and the most sexually explicit.

The full title of the Warsaw pact was the Warsaw Treaty Organization of Friendship, Cooperation, and Mutual Assistance. The Soviet Union was behind the signing of the 1955 treaty, and the signatories were:

Punta del Este is a resort city in southeastern Uruguay that is located about 85 miles east of Montevideo.

According to the “Guinness Book of World Records”, “Happy Birthday to You” is the most popular song in the English language. “For He’s a Jolly Good Fellow” and “Auld Lang Syne” come in second and third.

Well, the word “arse” would never make it into a crossword in the British Isles as it would be considered too rude. I have a similar reaction to the word “shag” as in “The Spy Who Shagged Me”. The film would never have been released with that title in the UK.

“The Chicago Tribune” was first published in 1847. The most famous edition of “The Trib” was probably in 1948 when the headline was “DEWEY DEFEATS TRUMAN”, on the occasion of that year’s presidential election. When it turned out Truman had actually won, the victor picked up the paper with the erroneous headline and posed for photographs with it … a famous, famous photo, that must have stuck in the craw of the editor at the time.

“Gie” is a variant of “give” used sometimes by Scots, and maybe even by poet Robert Burns.