Constructed by: Andrew Kingsley & John Lieb
Edited by: Will Shortz 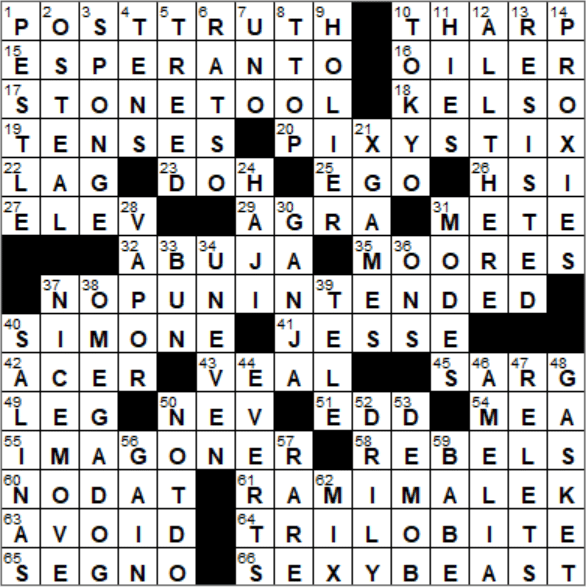 1. Like a world in which objective facts are less important than appeals to emotion and personal belief : POST-TRUTH

The term “post-truth” was coined by playwright Steve Tesich in an essay in the “The Nation”. Referencing Watergate, Iran-Contra and the Persian Gulf War, Tesich said “we, as a free people, have freely decided that we want to live in some post-truth world.” The derivative phrase “post-truth era” was introduced by author Ralph Keyes when he used it for the title of a 2004 book “The Post-Truth Era: Dishonesty and Deception in Contemporary Life”.

10. Tony-winning choreographer for “Movin’ Out” : THARP

I love Twyla Tharp’s choreography, and her patented “moves”. Tharp was born in Portland, Indiana in 1941. She was named after Twila Thornburg, the “Pig Princess” of the 89th Annual Muncie Fair in Indiana. That’s one to tell to the grandkids …

I strongly recommend the Twyla Tharp musical “Movin’ Out”, a modern dance work that’s built around the music of Billy Joel. There’s no dialog, and a pretty thin plot, but it’s a wonderful series of fabulously choreographed dances to Joel hits. It’s guaranteed to have you dancing in aisles.

15. Language in which plural adjectives end in -aj : ESPERANTO

Esperanto is an international language specially constructed to create some level of harmony between people from different parts of the world. It was created in the late 1800s by an opthamologist from modern-day Poland. Tens of thousands, and maybe even millions of people speak Esperanto, some being taught it as a native language from birth.

29. City that inspired a palace in “Aladdin” : AGRA

40. Philosopher Weil who said “All sins are attempts to fill voids” : SIMONE

Simone Weil was a French philosopher. Weil died in 1943 in England from malnutrition. She had put herself on a very restricted diet asserting that she would only eat what she believed French citizens were eating in German-occupied France.

The character Jesse Pinkman in the TV drama “Breaking Bad” is drug dealer and former student who teams up with his old chemistry teacher to produce high-grade meth. Pinkman is played by actor Aaron Paul.

Tony Sarg was a German-American puppeteer and illustrator. He was hired by Macy’s in 1928 to build helium-filled “puppets” for their Thanksgiving Day Parade in New York City, a tradition that was to last a long time. In 1935 he designed and built the puppets and displays in Macy’s windows for Thanksgiving and Christmas.

I well remember actor Edd Byrnes playing “Kookie” in the detective show “77 Sunset Strip” in the early sixties. Byrne’s role in the pilot episode was a contract killer, but audience response to his persona was so positive that the producers wrote in the character “Kookie” as a lead. Byrnes’ other famous role was on the big screen, playing dance-show host Vince Fontaine in 1978’s “Grease”.

I’ve always loved the sound of the words “mortar” and “pestle”, ever since I was first introduced to them in the chemistry lab. The Romans called a receptacle for pounding or grinding things a “mortarium”, giving us “mortar”. Mortarium was also the word for the product of pounding and grinding, which gives us our “mortar” that’s used with bricks to build a wall. And further, short stubby cannons used in the 16th century resembled a grinding bowl and so were called “mortars”, which evolved into our contemporary weapon of the same name. As far as the pestle is concerned, it is also derived from its Latin name “pistillum”, which comes from the word for “crush”.

7. Game whose direction of play can shift from clockwise to counterclockwise : UNO

10. City that’s home to the most Michelin three-star restaurants : TOKYO

The Greater Tokyo Area is the most populous metropolitan area on the planet. 51 of the Fortune Global 500 companies are headquartered in Tokyo. And the residents of Tokyo eat very well. Michelin has awarded more Michelin stars to Tokyo than any other city in the world.

“Of Mice and Men” is a novella written by American author John Steinbeck, published in 1937. The title comes from the famous poem by Robert Burns, “To a Mouse”. The inspirational line from the poem is “The best-laid schemes o’ mice an’ men, gang aft tagley.” Steinbeck actually wrote “Of Mice and Men” as a “novel-play”, intending that the line from the novel used as a script for a play. I actually saw the theatrical version on stage for the first time quite recently, and really enjoyed it.

After WWII, there were about five million personnel in the British military. The process of “demobilising” these forces started about six weeks after Victory in Europe was declared, but there was tremendous frustration at the perceived slow rate at which men and women returned to “civvy street”. One of the symbols of demobilisation in Britain was the civilian suit of clues issued to each individual, the so-called “demob suit”.

The official gold bullion coin of the US is known as the American Gold Eagle. The 1-ounce coin has a face value of $50, but is valued at well over $1,000 as it is comprised of over 90% 22-karat gold.

59. Object of the search by the Three Wise Men : BABE

The drink we know today as Kool-Aid was invented by Edward Perkins and his wife, in Perkins’ mother’s kitchen in southwest Nebraska. Kool-Aid is now the Official Soft Drink of the state.