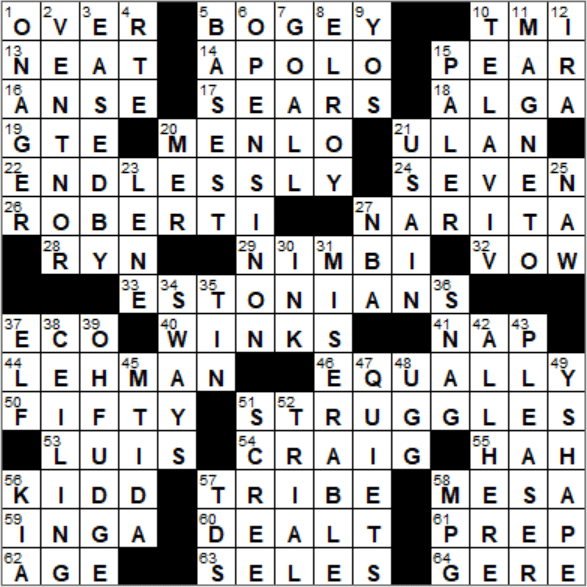 “As I Lay Dying” is a novel by William Faulkner first published in 1930. The book has an unusual structure, with stream of consciousness writing throughout. There is one whole chapter that I’d like to quote here:

Menlo Park, New Jersey is noted as the home to Thomas Edison’s laboratory where he made so many of his inventions. We also have a pretty well-known Menlo Park out here in California, home to many of the venture capital companies that tend to make a lot of money out of Silicon Valley businesses.

The name of Mongolia’s capital city Ulan Bator translates as “the Red Hero”. The “Red Hero” name was chosen in honor of the country’s national hero, Damdin Sükhbaatar. Sükhbaatar fought alongside the Soviet Red Army in the fight for liberation from Chinese occupation.

26. Father of William the Conqueror : ROBERT I

Robert I, Duke of Normandy is perhaps best remembered as the father of William the Conqueror. William was born to Robert and his mistress Herleva of Falaise, which earned the boy the moniker William the Bastard.

The Battle of Hastings took place in the South East of England in 1066. The battle took place between the native Anglo-Saxons led by King Harold Godwinson, and the Norman-French led by Duke William II of Normandy. William emerged victorious, earning him the moniker William the Conqueror, and the crown of England as William I. The victory also launched the Norman conquest of England.

Plans were put together for the construction of Narita International Airport back in 1966. However, the airport was not a popular addition to the metropolis in some quarters and demonstrations, often violent, delayed the project. Originally planned for completion in 1971, the airport didn’t open until 1978. The opening ceremony was attended by about 6,000 protesters and 14,000 security police.

A nimbus (plural “nimbi”) is a halo, or an aura. “Nimbus” is Latin, and can also translate as “cloud”.

General Douglas MacArthur made his famous declaration “I came through and I shall return” in Melbourne, Australia in 1942. The remarks followed his escape from the Philippines after the Japanese invasion. MacArthur and his family departed from the heavily fortified Corregidor Island in Manila Bay in a PT boat (PT-41). PT-41 joined up with three other PT boats and made a perilous two-day journey through Japanese-patrolled waters to the southern Philippine island of Mindanao. From Mindanao the party flew to Australia. MacArthur did eventually return to the Philippines as he had promised, arriving back on Corregidor in March 1945 on a PT boat.

33. Citizens of the only country that relies significantly on online voting in elections : ESTONIANS

The European nation of Estonia has embraced the concept of electronic voting. Each citizen is issued an ID card that includes a chip. The ID card allows a citizen to cast a vote via the Internet using a computer with a card reader. One advantage of electronic voting in Estonia is that votes can be cast early, but can be changed right up to the end of election day.

English actor Daniel Craig rocketed to fame in 2005 when he was chosen to replace Pierce Brosnan as James Bond in the series of films based on Ian Fleming’s character. One of Craig’s most famous appearances as Bond was alongside Queen Elizabeth II in the opening ceremony of the London 2012 Olympics. Craig married actress Rachel Weisz in 2011.

56. Pirate captain whose treasure was thought to be buried on Oak Island : KIDD

William Kidd was a Scottish privateer who went by the name “Captain Kidd”. Although Kidd was a privateer, someone authorized by the government to attack foreign shipping, he was eventually arrested and executed for piracy. There is common opinion held today that the charges against Kidd were actually trumped up. Captain Kidd’s story was the basis of a 1945 film called “Captain Kidd” starring Charles Laughton in the title role. Laughton also appeared as Captain Kidd in 1952’s comic movie “Abbott and Costello Meet Captain Kidd”.

Canyonlands is a magnificent National Park in southeast Utah located not far from Moab. The canyons in the park, and the associated mesas and buttes, were formed mainly by the Colorado and Green Rivers.

Inga Swenson is an American actress. Her best known role was “Gretchen Kraus”, the German cook and later housekeeper on the TV show “Benson”. Swenson also appeared in a couple of episodes of “Bonanza” playing the second wife of Ben Cartwright (Lorne Greene), and mother of Hoss Cartwright (Dan Blocker). This was despite the fact that in real life she was actually 4 years younger than Blocker!

Monica Seles has a Hungarian name as she was born to Hungarian parents, in former Yugoslavia. Seles was the World No. 1 professional tennis player in 1991 and 1992 before being forced from the sport when she was stabbed by a spectator at a match in 1993. She did return to the game two years later, but never achieved the same level of success.

1. Asiatic animal with a mane : ONAGER

The onager is also known as the Asiatic wild ass. The onager is a little larger than a donkey, and looks like a cross between a donkey and a horse. One characteristic of the onager is that it is remarkably “untamable”.

Ventnor Avenue is a property in the game of Monopoly. The street names in the US version of Monopoly are locations in or around Atlantic City, New Jersey.

“The Jetsons” is an animated show from Hanna-Barbera that had its first run in 1962-1963, and then was recreated in 1985-1987. When it was debuted in 1963 by ABC, “The Jetsons” was the network’s first ever color broadcast. “The Jetsons” are like a space-age version of “The Flintstones”. The four Jetson family members are George and Jane, the parents, and children Judy and Elroy. Residing with the family in Orbit City are Rosie the household robot and Astro the pet dog.

In the Marvel Comics universe, Magneto is a powerful mutant and an enemy of the X-Men. As his name implies, Magneto’s superhuman ability is that he can generate and control magnetic fields. Magneto has been portrayed on the big screen in the “X-Men” series of films by Sir Ian McKellen, and by Michael Fassbender.

“La Mer” is a lovely group of three symphonic sketches for orchestra by the French composer Claude Debussy. Listen to it, and you can feel yourself at the ocean. “La Mer” is French for “The Sea”.

Michael Jordan is considered by many to be the greatest basketball player of all time. Not only is he a talented sportsman, but he is also very successful in the business world. His is now the majority owner of the Charlotte Bobcats NBA team. Fans refer to Jordan as “His Airness”.

English actor Orlando Bloom’s breakthrough on the big screen came when he was chosen to play the Sindarin Elf Legolas in “The Lord of the Rings” series of films.

45. Greek peak on which Zeus was hidden as an infant : MT IDA

Accounting to mythology, Zeus was born in a cave at Mount Ida, the highest peak on the island of Crete.

51. Patch of loose rocks at the base of a cliff : SCREE

When a rock face erodes, lumps of rock and dust fall to the ground. The pile of rocks gathered around the rock face is called scree, a word derived from the old Norwegian term for a landslide.

South Korean automaker Kia have been making the subcompact model called the Rio since 2000.