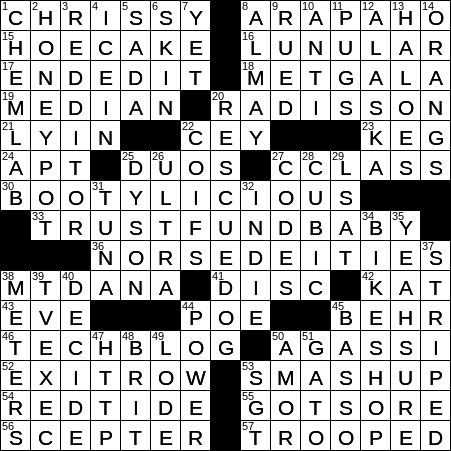 The tremendously successful US sitcom “Three’s Company” ran from 1977 to 1984. The show was actually a remake of an equally successful British sitcom called “Man About the House”. I must, I was a fan of both shows. The American show started its run with three roommates, played by Joyce DeWitt, Suzanne Somers and John Ritter. The trio lived in an apartment building owned by characters Stanley and Helen Roper. The Ropers were eventually replaced by landlord Ralph Furley, played by the marvelous Don Knotts.

Destiny’s Child was an R&B group active from 1960 to 2006. The trio’s lineup changed over the years, and probably the most famous former member of the group is Beyoncé Knowles.

36. Figures in the Edda : NORSE DEITIES

The name of the Behr brand of paint is pronounced “bear”, and the cans even have a bear logo. The company was founded in 1947 by Otho Behr, Jr.

50. Autobiographer who wrote that tennis is “the loneliest sport” : AGASSI

Sada Thompson was an actress from Des Moines, Iowa. Thompson is best known for playing the mother and wife in the eighties television drama series called “Family”.

“Pug” is a slang term for fighter, and for a boxer in particular. The term is short for “pugilist”.

“Into the Wild” is an interesting film directed by Sean Penn that is based on a nonfiction book of the same name by Jon Krakauer. The book and movie tell the true story of Christopher McCandless, a young man who hiked into the Alaskan wilderness with very little food and equipment, seeking an extended period of solitude. After four months alone he was found dead from starvation. At time of death, he weighed only 67 pounds.

29. What the Clintons each took before they met, in brief : LSAT

45. The assassin Sparafucile, in “Rigoletto” : BASSO

“Rigoletto” is one of Giuseppe Verdi’s most famous and oft-performed operas. The storyline comes from a Victor Hugo play called “Le roi s’amuse” (usually translated as “The King’s Fool”). Rigoletto is that king’s fool, the jester.