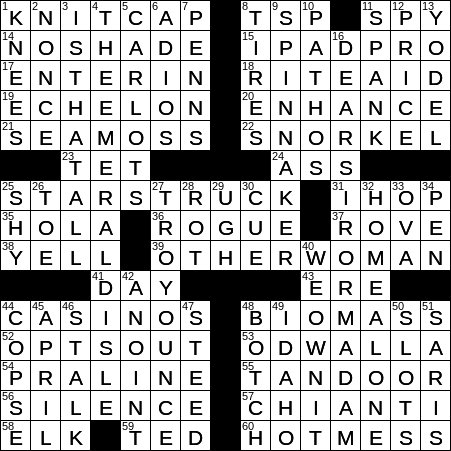 A balaclava is a piece of headgear that covers the whole head, exposing only the face or part of the face. This warm headgear was originally knitted and sent to British troops who were fighting in bitter cold weather in the Crimean War. The “helmet” took its name from the town of Balaklava that is near Sevastopol in Crimea, Ukraine.

Walgreens is the largest chain of drugstores in the United States, with over 7,500 retail outlets. The company is named for the owner of the first store and founder of the chain, Charles R. Walgreen. Also, Walgreens claims to have introduced the malted milkshake, in 1922.

31. Commercial name that becomes a Native American tribe if you move its first letter to the end : IHOP

Many of the Hopi nation live on a reservation that is actually located within the much larger Navajo reservation in Arizona.

A praline is a candy made made out of nuts and sugar syrup. The first pralines were made in France in the 17th century for an industrialist named Marshal du Plessis-Praslin, who gave his name to the confection.

A group of elk is known as a gang.

The quaint phrase “for the nonce” means “for the present, for now”.

The term “adiós” is Spanish for “goodbye”. In the Spanish language, “adiós” comes from the phrase “a Dios vos acomiendo” meaning “I commend you to God”.

Penn’s Landing along the Delaware river in Philadelphia is a waterfront area named for William Penn, the city’s founder. Penn landed near Penn’s Landing when he first arrived in the area.

Rhetoric is the art of speaking or writing effectively, primarily with the intent to persuade. Aristotle defined three persuasive techniques that can be used to persuade an audience:

The system of troy weights is now only used to measure the mass of precious metals and gemstones. The name “troy” likely came from the French town of Troyes, which was famous for trading with the English as far back as the 9th century.

32. Classic film with a screaming boy on its poster : HOME ALONE

“2 Chainz” is the stage name of rapper Tauheed Epps.

A copse is a small stand of trees. The term “copse” originally applied to a small thicket that was specifically grown for cutting.

45. When the Boston Marathon is held : APRIL

The Boston Marathon is the world’s oldest annual marathon, outside of the Olympic event. The first Boston Marathon was held way back in 1897 to celebrate Patriots’ Day, which commemorates the Battles of Lexington and Concord at the start of the American Revolution.