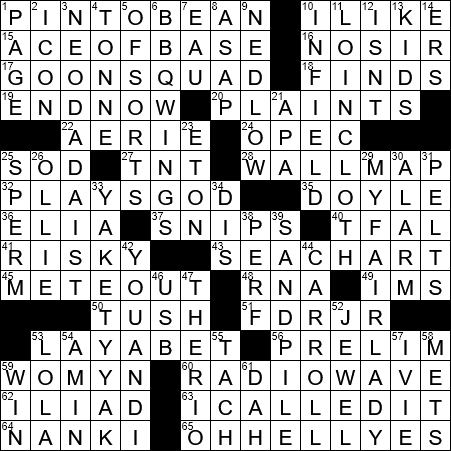 An aerie is the nest of an eagle, and is also known as an eyrie.

Equatorial Guinea is the only country on the African continent that has Spanish as her official language. The nation, located on the central west coast, was formerly the colony of Spanish Guinea and gained independence from Spain in 1968.

35. Detective in “The French Connection” : DOYLE

New York cop Eddie Egan was responsible for breaking up an organized crime ring in the city in 1961, and the seizing of a record amount of heroin (112 pounds). His exploits were chronicled in a book by Robin Moore, which in turn was the basis of the movie “The French Connection” released in 1971. Gene Hackman played Popeye Doyle in the movie, the character based on Egan. Paradoxically, when Egan retired from the police force he started acting and played small roles in 22 movies and television shows.

Even though instant messaging (sending IMs) has been around since the 1960s, it was AOL who popularized the term “instant message” in the eighties and nineties. The “AOL Instant Message” service was known as AIM.

Some feminists use an alternative spelling for the word “women”, including “womyn” and “womban”.

62. Whence the line “Beauty, terrible beauty! A deathless goddess – so she strikes our eyes!” : ILIAD

“The Mikado” is a wonderful comic opera by Gilbert and Sullivan that is set in the exotic location of Japan. “Mikado” is a word formerly used for the “Emperor of Japan”. In the story, Nanki-Poo is the Mikado’s son, who falls in love with Yum-Yum.

The Neo-Dada movement in art and literature was alive and well in the fifties and sixties. The label “Neo-Dada” reflects the similarities with the earlier Dada movement that thrived in the early 1900s. One of the more famous names associated with the Neo-Dada is Yoko Ono.

4. Equivalent of a megagram : TONNE

14. Where victims of arrests are taken, for short : ERS

29. Classic musical with the song “A Hymn to Him” : MY FAIR LADY

A pelt is the skin of a furry animal.

44. Coiner of the words “chortle” and “frabjous” : CARROLL

47. Home of Vegas’s World Series of Poker : THE RIO

Idi Amin received most of his military training in the British armed forces, eventually achieving the highest rank possible for a Black African in the British Colonial Army in 1959, that of Warrant Officer. On his return to Uganda Amin joined his country’s military and quickly rose to the rank of Deputy Commander of the Army. During that time he was quite the athlete. He was a noted rugby player and swimmer, and for nine years held the Ugandan national light-heavyweight boxing title. By the early seventies, Amin was commander of all the armed forces of Uganda and in 1971 seized power in a military coup, displacing the country’s president Milton Obote. There followed seven years of brutal rule by Amin during which it is estimated that between 100,000 and 500,000 people were murdered. Amin was ousted from power in 1979 after a war with Tanzania, and fled to Libya where he stayed for a year. He then moved to Saudi Arabia, where he was financially supported by the Saudi Royal Family for the remainder of his life. Amin died in 2003.