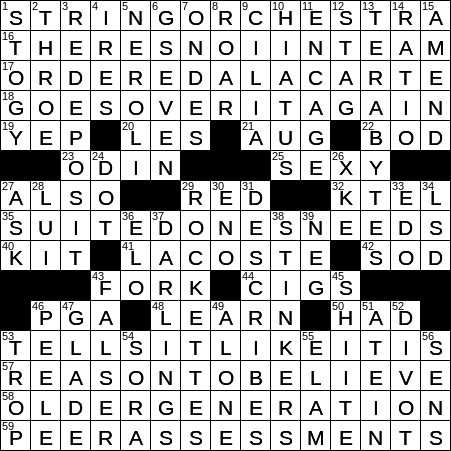 Constructed by: Jason Flinn
Edited by: Will Shortz

Our contemporary word “throe”, meaning a spasm of pain, has been around since the early 1600s. It is a different spelling of the word “throwe” that had been around since around 1200 AD and which meant pain, particularly a pang of childbirth or the agony of death. Pain, from cradle to grave …

6. International group whose leaders meet once a year : G-SEVEN

The G6 was a group of six industrialized nations that formed in 1975 and whose governments met on a periodic basis. The founding members were France, Germany, Italy, Japan, the UK and the US. The membership expanded in 1976 with the addition of Canada, forming the G7. Russia was given representation in the group in 1997, forming the G8. Russia’s membership was suspended in 2014 after she annexed Crimea.

A “hiatus” is a break or opening in a material object. “Hiatus” is Latin for “opening”.

I’m not sure what the meaning is here. Are we perhaps referring to the dot over the letter I in the word “times”? Or maybe the dot in a URL such as “NYTCrossword.com” is a sign of these modern times? Or, more likely, it’s something going over my head …

XK and XKE are models of Jaguar motor car.

The famous Rockettes can be seen in Radio City Music Hall. They have an amazing schedule during the Christmas season when they perform five high-kicking shows every day, seven days a week. The troupe has been doing this every Christmas for 77 years.

34. Cause of some flashbacks, for short : LSD

Glade is a brand of air fresheners that was introduced in 1956.

We use the term “de trop” to mean “too much, too many”. In the original French, “de trop” translates as “in excess”.

The sora is a waterbird that is sometimes known as the sora rail or sora crake. Soras can be found in breeding season in marshes across most of North America.

55. Ancient land located in what is now southwest Iran : ELAM

The ancient civilization of Elam was located east of Mesopotamia in what is modern-day southwest Iran.