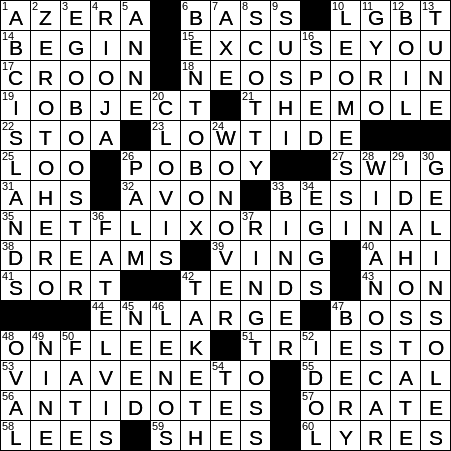 The Hyundai Azera was the name used worldwide for the model known as the Hyundai Grandeur in its homeland of South Korea. The Azera was produced from 1986 to 1992.

Anderson Cooper is a respected news personality on CNN and on various shows around the dial. My favorite appearances of his, although he would call them trivial I am sure, was as host of a great reality game show called “The Mole” that aired in 2001.

A stoa was a covered walkway in Ancient Greece. A stoa usually consisted of columns lining the side of a building or buildings, with another row of columns defining the other side of the walkway. The columns supported a roof. Often stoae would surround marketplaces in large cities.

A po’ boy is a submarine sandwich from Louisiana. There are a lot of theories about where the name came from, and none sound too convincing to me. A po’ boy differs from a regular submarine sandwich in that it uses Louisiana French bread, which is soft in the middle and crusty on the outside.

Avon was a noted publisher of comic books and paperbacks. The company was founded in 1941 and focused on lowbrow literature designed for popular appeal, especially romance novels.

Netflix was founded in Los Gatos, California in 1997 as a DVD rental company that sent out titles by mail. Netflix no longer focuses on distribution by mail, and instead provides programming on demand. The company is now making a big play in the production of films and TV programs.

The hit TV show “House of Cards” is a political drama that highlights ruthless manipulation within the corridors of power in Washington, D.C. The show is an adaptation of a BBC miniseries of the same name, which in turn is based on a novel by Michael Dobbs.

“On fleek” is a phrase meaning “flawlessly styled” that was coined in a video by teenager Kayla Newman a.k.a. Peaches Monroee. Apparently, Kayla was referring to eyebrows being “on fleek”, and the term went viral. How, and why, I don’t know. I’m just so old and out of it at this stage …

53. Major thoroughfare in Rome : VIA VENETO

Via Veneto (actually “Via Vittorio Veneto”) is an upmarket street in Rome, and the address of many of the pricier hotels. It was made famous in Federico Fellini’s “La Dolce Vita”, and is still the home to Harry’s Bar and Café de Paris, which were both featured in the movie.

Back in the 1600s, “tub” was slang for “pulpit”. This led to a preacher being referred to as a “tub-thumper”, a speaker in the habit (pun!) of thumping the pulpit to emphasize a point.

60. Apollo played with them : LYRES

The lyre is a stringed instrument most closely associated with Ancient Greece, and with the gods Hermes and Apollo in particular. According to myth, Hermes slaughtered a cow from a sacred herd belonging to Apollo and offered it to the gods but kept the entrails. Hermes used the entrails to make strings that he stretched across the shell of a tortoise, creating the first lyre. Apollo liked the sound from the lyre and agreed to accept it as a trade for his herd of cattle.

1. Vacation destinations off the coast of Venezuela : ABC ISLANDS

“ABC Islands” is a name given to the three westernmost islands of the Leeward Antilles in the Caribbean. The nickname comes from the first letters of the island names: Aruba, Bonaire and Curaçao. All three of the ABC Islands are part of the Kingdom of the Netherlands.

A bento is a single-person meal that is commonly eaten in Japan. A bento can be purchased as a take-out meal, or it may be packed at home. A bento is usually sold as a “bento box”.

28. What every actor would probably like to do : WIN AN OSCAR

Idaho State University is located in Pocatello, Idaho. The school was founded in 1901 as the Academy of Idaho.

Elvis Aron Presley (aka “the King”) was the younger of two identical twins. His brother was stillborn, and delivered 35 minutes before Elvis. The brother was named Jesse Garon Presley. So, although born a twin, Elvis was raised as an only child.

According to the Book of Job:

… Naked came I out of my mother’s womb, and naked shall I return thither: the Lord gave, and the Lord hath taken away; blessed be the name of the Lord.

Baccarat, in all of its three variants, is a relatively simple casino card game. Baccarat is the favored game of chance for James Bond 007, and it looks so cool when he plays it! Banco!