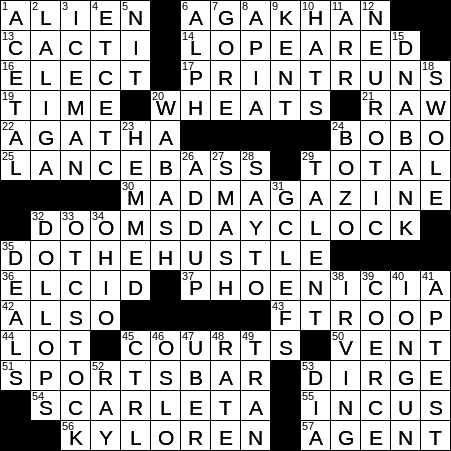 “Aga Khan” is a hereditary title of the Imam of a large sect within the Shi’a Muslim faith. The current Aga Khan is Shah Karim al-Hussayni, who has held the position since 1957.

13. Ones sticking around a desert? : CACTI

NSYNC was a boy band from Orlando, Florida that was formed in 1995. The name of the group came from a comment by the mother of band member Justin Timberlake, who said the boys voices sounded “in sync”. But, it’s also true that the letters of the name NSYNC are the last letters of the given names of the five band members:

35. Perform a disco dance : DO THE HUSTLE

The ancient kingdom of Phoenicia lay on the Mediterranean in the region making up much of modern-day Syria, Lebanon and Israel. The Latin for “Phoenicia” is “Poenus”, giving us the term “Punic”, as in “Punic Wars”.

Relatively few people outside of the US saw the American sitcom “F-Troop”, which was made in the sixties. I remember watching the show as a young lad because it was picked up by the Irish national television service. The only other country that showed “F-Troop” was Australia.

A “dirge” is a slow and mournful musical piece, like a funeral hymn.

The main character in Nathaniel Hawthorne’s novel “The Scarlet Letter” is Hester Prynne. After the birth of her illegitimate daughter Pearl, she is convicted by her puritanical neighbors of the crime of adultery. Hester is forced to wear a scarlet “A” (for “adultery”) on her clothing for the rest of her life, hence the novel’s title “The Scarlet Letter”.

Acetals are a class of organic compounds, the smaller of which are volatile solvents. The simplest of the group is named simply “acetal”, and is a solvent and ingredient used in cosmetics. A much larger example of an acetal is cellulose.

9. Surname at the Daily Planet : KENT

International Talk Like a Pirate (TALP) Day is September 19th every year, a “holiday” that was created in 1995. The event started out as an inside joke between John Baur and Mark Summers of Albany, Oregon, but when they shared the notion with the columnist Dave Barry, he promoted the idea and it took off.

I know, I know. “Swole” means nothing me either …

20. Border river in the Midwest : WABASH

The Wabash River is the largest northern tributary of the Ohio River. The Wabash is the state river of Indiana, and forms much of the border between the Indiana and Illinois. The river takes its name from the French “Ouabache”, a word that French traders adopted from a Miami Indian word meaning “it shines white”.

Bozo the Clown is a character created in 1946 by Alan Livingston. Bozo was introduced in the first ever “record reader”, a children’s illustrated read-along book that came with a vinyl recording of the story. The book/record was so successful that Bozo moved to television, and he has been around ever since.

The novelist and screenwriter John Irving became famous with publication of his novel “The World According to Garp”. As a screenwriter Irving won an Oscar for the screen adaptation he wrote for another of his novels, “The Cider House Rules”.

41. Source of springtime stress for a H.S. student : AP TEST

45. Part of many common shortcuts : CTRL