Constructed by: Sam Ezersky & David Steinberg
Edited by: Will Shortz 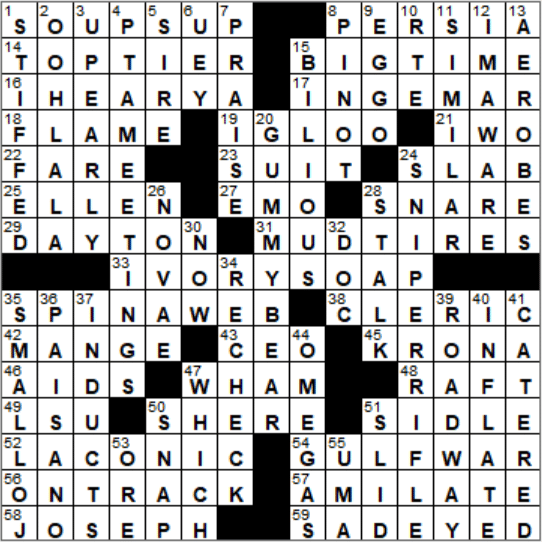 1. Adds horsepower to : SOUPS UP

“300” is a fantasy film released in 2006 that gives a fictional account of the Battle of Thermopylae that was fought between the Persians and the Greeks (most notably, the Spartans).

The Battle of Thermopylae took place in 480 BC, fought between the Persian Empire of Xerxes and an alliance of Greek city-states led by Sparta. The Greeks chose the narrow pass of Thermopylae to make a stand against the advancing Persian army, as there they could minimize the advantage that the Persians had with their large army. The pass of Thermopylae was so narrow that only one chariot could pass through at a time. Famously, the vastly outnumbered Spartan forces (the “300”) held this pass with hand-to-hand combat for two full days, until a local resident showed the Persians a way around the pass so that the Greek army could be attacked and annihilated from the rear.

The “Marianas” is a familiar name for the Mariana Islands that lie in the Pacific Ocean south of Japan and north of New Guinea. The “Mariana” Trench (note there is no “s” on the end of Mariana) is the lowest elevation on the surface of the Earth’s crust. The Mariana Trench takes its name from the Islands, as it lies just to the east of the Marianas.

Dashboard Confessional is an emo band from Boca Raton, Florida.

29. Midwest city that was home to the Wright brothers : DAYTON

Wilbur was the older of the two Wright brothers, and he was born in 1867 in Millville, Indiana. By the time that Orville was born in 1871, the family was living in Dayton, Ohio. The Wrights spent a few years of their youth back in Richmond, Indiana, before settling in Dayton for the rest of their lives. The brothers both died in Dayton; Wilbur in 1912 and Orville in 1948.

33. Product whose original slogan was “It floats” : IVORY SOAP

43. One who might meet with a venture capitalist, for short : CEO

48. Vessel that rhymes with a nautical direction : RAFT

In Rudyard Kipling’s “Jungle Book”, the author names his regal tiger character “Shere Khan”. Kipling chose this name as he had met an Afghan Prince in his travels named “Sher Shah Suri”, meaning “The Lion or Tiger King”.

Ancient Laconia was a region in southern Greece that was dominated by the city of Sparta. The people from Laconia were proud of their brevity of speech, which gives rise our modern term “laconic” meaning someone who uses few words.

Marines are called jarheads because of their high and tight regulation haircuts, at least that’s the story I read …

58. Figure in a Nativity scene : JOSEPH

In the Christian tradition, a nativity scene (also “crèche”) is a display of representing the the scene of the birth of Jesus. Nativity scenes might be subjects for paintings, for example, although the term is usually used for seasonal displays associated with the Christmas season.

1. Left without leaving anything : STIFFED

The etymology of our verb “to stiff”, meaning “to fail to tip”, seems unclear. The usage originated in the late 1930s, and is possibly an extension of the noun “stiff” meaning “corpse”. The idea is that dead men don’t leave tips.

The term “bilious” means “relating to bile”. It has come to mean ”ill-humored”.

Cattails are flowering plants found in wetlands. We call them bullrushes back in Ireland …

“Paisano” translates literally from Spanish as “fellow countryman”, but is also used to mean “pal”.