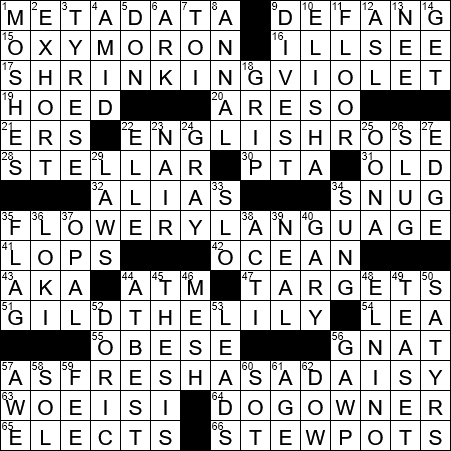 Themed answers are phrases that include the name of a FLOWER:

1. Information about other information : METADATA

Poseidon was the god of the sea in Greek mythology as well as the “Earth-Shaker”, the god responsible for earthquakes.

I’d have written the single word “crosshairs” rather than “cross hairs”. But maybe that’s just me …

51. Try to improve what is already beautiful : GILD THE LILY

64. One registering with the American Kennel Club : DOG OWNER

Tyrese Gibson is singer-songwriter and actor who is known simply as “Tyrese”. Tyrese is best known for playing the character Roman Pearce in the “Fast And Furious” series of movies.

A Mafioso is a member of the Mafia, with the plural being Mafiosi (or sometimes “Mafiosos”).

Nair is a hair removal product that has some pretty harsh ingredients. The most important active constituents are calcium hydroxide (“slaked lime”) and sodium hydroxide (“caustic soda”). Other Nair components seem to be there to soothe the skin after the harsher chemicals have done their job. The name “Nair” probably comes from combining “no” and “hair”.

Neal Boortz is a radio commentator and author. Boortz is a very vocal libertarian who advocates a complete overhaul of the tax system in the US, as well as the release on non-violent drug offenders.