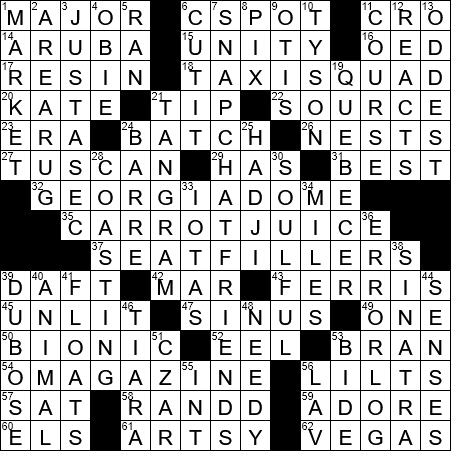 “Kokomo” is song released by the Beach Boys in 1988. It describes a trip taken by a couple to a fictional island off the Florida Keys called Kokomo. The success of the song led to at least one Florida resort adopting the name.

The Balm of Gilead tree is also known as the balsam poplar. The tree’s resin is extracted for use in cough syrups and as a first-aid salve.

The scout team (or “taxi squad”) is a group of football players whose job is to play like future opponents for the main team. The scout team may not be the best athletes, but they learn particular plays designed to help the main team prepare for an upcoming game.

Bionic limbs are in fact a reality, although a relatively small number of amputees have been fitted with them. Bionic limbs depend on the fact that the brain continues to send out messages to nerves that have been truncated through amputation. The nerve stub is redirected to a set of chest muscles, so when the person thinks “open the hand” say, that cause a chest muscle to contract. Electrodes placed on the surface of the chest muscle detects its movement, and that signal is sent to the prosthetic limb, causing it to move. Science can be so wonderful …

54. Periodical whose founder has appeared on every cover since its 2000 launch : O MAGAZINE

The full name of the publication usually called “O”, is “O: The Oprah Magazine”. Since the magazine’s founding in 2000, Oprah has appeared alone on the cover of each issue, with two exceptions. On the April 2009 cover Oprah was shown with First Lady Michelle Obama, and on the December 2009 cover Oprah shared the limelight with Ellen DeGeneres.

The Excalibur Hotel and Casino is a Medieval-themed resort. The exterior of the building is reminiscent of a castle, and there’s a famous dinner show featuring knights and horses called “Tournament of Kings”.

7. Ones sharing some shots : SNAPCHAT FRIENDS

The boxer Mike Tyson, nicknamed “Iron Mike”, has said some pretty graphic things about his opponents. For example:

A tangram is a flat puzzle consisting of seven different shapes that must be arranged to form specific shapes. The game was invented in China, and the name for the puzzle in Chinese translates as “seven boards of skill”. The seven shapes are called “tans” hence the “tangram” name used in English.

38. Member of the Hoboken Four : SINATRA

40. Many an Aesop character : ANIMAL

Aesop is remembered today as a fabulist, a writer of fables. Aesop lived in Ancient Greece, probably around the sixth century BC. Supposedly he was born a slave, somehow became a free man, but then met with a sorry end. Aesop was sent to the city of Delphi on a diplomatic mission but instead insulted the Delphians. He was tried on a trumped-up charge of stealing from a temple, sentenced to death and was thrown off a cliff.

In the halcyon days of yore, a “soda jerk” was usually a young person whose main job was to serve ice cream sodas in a drugstore. The server would “jerk” the handle on the soda fountain to dispense the soda water, giving the job its distinctive name.

IRS Form 1099 is a series of forms used to report various types of income, other than wages, salaries and tips that are reported on Form W-2. Examples are Form 1099-INT used to report interest income, and 1099-DIV used to report dividend income.