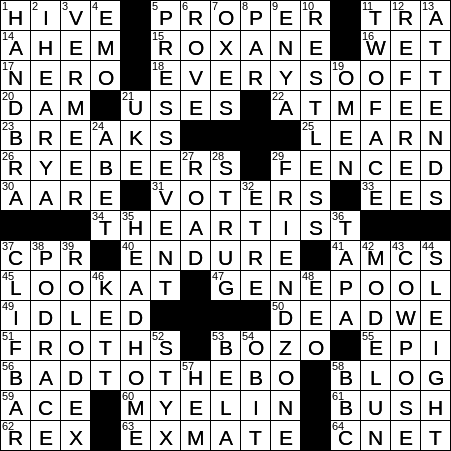 Today’s Theme (according to Bill): With Some Down

Themed answers are completed by adding a number written in the DOWN-direction in the grid:

Cyrano de Bergerac was a French dramatist who lived in the 17th century. Paintings and drawings show that Bergerac had a large nose, although the size was exaggerated by those who wrote about his life. Reputedly, Cyrano fought in over 1000 duels, mostly instigated by someone insulting his nose. In the play written about his life, Cyrano had a famous lover named Roxane. It is thought that the Roxane character was modeled on Cyrano’s cousin who lived with his sister in a convent.

A moat is a protective trench that surrounds a castle, say, or a an exhibit in a zoo. A moat may or may not be filled with water.

30. European river that originates from a glacier : AARE

The Aar (also called the “Aare” in German) is the longest river entirely in Switzerland. The Aar is a major tributary of the Rhine and flows through Bern, the nation’s capital.

33. Some Tesla employees, in brief : EES

“The Artist” is a 2011 movie from France that was filmed in black-and-white, and without sound. This dated format reflects the movie’s subject matter. The story takes place in Hollywood during the days when silent movies were being replaced by “talkies”. “The Artist” has won more awards than any other French film in history, including a Best Picture Oscar.

When Nash-Kelvinator Corporation and Hudson Motor Car Company came together in 1954, it was the largest US corporate merger to date. The new company was called American Motors Corporation (AMC), and was of a size that could compete with the “Big Three” automakers. A few months after the merger, George W. Romney was given the top job at AMC. George was father of presidential candidate Mitt Romney.

The Gremlin is a subcompact car that was made by AMC in the 1970s. The Gremlin was positioned to compete with the Chevy Vega and Ford Pinto from the US, and with imports like the VW Beetle and Toyota Corona. On the list of ex-Gremlin drivers are Presidents Bill Clinton and George H. W. Bush.

The Hornet was a compact produced by AMC in the seventies. The Hornet platform was used in the design of the Gremlin, a smaller subcompact that was basically the front half of the Hornet with a truncated rear.

47. Makings of a population : GENE POOL

EpiPen is a brand name of epinephrine auto-injector. An EpiPen delivers a measured dose of epinephrine, usually for the treatment of an allergic reaction.

Many folks who visit this website regard it as just that, a website. That is true, but more correctly it is referred to as a blog, as I make regular posts (actually daily posts) that then occupy the “front page” of the site. The blog entries are in reverse chronological order, and one can just look back day-by-day, reading older and older posts. “Blog” is a contraction of the term “web log”.

Johannes (also “Jan”) Vermeer was born in the city of Delft in 1632, and died there some 43 years later. I just love Vermeer’s paintings, and his wonderful use of light. A great example of such a work is his “Girl with a Pearl Earring”. If you haven’t seen it, I thoroughly recommend the 2003 movie “Girl with a Pearl Earring” starring Scarlett Johansson as the girl in the painting, and Colin Firth as Vermeer. The movie is based on a novel of the same name by Tracy Chevalier, so it’s all just a great story as opposed to a documentary. The way the movie is shot really reflects the qualities of a Vermeer work of art.

Punxsutawney is a borough in Pennsylvania that is located about 80 miles northeast of Pittsburgh. Punxsutawney Phil is the famous groundhog that lives in the area. Phil comes out of his hole on February 2 each year and if he sees his shadow he goes back into his hole predicting six more weeks of winter weather. February 2 is known as “Groundhog Day”.

The Irish singer Enya co-wrote and performed two songs for the 2001 film “The Lord of the Rings: The Fellowship of the Ring”. Her song “May It Be” was nominated to that season’s Best Original Song Academy Award. The second number, called “Aniron”, was sung in Tolkien’s Elvish language called Sindarin.

In the Batman storyline, Harvey Dent was the squeaky-clean District Attorney of Gotham City. Dent worked alongside Batman to fight the city’s crime. However, during a trial of a mob boss, the defendant throws acid at him and scars the left side of Dent’s face. Dent loses his mind and becomes a criminal, calling himself “Two-Face” because of his unfortunate facial features. Two-Face decides whether to do good or evil deeds by flipping a coin.

Calpurnia Pisonis was the third and final wife of Julius Caesar.

21. Alternative to a mandolin, informally : UKE

Kerri Strug is that plucky little gymnast who made an outstanding final vault in the 1996 Atlanta Olympics despite having an injured ankle. I think we all remember her being carried off after her vault in the arms of the US team coach Bela Karolyi.

“Être humain” translates from French as “person, human being”.

36. Appetizer that may accompany sangria : TAPA

Sangria is red wine punch that is usually associated with Portugal and Spain. Recipes for sangria vary, but almost all include a robust red wine, sliced fruit, something sweet (e.g. orange juice, sugar), a spirit (e.g. brandy, triple sec), carbonated water or perhaps 7up, and ice. The drink is named for its color, as “sangre” is the Spanish for blood.

A CLIF Bar is an energy bar, and is the flagship product of Clif Bar and Company based in Emeryville, California. The CLIF Bar was developed by baker and former mountain guide Gary Erickson in 1990. He named it for his father Clifford.

Model United Nations is an educational simulation in which students learn about diplomacy, international relations and UN in general. Model UN conferences date back to the fifties.

“Etta Kett” was a comic strip that first ran in 1925. The strip ceased to be published in 1974, when creator Paul Robinson passed away. The initial intent was to offer tips to teenagers on manners and social graces, hence the name of the title character Etta Kett (sounds like “etiquette”).

The marvelous British Broadcasting Corporation (BBC) is mainly funded by the UK government through a television licence fee that is levied annually on all households watching TV transmissions. Currently the fee is 145 UK pounds, about 230 US dollars.