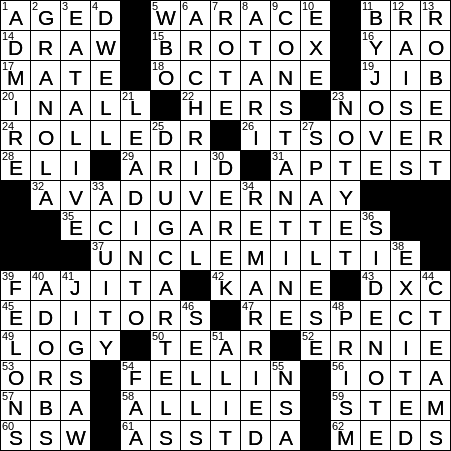 The lifting device known as a crane is so called because of its resemblance to the wading bird with the same name.

“Sommelier” is the French word for “wine steward”. If that steward is a female, then the French term is “sommelière”.

According to both the Gospel of Matthew and the Gospel of Mark in the Christian Bible, Jesus uttered the words “My God, my God, why have you forsaken me?” (“Eli, Eli, lama sabachthani?”) while hanging on the cross. This phrase is the only one that appears in more than one of the four gospels.

Comedian Milton Berle was known as “Uncle Miltie” and “Mr. Television”, and was arguably the first real star of American television. Berle was hosting “Texaco Star Theater” back in 1948.

1941’s “Citizen Kane” was the first film made by Orson Welles, and considered by many to be the finest film ever made. It’s a remarkable achievement by Wells, as he played the lead, and also produced and directed. Despite all the accolades for “Citizen Kane” over the decades, the movie was far from a commercial success in its early run and actually lost money at the box office.

In Roman numerals, 590 is written as DXC.

Something or someone that is described as “logy” is dull. “Logy” might come from the Dutch word “log” that means “heavy, dull”.

52. Ford in the Country Music Hall of Fame : ERNIE

Tennessee Ernie Ford was mainly a country singer, whose most famous recording was “Sixteen Tons”. “Sixteen Tons” is a song about life as a coal miner, with the title being a reference to sixteen tons of coal.

A scintilla is a small amount. The term can also be used to describe a spark or a flash (as in “to scintillate”). The term came into English from Latin, in which language it means “spark, particle of fire, atom”.

Nairobi is the capital and largest city in the African nation of Kenya. The city is named for the Nairobi River, which in turn takes its name from the Maasai “Enkare Nairobi” meaning “Cool Water”. Nairobi was founded in 1899 as a stop on the Kenya-Uganda railroad, at a time when the country was a British colony.

Johannesburg is the most populous city in South Africa. The city developed from a prospecting settlement, and was named after two surveyors: Johannes Meyer and Johannes Rissik.

9. Emperor who called the First Council of Nicaea : CONSTANTINE

Constantine the Great (aka Constantine I and St. Constantine) was Emperor of Rome from 306 to 337. Constantine was the first Roman Emperor to convert to Christianity, and along with co-Emperor Licinius he proclaimed religious tolerance throughout the Roman Empire. It was Constantine who gave his name to the city of Constantinople (now Istanbul). Also, the famous Arch of Constantine in Rome was built to commemorate one of Constantine’s military victories. This arch that was the model for many famous arches around the world including the Arc de Triomphe in Paris, Marble Arch in London, and the arch in the main facade of Union Station in Washington, DC.

“John Derek” was the stage name of Derek Delevan Harris, a native of Hollywood, California. Derek appeared in some notable films, including 1949’s “All the King’s Men” and 1956’s “The Ten Commandments”. Somewhat dissatisfied with a perceived lack of success as an actor, Derek turned to directing, and also became a recognized photographer. He had four very famous wives:

Frank Sinatra was married four times in all. His first wife, and mother of his three children, was Nancy Barbato. Barbato and Sinatra met in Jersey City while in their teens, and married in their early twenties in 1939. They divorced in 1951 following a string of affairs that Sinatra had after he moved his family to Hollywood. One of those very public affairs was with actress Ava Gardner, who became Sinatra’s second wife a few months after divorcing Barbato. That marriage lasted until 1957. Sinatra then married actress Mia Farrow, when she was 21 years old and he was 29 years her senior. That marriage only lasted a couple of years. Sinatra’s last marriage took place in 1976, and was Barbara Blakely Marx, the ex-wife of Zeppo Marx of the Marx Brothers.

“Adorbs!” is a colloquial term meaning “So cute, adorable!”

55. Org. in the documentary “Citizenfour” : NSA

“Citizenfour” is a 2014 documentary about Edward Snowden and his leaking of classified NSA information. Much of the film consists of footage that director Laura Poitras shot while interviewing Snowden in a hotel room in Hong Kong before the story broke.