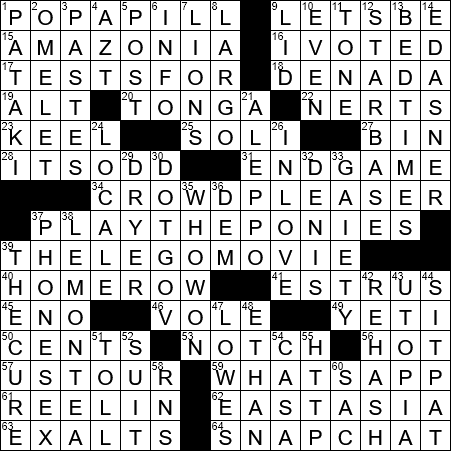 15. About a third of South America : AMAZONIA

Election Day was chosen by Congress back in 1845. The month of November was selected as it suited an agricultural society, following the fall harvest and yet not too far into winter, which could make travel difficult. Tuesday was chosen so that people had time to travel to polling stations. Monday elections might have meant that some would have to start out on Sunday, and that could interfere with Christian services.

20. Its capital is Nuku’alofa : TONGA

The estrous cycle of mammals can be divided into four phases:

Vole populations can really increase rapidly. Mama vole is pregnant for just three weeks before giving birth to litters of 5-10 baby voles. Then the young voles become sexually mature in just one month! If you have one pregnant vole in your yard, within a year you could have over a hundred of the little critters.

The yeti, also known as “the abominable snowman”, is a beast of legend. “Yeti” is a Tibetan term, and the beast is fabled to live in the Himalayan regions of Nepal and Tibet. Our equivalent legend in North America is that of Bigfoot, also known as Sasquatch. The study of animals whose existence have not yet been substantiated is called cryptozoology.

George Pataki is a member of the Republican Party who served as Governor of New York from 1995 to 2006. I happen to know that Pataki’s maternal grandmother is from a village close to where I lived in Ireland. When Pataki was first running for Governor, I met someone in Ireland who was researching Pataki’s Irish roots for him. My guess is that the Irish vote is important in New York State …

Largo is an instruction to play a piece of music with a very slow tempo. “Largo” is an Italian word meaning “broadly”.

14. Portrayer of Warren Buffett in HBO’s “Too Big to Fail” : ED ASNER

“Smitten” is a past participle of “smite” meaning “to inflict a heavy blow”. We tend to use “smitten” to mean “affected by love, love-struck”.

The White House website went live in 1994, although the design and content changes with each new administration. The website’s address is WhiteHouse.gov. It’s a good idea to note the ending of the address, because WhiteHouse.com used to be an adult site!

Margaret Thatcher served as Prime Minister of the UK from 1979 to 1990, making her the longest serving leader of the country in the 20th century, and the first woman to hold the office. Thatcher’s nickname in the press was the “Iron Lady”, a moniker bestowed on her by a Soviet journalist. The “Iron Lady” was born Margaret Hilda Roberts, the daughter of a grocer. She studied chemistry at Oxford University and worked for a while as a research chemist.

35. Question pundits discuss after a presidential debate : WHO WON?

The Cure is an English rock band founded in 1976 and still going strong today, although not with the original line up. The only top ten hit the Cure had in the US is “Love Song”, released in 1989.

It was Tom Cruise’s idea to adapt the “Mission Impossible” television series for the big screen, and it became the first project for Cruise’s own production company. Tom Cruise took on the starring role of Ethan Hunt, the point man for the Impossible Missions Force (IMF).