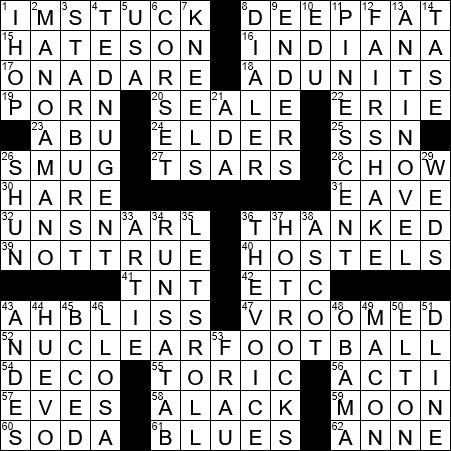 Indiana adopted “Crossroads of America” as the state’s official motto in 1937. The same phrase also applies unofficially to Indianapolis, a reference to the state capital’s location at the junction of four interstates in the center of Indiana.

31. Projected expense for a roofer? : EAVE

The eaves are the overhanging edges of a roof that project beyond the supporting wall. The term “eaves” evolved from the Old English “efes” meaning “edge.

When the US president is away from a fixed command center, there is always a military aide in close proximity who is carrying a mobile hub that can be used to launch a nuclear attack. That hub is carried in a black suitcase, and is nicknamed “the nuclear football”. The nickname is reputed to derive from an early attack plan that had the codename “Dropkick”. The use of the football began during the Eisenhower administration.

The archaic interjection “alack!” is an exclamation of sorrow or dismay. It is an abbreviated form of “ah, lack”, with “lack” used in the sense of loss, failure or shame.

Ted Nugent was the lead guitarist with the Amboy Dukes, and is now a successful solo artist. Off the stage, Nugent is noted for his conservative views, particularly when it comes to the Second Amendment. He serves on the board of directors of the National Rifle Association.

Orson Scott Card is a science fiction author (mainly). Card’s most famous work is his novel “Ender’s Game” first published in 1985. “Ender’s Game” was adapted into a movie and released in 2013, with a cast that includes Harrison Ford.

An antinovel is experimental work of fiction that was popularized by French philosopher Jean-Paul Sartre as an “anti-roman” (the French translation of the term). I’ve never read an antinovel, and it sounds like I would not appreciate the genre at all. It is characterized by a lack of plot, presentation of characters outside of chronological order, and experimental use of vocabulary.

36. Reality show whose contestants must be good with numbers : THE VOICE

“The Voice” is yet another reality television show. It is a singing competition in which the judges hear the contestants without seeing them in the first round. The judges then take on chosen contestants as coaches for the remaining rounds. “The Voice” is a highly successful worldwide franchise that originated in the Netherlands as “The Voice of Holland”.

In Spanish, one needs at least one “huevo” (egg) to make an omelet.

Mercer University is a private school with a main campus in Macon, Georgia. Mercer was founded in Penfield, Georgia as a boys’ preparatory school called Mercer Institute, in 1833. The school was named in honor of Jesse Mercer, a Baptist leader who provided the initial funding.