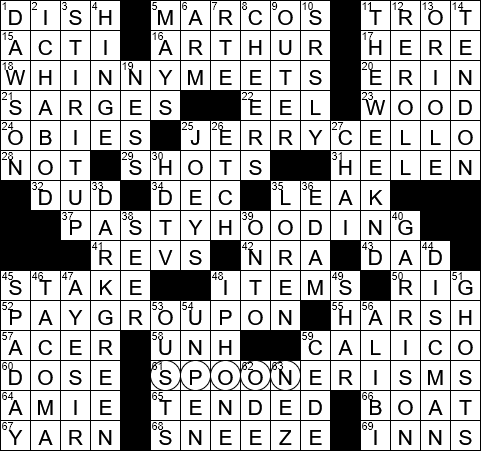 Themed clues are spoonerisms, in more ways than one. Each answer is a spoonerism of something eaten with a spoon:

Ferdinand Marcos served as President of the Philippines from 1965 until 1986, when he was forced to flee the country in the face of a popular revolt. Marcos, and his infamous wife Imelda, were known for their excesses and corruption. Ferdinand Marcos died in exile in Honolulu in 1989.

“First Knight” is a not-so-great 1995 film based on the legend of King Arthur. There is a great cast, including Sean Connery as Arthur, Julia Ormond as Guinevere and Richard Gere as Lancelot.

“King Arthur” is a 2004 movie that is based on the legend of the British king. The twist is that the title character in the film is portrayed as a Roman officer rather than a British medieval knight. Clive Owen plays Arthur, and Keira Knightley plays Guinevere.

Frosted Mini-Wheats is a breakfast cereal made by Kellogg’s. It consists of pieces of shredded wheat cereal that are frosted with sugar. Another major ingredient is gelatin (made from animal bones and fat), so vegans beware …

Erin Moran was the lovely actress most famous for playing Joanie Cunningham on “Happy Days” and the resulting (short-lived) spin-off sitcom called “Joanie Loves Chachi”. Long before she got her big break in “Happy Days”, Moran played Jenny Jones on the children’s drama “Daktari” from the late sixties.

December is the twelfth month in our calendar but was the tenth month in the old Roman calendar, hence the name (“decem” is Latin for “ten”). Back then there were only ten months in the year. “Ianuarius” (January) and “Februarius” (February) were then added as the eleventh and twelfth months of the year. Soon after, the year was reset and January and February became the first and second months.

“Hasty pudding” is a traditional British dish made of wheat flour cooked in boiling milk or water. Over in the US, there are variants of hasty pudding that are based on wheat, oat and corn.

52. Pony up for a certain online deal? : PAY GROUPON (a spoonerism of “Grey Poupon”)

Groupon is a deal-of-the-day website that was started in 2008. The concept behind the business is illustrated by the company name, a portmanteau of “group coupon”. Each day a discount coupon is offered to website members who sign up knowing that the coupon requires a minimum number of “takers” in order for it to be valid. If too few buyers sign up, then the coupon is void. When sufficient buyers sign up the coupon is honored, and the retailer benefits from the large volume of business generated. Groupon was very successful for a couple of years and predictions were made that the company would reach $1 billion in sales faster than any other company in history. That forecast changed dramatically, and the CEO was ousted in February 2013.

The University of New Hampshire (UNH) is the largest university in the state. It was founded as the New Hampshire College of Agriculture and the Mechanic Arts in 1866. The school’s athletic teams are known as the Wildcats.

A hostler (also “ostler”) is a groom usually employed at an inn to tend to horses. The spelling “Hostler” is used in American English, while “ostler” is used in British English. The term derives from the Latin “hostilarius”, the word for a monk who entertains guests at a monastery.

The Klondike is a region in Canada’s Yukon territory that is perhaps most famous for the Klondike Gold Rush in the late 1890s. About 100,000 prospectors migrated to the area, with many coming from Seattle and San Francisco. While a few prospectors did make their fortunes, the vast majority of prospectors endured the long trak and harsh conditions in vain.

Ichabod Crane is the protagonist in Washington Irving’s short story, “The Legend of Sleepy Hollow”. It’s thought that Irving “stole” the moniker from someone he actually knew, a captain in the army named Ichabod B. Crane.

13. Cousin of a meadowlark : ORIOLE

33. What Tropical Rain Forest is, in a Crayola box : DARK GREEN

Tacoma is a city on Puget Sound in the state of Washington. The city took its name from Mount Rainier that is nearby, as the peak used to be known as Mount Tahoma.