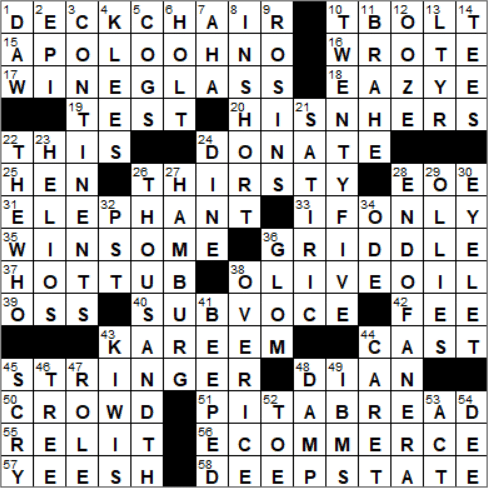 “Eazy-E” was the stage name of rapper Eric Lynn Wright. Eazy-E had a pretty liberal lifestyle, fathering seven children with six different women. In 1995, he died due to complications from AIDS. He was only 32 years old.

31. Animal with the longest gestation, at nearly two years : ELEPHANT

The gestation period for elephants is around two years, with only one calf being born at a time, and rarely two. The newborn calf weighs about 260 pounds. Female elephants become secually mature at about nine years of age, whereas males mature at 14-15 years. Typically, elephants live to 60 or 70 years old, with at least captive male reported to have lived for 86 years.

Virgin olive oil is oil produced from olives with no chemical treatment involved in the production process at all. To be labelled “virgin”, the oil must have an acidity level of less than 2% and must be be judged to have “a good taste”. Extra-virgin olive oil (EVOO) comes from virgin oil production, and is the portion with acidity levels of less than 0.8% acidity that is judged to have “superior taste”.

I tried hard to enjoy the 2009 movie “Inglourious Basterds”, but I find the violence in a Quentin Tarantino film so very hard to take. However, it got good reviews, so maybe you shouldn’t let me put you off.

Dian Fossey carried out her famous study of gorilla populations in the mountain forests of Rwanda. Sadly, Fossey was found dead in her cabin in Rwanda in 1986, murdered in her bedroom, her skull split open by a machete. The crime was never solved.

51. Pocket of the Mideast : PITA BREAD

3. Topic of the mnemonic “Eat An Apple As A Nighttime Snack” : CONTINENTS

The mnemonic “Eat an apple as a nighttime snack” helps us remember the seven continents:

4. Paintings such as “Cat and Bird” and “The Goldfish” : KLEES

The artist Paul Klee was born in Switzerland, but studied art in Munich in Germany. You can see many of Klee’s works in the San Francisco Museum of Modern Art. If you get to Bern in Switzerland, even more of them can be seen at the Zentrum Paul Klee that was opened in 2005. Klee’s most celebrated work is his pointillist painting from 1932 called “Ad Parnassum”, which is owned by the Kunstmuseum, also located in Bern.

22. 100+ million-selling band that once held a Guinness record for loudest concert : THE WHO

Helios was the god of the Sun in Greek mythology. He was the brother of Selene, the goddess of the moon, and Eos, the goddess of the dawn. Helios drove his chariot of the sun across the sky during the day, returning to the East at night be travelling through the ocean. The Roman equivalent to Helios was Sol.

27. German city on the Elbe : HAMBURG

Tech giant IBM was founded as the Tabulating Machine Company in 1896. The company changed its name to the Computing Tabulating Recording Corporation (CTR) in 1911 and was listed on the New York Stock Exchange in 1916. The name of International Business Machines (IBM) was given first to the company’s Canadian subsidiary, and then its South American subsidiary. In 1924, it was decided to adopt the International Business Machines name for the whole company. Good choice …

Deandra “Sweet Dee” Reynolds is a character played by Kaitlin Olson on the sitcom “It’s Always Sunny in Philadelphia”.