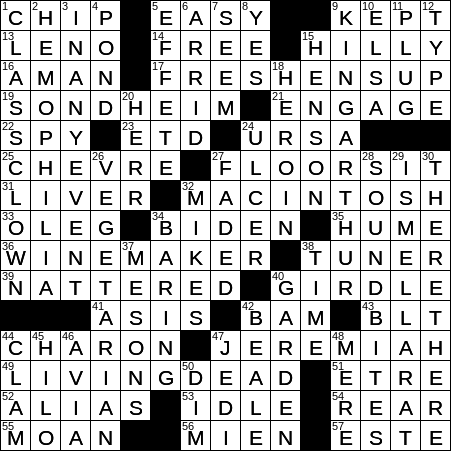 19. Pulitzer winner for “Sunday in the Park With George” : SONDHEIM

Stephen Sondheim has won more Tony Awards than any other composer, a total of eight. He has a long list of stage (and big screen) successes including “A Funny Thing Happened on the Way to the Forum”, “A Little Night Music”, “Sweeney Todd” and “Into the Woods”. Sondheim is big fan of crosswords and had a whole series of cryptic crosswords published in “New York” magazine in the sixties.

25. Cheese made from goat’s milk : CHEVRE

Chèvre is a goat cheese. It takes its name from “chèvre”, the French word for “goat”.

34. 2017 recipient of the Presidential Medal of Freedom : BIDEN

The dwarf planet Pluto has five moons, that we know of. The first of these, Charon, was discovered as recently as 1978. The five moons are named Charon, Styx, Nix, Kerberos and Hydra.

I’m guessing that the notorious Wild West outlaw Billy the Kid was of Irish stock as his family name was McCarty. Another indication of an Irish connection is that he also used the aliases William Antrim, Henry Antrim and Kid Antrim, as Antrim is one of the six counties of Northern Ireland.

9. Character in “Camelot” and “Monty Python and the Holy Grail” : KING ARTHUR

eHarmony is a high-profile online dating service based in Pasadena, California.

Jim Henson was a puppeteer, and most famously the creator the Muppets characters. Henson produced his first puppets for a local television station in Hyattsville, Maryland while he was still in high school. As well as the famous Muppet characters, Henson created, operated and voiced the character Yoda in most of the “Star Wars” movies. Henson died from a streptococcal infection in 1990, on the same day that Sammy Davis, Jr. passed away.

The man “inside” Big Bird on “Sesame Street” is Caroll Spinney, who has been playing the character since 1969. That’s a long time, so Matt Vogel has been Spinney’s understudy since 1998.

The commercialization of the drug heroin was led by the Bayer pharmaceutical company in Germany. The drug had been re-discovered in Bayer’s labs, and was named by the company’s head of research “heroin” from the German “heroisch” meaning “heroic, strong”. This was a reference to the perceived “heroic” effects on the user. Bayer lost the trademark rights to heroin (along with their “aspirin”) as part of WWI reparations.

45. It has views of Mauna Loa and Mauna Kea : HILO

Hilo is the largest settlement on the big island of Hawaii, with a population of over 43,000 (that’s not very many!). I love the Big Island …

ASICS is a Japanese company that produces athletic gear, including running shoes. The name comes from the Latin phrase “anima sana in corpore sano” which translates to “a healthy soul in a healthy body”.