Constructed by: Daniel Nierenberg
Edited by: Will Shortz 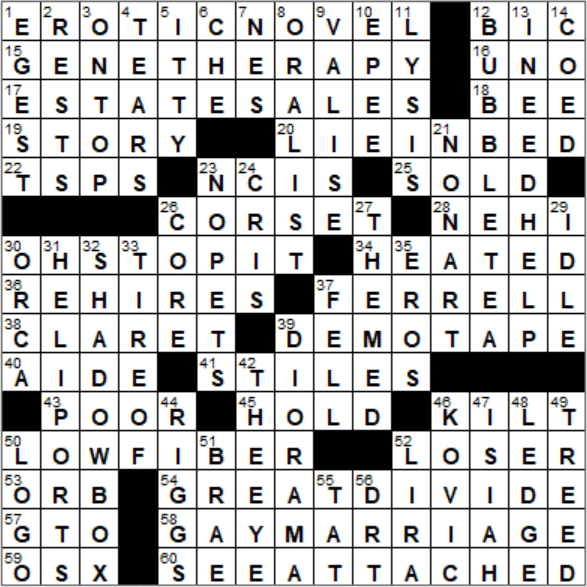 Wite-Out is a brand of correction fluid made by Bic.

The legal drama “JAG” is named for the highest ranking uniformed lawyer in the US Navy, the Judge Advocate General. Apparently the show was created as a cross between “Top Gun” and “A Few Good Men”.

Nehi Corporation was the nickname for the Chero-Cola/Union Bottle Works that introduced the Nehi drink in 1924. Years later the company developed a new brand, Royal Crown Cola (also known as RC Cola). By 1955, RC Cola was the company’s flagship product, so the “Nehi Corporation” became the “Royal Crown Company”. In 1954, RC Cola became the first company to sell soft drinks in cans.

“Zoolander” is a 2001 movie starring Ben Stiller, with Ben’s father, Jerry Stiller in a supporting role. Derek Zoolander is a male model, with the name coming from a melding of two real-life make models, Mark Vanderloo and Johnny Zander.

Apple introduced the OS X Operating System in 2000. Each version of this operating system has had a code name, and that code name until recently has been a type of big cat. The versions and code names are:

“Valise” is a French word for “suitcase”.

10. Competition whose opponents try to touch each other : EPEE

44. One of the detectives in “Lethal Weapon” : RIGGS

The “Lethal Weapon” series of film features Mel Gibson and Danny Glover in the lead roles as Sergeants Martin Riggs and Roger Murtaugh. All four films in the series were directed by Richard Donner.

“Born on the Fourth of July” is an autobiography by a paralyzed Vietnam War veteran who became an anti-war figure on return to the US. The author is Ron Kovic, who is played by Tom Cruise in a 1989 screen adaptation directed by Oliver Stone (for which Stone won an Academy Award). The book title is a play on the lyrics of the song “Yankee Doodle Dandy”.

The 2000 movie “Dr. T & the Women” is a pretty good film, starring Richard Gere in the title role. It’s a romantic comedy about a gynecologist, and the women in his private and public life. The list of actresses playing those women is impressive, and includes Helen Hunt, Farrah Fawcett, Laura Dern, Shelley Long, Kate Hudson and Liv Tyler.