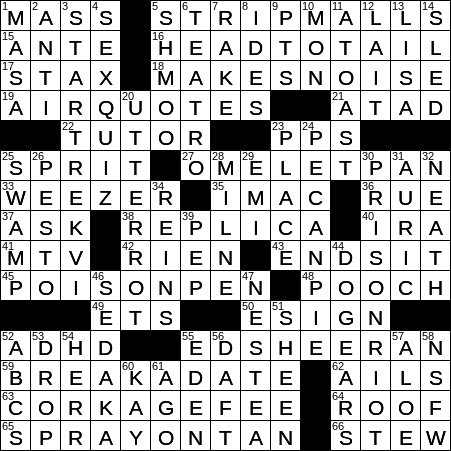 Air quotes are those gestures that some make with their fingers to emphasise sarcastically a particular word or phrase.

Apple introduced the OS X Operating System in 2000. Each version of this operating system has had a code name, and that code name until recently has been a type of big cat. The versions and code names are:

38. Monet that isn’t worth much money, say : REPLICA

Keogh plans are retirement plans used by self-employed individuals and small businesses. The plans are named for Democratic member of the US House Eugene James Keogh who sponsored the bill that introduced such plans.

Nantes is a beautiful city located on the delta of the Loire, Erdre and Sèvre rivers. It has the well deserved nickname of “The Venice of the West”. I had the privilege of visiting Nantes a couple of times on business, and I can attest that it really is a charming city …

The iconic science-fiction television show “Doctor Who” first aired in 1963 on the BBC, and relaunched in 2005. The relaunched series is produced in-house by the BBC in Cardiff in Wales, the location that is the setting of the successful “Doctor Who” spin-off called “Torchwood”. The new show is about the Cardiff branch of the Torchwood Institute which investigates incidents involving extraterrestrials. And, “Torchwood” is an anagram of “Doctor Who”.

52. What Adderall treats, for short : ADHD

Callaloo is a traditional Caribbean dish that has it roots in West African cuisine. The main ingredient of callaloo is a leafy vegetable, which can vary from region to region. Taro tends to be used in Trinidad, and amaranth elsewhere in the West Indies.

The Shmoo is a cartoon creature who first appeared in the Al Capp comic strip “Li’l Abner” in 1948. Apparently, shmoos are delicious to eat, and love to be eaten. They’ll even jump into the frying pan themselves!

La Scala Opera House opened in 1778. It was built on the site of the church of Santa Maria della Scala, which gave the theater its name: “Teatro alla Scala” in Italian.

In French, one might pour “lait” (milk) “dans votre café” (in your coffee).

14. Skeleton vehicle, in the Olympics : SLED

26. Sauce with the same consonants as what it’s used on : PESTO

“Pesto” is often added to “pasta”.

28. Children’s author who wrote “Did you ever stop to think, and forget to start again?” : MILNE

The slang word “stir”, meaning a prison, probably has its roots in Start Newgate prison in London, where it was a nickname for the establishment.

46. Singer/songwriter who composed the Captain & Tennille’s #1 hit “Love Will Keep Us Together” : SEDAKA

Neil Sedaka has been performing and composing for well over 50 years. His list of hits includes classics such as “Stupid Cupid”, “Oh! Carol”, “Happy Birthday Sweet Sixteen” and “Breaking Up Is Hard to Do”.

58. You might be careful opening something with this label : NSFW

According to Arthurian legend, Sir Kay was one of the first Knights of the Round Table. He was also King Arthur’s foster brother. Over time, Sir Kay came to be described as a boor and bully, having started out as valiant warrior.