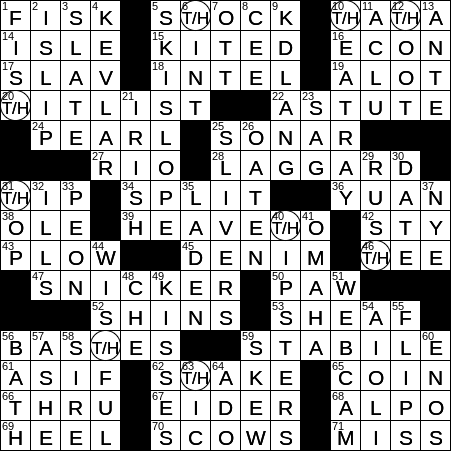 Constructed by: Xan Vongsathorn
Edited by: Will Shortz

Themed clues can take two answers, each differing by the exchange of a letter T for a letter H. We note that the letters T and H can represent TAILS and HEADS on a COIN that might be FLIPPED:

Carlton “Pudge” Fisk is a retired professional baseball player. Fisk played for both the Boston Red Sox and the Chicago White Sox.

20. Many people may be eliminated by one : HIT LIST (or TITLIST)

A titlist is one holding a title, a champion.

27. What Christ the Redeemer overlooks, for short : RIO

The iconic statue of Jesus overlooking the city of Rio de Janeiro in Brazil is known as “Cristo Redentor” (Christ the Redeemer). The statue was constructed between 1922 and 1931. It is the largest Art Deco statue in the world, as it stands at over 30 feet tall.

“Heave-ho” is a nautical term that was used as a chant when sailors were hoisting a sail, for example. The term has come to mean “dismissal”, as in “give him the old heave-ho”.

The nautical command “heave to” is an instruction to bring a vessel to a halt. The command especially applies to the maneuvering of a sailing vessel into the wind and trimming the sails so that they act against each other, hence keeping the head of the boat pointed into the wind.

Alexander Calder was an American sculptor and artist. Calder is famous for having invented the mobile sculpture, a work made up of several pieces hanging on a string in equilibrium. In effect they are what we might known as “mobiles”, operating on the same principle as mobiles that sit over cribs in a nursery. Calder refers to his large, stationary sculptures as “stabiles”.

Eiders are large sea ducks. Their down feathers are used to fill pillows and quilts, giving the name to the quilt called an “eiderdown”.

The town of Islip on the south shore of Long Island is home to Islip Airport. Now known as Long Island MacArthur Airport, it is used by many as a viable alternative to JFK and LaGuardia.

Moguls are the series of bumps in the surface of snow that arise naturally as a succession of skiers make turns on a slope.

The Quaker Oats Company was founded in 1901 when four oat mills merged, including the Quaker Mill Company of Ravenna, Ohio. Quaker Mill’s owner Henry Parsons Crowell played the key role in creating the new company and remained at the helm until 1943.

The word “hip” meaning “informed” is just a variant of the word “hep”, which has the same meaning. Both terms probably originated as slang first used in the African American community.

Omaha is the largest city in the state of Nebraska. It is located on the Missouri River, about 10 miles north of the mouth of the Platte River When Nebraska was still a territory Omaha was its capital, but when Nebraska achieved statehood the capital was moved to the city of Lincoln.

“Wistful” is a lovely word, I think, one that can mean “pensively sad, melancholy”.

“Guerrillero Heroico” is the name of an iconic photograph taken Alberto Korda of the revolutionary Che Guevara. With the title translating into English as “Heroic Guerrilla Fighter”, the image shows Guevara in a dark beret, with an “implacable” stare. It is versions of this photo that have been used so many time in tattoos, poster, paintings, etc. The Victoria and Albert Museum in London has determined that “Guerrillero Heroico” has been reproduced more than any other image in the history of photography.