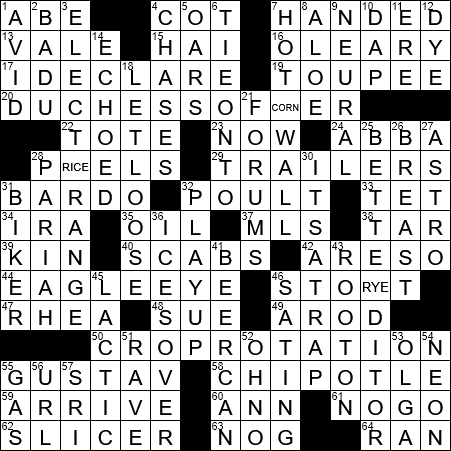 The four presidents whose faces are carved in the granite face of Mount Rushmore are (from left to right) George Washington, Thomas Jefferson, Theodore Roosevelt and Abraham Lincoln. Each of the presidents is about 60 feet in height, although they might have been larger. The original intent was for the presidents to be depicted from head to waist, but the project lost funding.

“O hai” is an intentionally misspelled “Oh hi”. For some reason, “O hai” is often used as a title for pictures of cute animals.

Kevin O’Leary is a businessman and investor from Montreal who is one of the “sharks” on the American reality show “Shark Tank”, and one of the “dragons” on the Canadian show “Dragon’s Den”.

“Shark Tank” is a reality television show that features aspiring entrepreneurs making pitches to potential investors (the “sharks”) as they try to grow their businesses. The show is a Mark Burnett production and is based in a British series called “Dragons’ Den”.

Camilla Parker Bowles became the Duchess of Cornwall when she married Charles, Prince of Wales in 2005. The Duchess of Cornwall title derives from Duke of Cornwall, one of Charles secondary designations. The use of the primary title Princess of Wales wasn’t considered a good idea as it was was closely associated with Lady Diana Spencer, Charles’ first wife.

“Abba” is a word meaning “father” in Hebrew.

A poult is a young fowl, like a turkey, chicken or pheasant

37. Org. for the Philadelphia Union and D.C. United : MLS

40. Ones whose work is strikingly controversial? : SCABS

Professional baseball player Alex Rodriguez earned more nicknames than just A-Rod. He has been called “the Cooler” by some players as there was a perception that teams went cold when he joined them and hot when he left. He has also been called “A-Fraud” by teammates because of another perception, that he is over-demanding. Rodriguez was in a world of hurt not so long ago, for using illegal performance-enhancing drugs. He retired from the baseball in 2016.

50. Common farming technique … or a hint to solving this puzzle : CROP ROTATION

Farmers use the technique of crop rotation in order to avoid one crop depleting the same set of nutrients from the soil in one particular field. In addition to rotating crops, farmers will usually let a field lie fallow for one season, i.e. leave it unplanted in order to give the soil time to recover.

I’m still trying to keep an open mind when it comes to the music of Gustav Mahler, but I find it hard to appreciate. Mahler was an Austrian composer, active in the late-Romantic period. During his own lifetime he was most notable as a conductor, and his compositions gained in popularity only after his death in 1911. Mahler’s music was banned as “degenerate” during the Nazi Era, as Mahler was Jewish.

58. Chain with a pepper in its logo : CHIPOTLE

It’s not really clear where the term “nog” (as in “egg nog”) comes from although it might derive from the word “noggin”, which was originally a small wooden cup that was long associated with alcoholic drinks.

Erykah Badu is the stage name of Erica Wright, an American “neo-soul” singer. Badu gained some notoriety in March of 2010 when she shot a scene for a music video in Dallas. In the scene, she walks to the spot where President Kennedy was assassinated, removing her clothes until she is nude, and then falls to the ground as if she has been shot in the head. For that stunt she was charged with disorderly conduct.

“Electrophorus electricus” is the biological name for the electric eel. Despite its name, the electric “eel” isn’t an eel at all, but rather what is called a knifefish, a fish with an elongated body that is related to the catfish. The electric eel has three pairs of organs along its abdomen, each capable of generating an electric discharge. The shock can go as high as 500 volts with 1 ampere of current (that’s 500 watts), and that could perhaps kill a human.

It used to be that “neural network” was just the name given to a network nerve cells in an organism. In the modern world, the term “neural net” (short for “neural network”) also applies to virtual or electronic devices designed to mimic the function of the human brain, and in particular learning from past experiences.

10. Alternative greeting to a high-five : DAP

The dap is a form of handshake, nowadays often a complicated and showy routine of fist bumps, slaps and shakes. Some say that “dap” is an acronym standing for “Dignity And Pride”.

The celebratory gesture that we call a “high five” is said to have been invented by former baseball players Dusty Baker and Glenn Burke when they were both playing for the Los Angeles Dodgers in the later 1970s.

The Latin “forum” (plural “fora”) translates as “marketplace, town square”. “The Roman Forum” is the most famous example of such a space. The Forum is at the heart of the city of Rome is surrounded by the ruins of several ancient government buildings, and has been referred to as the most celebrated meeting place in the world.

As you might imagine, I’ve never been to a rave, and don’t have one upcoming in my diary. And as raves often start at 2 a.m. then I’m unlikely ever to experience one. A rave is generally an all-night party featuring loud, electronically-synthesized music usually played by a DJ as opposed to a live band.