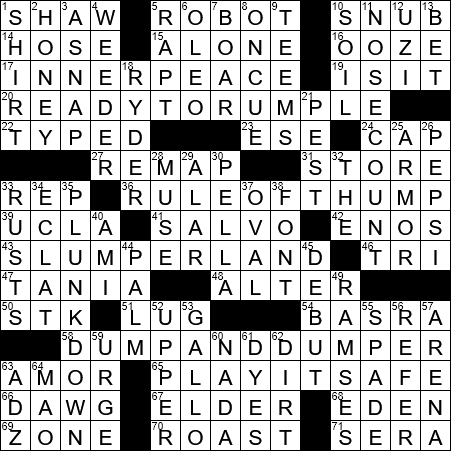 Themed answers are common phrases in which a letter B has been switched to a letter P:

17. Topic for one of the Dalai Lama’s “Little Book” series : INNER PEACE

Tania Mallet is an actress and model from England who is best known for playing Bond Girl Tilly Masterson in the 1964 film “Goldfinger”. Mallet is a cousin of actress Helen Mirren.

58. Title of a trash collector’s memoir? : DUMP AND DUMPER (from “Dumb and Dumber”)

“Hi and Lois” is a comic strip that first appeared in 1954 and is still running today. The strip was created by Mort Walker (also known for “Beetle Bailey”) and was originally illustrated by Dik Browne (also known for “Hägar the Horrible”). The title characters Hi and Lois Flagstone first appeared in “Beetle Bailey”. Lois is Beetle’s sister, and the characters occasionally show up in each other’s strip.

The Hawaiian party or feast known as a “luau” really dates back to 1819, when King Kamehameha II removed religious laws that governed the eating of meals. These laws called for women and men to eat separately. At the same times as he changed the laws, the king initiated the luau tradition by symbolically eating with the women who moved in his circle.

Imperial is a brand of margarine from Unilever. Famously, the marketing folks ran TV ads in which anyone eating Imperial margarine had a crown appear on his or her head out of thin air.

The Hollywood actress Winona Ryder’s real name is Winona Horowitz. Ryder was born near the town of Winona in Minnesota, from which she got her name. Her success on the screen has garnered as much media attention as her life off the screen. The papers had a field day when she was arrested in 2001 on a shoplifting charge followed by a very public court appearance. Her engagement with Johnny Depp in the early nineties was another media frenzy. Depp had “Winona Forever” tattooed on his arm, which he had changed after the breakup to “Wino Forever”. A man with a sense of humor …

Tilting is the most recognized form of jousting. Jousting can involve the use of a number of different weapons, but when lances are used the competition is called “tilting”. Jousting took place in a roped-off enclosure that was called the lists, or list field. In later medieval times, some castles and palaces had purpose-built “tiltyards” that were used for jousting. Do you remember where the Beach Volleyball events were held in the 2012 London Olympics? Well that was Horse Guards Parade, the former tiltyard for the Palace of Whitehall that was used in the time of King Henry VIII.

Pella is a manufacturer of windows and doors headquartered in Pella, Iowa, whence the company name.

The Aswan Dam on the River Nile is actually two dams. The Low Dam was first built in 1902 (and modified later). The High Dam was completed in 1970.

E & J Gallo Winery was founded by Ernest and Julio Gallo in Modesto, California in 1933. Gallo is the largest exporter of wine from the State of California.

Genuine batik cloth is produced by applying wax to the parts of the cloth that are not to be dyed. After the cloth has been dyed, it is dried and then dipped in solvent that dissolves the wax.

During China’s Cultural Revolution, the Communist Party published a book of statements and writings from Chairman Mao Zedong. Here in the West the publication was usually referred to as “The Little Red Book”.