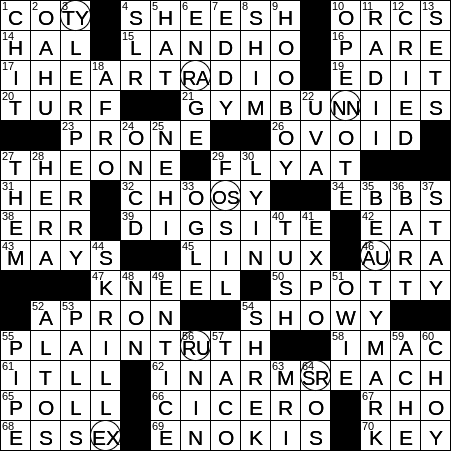 Today’s rebus squares each contain two letters. Those two-letter rebus squares are like FOSSILS embedded in the grid, and when assembled spell out TYRANNOSAURUS REX:

The cry of “land ho!” from a sailor means that land has just been spotted. A similar shout is “sail ho!”, indicating that another boat has been spotted.

The Linux operating system uses as its mascot a penguin named “Tux”.

Tyler Perry is an actor, comedian and writer who is perhaps best known in front of the camera for his drag performances as tough elderly woman “Madea”. Perry also created the sitcom “Tyler Perry’s House of Payne” that ran for eight seasons from 2006 until 2012.

“Radius” (plural “radii”) is a Latin word, as one might expect, meaning “spoke of a wheel”. Makes sense, huh …?

The Nehi cola brand has a name that sounds like “knee-high”, a measure of a small stature. Back in the mid-1900’s the Chero-Cola company, which owned the brand, went for a slightly different twist on “knee-high” in advertising. The logo for Nehi was an image of a seated woman’s stockinged legs, with her skirt pulled up to her knees, to hint at “knee-high”.

29. What each circled square in this puzzle represents : FOSSIL

“Tush”, a word for the backside, is an abbreviation of “tochus” that comes from the Yiddish “tokhes”.

“Skrillex” is a the stage name of Sonny Moore, a producer of electronic dance music. Not something that or someone who I know anything about …

55. Appurtenance for a snowman : PIPE