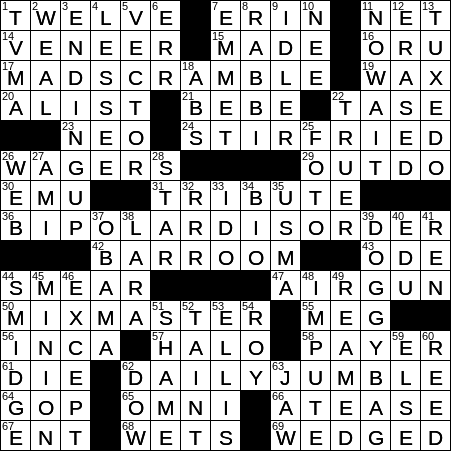 Today’s Theme (according to Bill): Relocate a NASA Mgr.

Themed answers are common phrases, but are reinterpreted as defining anagrams. Those anagrams are used as today’s themed clues:

Bebe Neuwirth is a wonderful actress and dancer who famously played Dr. Lilith Sternin, the wife of Dr. Frasier Crane on “Cheers” and “Frasier”. Neuwirth is a fabulous dancer, having studied ballet at Juilliard. In more recent years she has had starring roles on Broadway, and in 2010 played opposite Nathan Lane in “The Addams Family”. Neuwirth also played a leading role on the show “Madam Secretary”.

30. Bird that can hardly get off the ground : EMU

Encomium is a formal expression of praise, and comes into English via Latin from Greek. “Encomium” is derived from the Greek “komos” meaning “banquet, procession”.

Meg Ryan is the stage name of the actress Margaret Mary Hyra. Ryan’s big break came with the excellent 1989 movie “When Harry Met Sally”, from which she went on to star in some of the greatest romantic comedies ever made.

62. LYDIA : DAILY JUMBLE (LYDIA is an anagram of DAILY)

“Weal” is “prosperity, happiness”, and has the same roots as the word “wealth”.

8. One of three people walking into a bar, in a joke : RABBI

“I Do, I Do, I Do, I Do, I Do” was the second of ABBA’s long, long string of smash hits. It was particularly successful in Australia, where there is a huge ABBA fan base to this day. The song was featured in a really great Australian film called “Muriel’s Wedding” from 1994. This was the movie that launched the career of the wonderful actress Toni Collette.

A minion is a servile follower, a yes-man. The term “minion” comes from the French word “mignon” meaning “favorite, darling”.