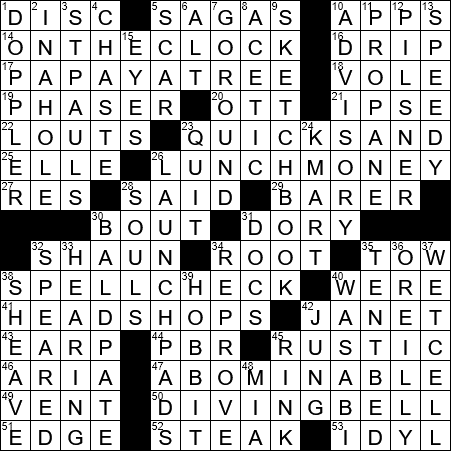 Vole populations can increase very rapidly. Mama vole is pregnant for just three weeks before giving birth to litters of 5-10 baby voles. Then the young voles become sexually mature in just one month! If you have one pregnant vole in your yard, within a year you could have over a hundred of the little critters.

“Ipse dixit” is Latin, a phrase meaning “he himself said it”. The term is used in contemporary English to describe an unsupported assertion, usually by someone in authority.

Fall Out Boy is a rock band from Chicago that formed in 2001. And then, I lost interest …

Paraphernalia used in the consumption of cannabis and tobacco are sold in retail outlets known as head shops.

The Rocky Horror Picture Show has to have the most devout cult-following of any movie ever made. Famously, fans attending a midnight show of the film will dress up in the outrageous costumes used in the film, and bring props with them. The props bear little relation to the storyline, but a tradition of using certain props in a particular way has been established. For example, at one point a character proposes a toast, and the audience throws toast around the theater. Go figure …

46. Hotel/casino on the Vegas Strip : ARIA

An “idyll” (also “idyl”) is a short poem with a pastoral theme, usually depicting the scene in romantic and idealized terms. The word comes from the Greek “eidyllion”, which literally translates to “little picture” but was a word describing a short, poem with a rustic theme.

The Doppler effect is the change in frequency of a sound experienced by an observer when the source of the sound is moving nearer or further away. The effect was proposed by Austrian physicist Christian Doppler in 1842.

Admiral Horatio Nelson is noted for his victory at the Battle of Trafalgar. The battle was a decisive win for the British during the Napoleonic Wars, fought against the combined fleets of France and Spain. Nelson was fatally wounded by a marksman from one of the French ships, but as he was conscious he continued to monitor the battle, dying three hours after he was shot. Nelson was much revered by his crew who felt that his body had to be returned to England. The body was placed in a barrel full of brandy and the barrel lashed to the mainmast of the Victory and placed under guard. The damaged flagship was towed to Gibraltar where the body was transferred to a lead-lined coffin and the brandy replaced by aqua vitae (spirits of wine). While the body continued its journey home, dispatches reporting the outcome of the battle were carried to England on a ship called … HMS Pickle. A boozy end to a distinguished life …

Propane is a gas with the formula C3H8. It is an abundant byproduct of the refining of petroleum and is used as a fuel. The gas liquefies readily under pressure, and is usually transported in pressurized containers. However, the containers of “propane” that we purchase in stores is actually a mixture of propane and butane, usually in the ratio of about 50:50.

Pilsener (also “pilsner” or “pils”) is a pale lager. The name “pilsener” comes from the city of Pilsen, now in the Czech Republic. It was in Pilsen, in 1842, that the first bottom-fermented lager was produced. A bottom-fermented beer is much clearer that a top-fermented beer, and has a crisper taste. The “top” and “bottom” refers to where the yeast gathers during the brewing process.

Kmart is the third largest discount store chain in the world, behind Wal-Mart and Target. The company was founded by S. S. Kresge in 1899, with the first outlets known as S. S. Kresge stores. The first “Kmart” stores opened in 1962, with the “K” standing for “Kresge”. Kmart is famous for its promotions known as “blue light specials”, a program first introduced in 1965 and discontinued in 1991. I remember being in a Kmart store soon after coming to live in the US. That evening an employee installed a light stand an aisle away from me, switched on a flashing blue light and there was some unintelligible announcement over the loudspeaker system. I had no idea what was going on …

Bill O’Reilly is best known as the former host of “The O’Reilly Factor” on the Fox News Channel. O’Reilly’s positions are very much on the right side of the political spectrum, with at least one notable exception: his opposition to the death penalty. He suggests that convicted murderers should be locked up without the possibility of parole, in a military prison with forced labor for eight hours a day.

Comedian Jon Stewart is best known for hosting “The Daily Show” from 1999 until 2015. Stewart is a fan of crosswords. He proposed to his girlfriend and future wife in a personalized crossword that was created with the help of crossword editor Will Shortz.