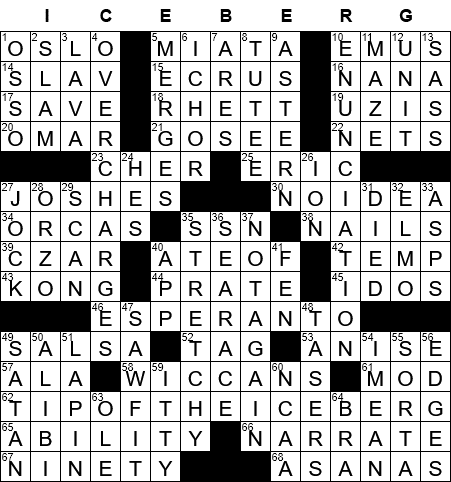 1. City where you can view Edvard Munch’s “The Scream” : OSLO

The Don is a major river in Russia that runs over 1200 miles through the country, and emptying into the Sea of Azov.

The Siege of Jerusalem took place in the year 637. The Rashidun Army lay siege to Jerusalem, which was in the hands of the Byzantine Empire. In order for the city to surrender, the Caliph Omar had to travel himself to Jerusalem. As victor, Omar was invited to pray in the Christian Church of the Holy Sepulchre. Out of respect for the Christian edifice, Omar refused to go into the church and instead prayed outside in the courtyard. Just over 500 years later, the Mosque of Omar was built on the site where Omar prayed, right opposite the Church of the Holy Sepulchre.

“March Madness” is the name given to the NCAA Men’s Division 1 Basketball Championship (among others), that is held in spring each year.

“Cher” is the stage name used by Cherilyn Sarkisian. Formerly one half of husband-wife duo Sonny & Cher, she is often referred to as the Goddess of Pop. In her acting career, Cher was nominated for the Best Supporting Actress Oscar of 1984 for her performance in “Silkwood”. She went further in 1988 and won the Best Actress Oscar for playing Loretta Castorini in “Moonstruck”.

“Dr. Strangelove” is a black comedy directed and produced by Stanley Kubrick, released in 1964. The big star in the film is the great Peter Sellers, who plays three key roles. The full name of the movie is “Dr. Strangelove or: How I learned to Stop Worrying and Love the Bomb”.

To prate is to talk idly and at length, and is a word that comes to us from the Middle Dutch “praten”, meaning “to talk or chatter”.

Esperanto is an international language specially constructed to create some level of harmony between people from different parts of the world. It was created in the late 1800s by an opthamologist from modern-day Poland. Tens of thousands, and maybe even millions of people speak Esperanto, with some being taught it as a native language from birth.

49. It may involve dips, in two different senses : SALSA

Jelly beans are thought to have originated in Boston, and it is documented that they were sent from there by families and friends of soldiers fighting in the Civil War.

58. Ones reading the Book of Shadows : WICCANS

A “Book of Shadows” is a book used in the neopagan religion known as Wicca. The book contains religious texts as well as instructions for carrying out magic rituals. The first Book of Shadows was written in the late 1940s by English Wiccan Gerald Gardner.

61. Kind of operation in number theory, for short : MOD

62. Hidden trouble indicator … or what you’ll need to finish this crossword? : TIP OF THE ICEBERG

2. It’s symbolized by a star and crescent : ISLAM

Although the star and crescent emblem has been around for some centuries, it was only adopted as a symbol of Islam starting in the 1950s.

Ichor is a golden fluid that is the blood of the gods in Greek mythology.

8. Alexander the Great, to Aristotle : TUTEE

Here is a list of all the single-letter chemical symbols:

32. Muppet who refers to himself in the third person : ELMO