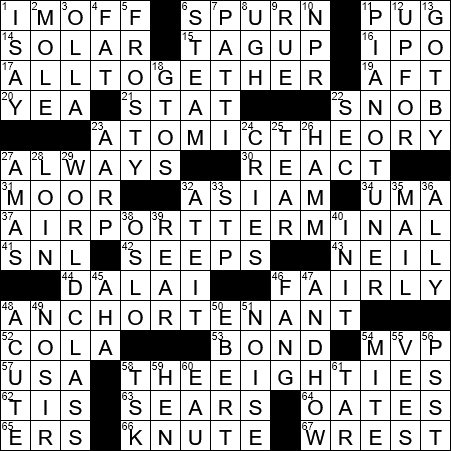 Themed answers each comprise two words beginning with the letters AT (sounds like “eighty”):

41. Show with many notable alums : SNL

Neil Simon was one of my favorite playwrights. Simon wrote over thirty plays and about thirty screenplays. He received more nominations for Oscars and Tony Awards than any other writer. My favorite play penned by Simon has to be “Brighton Beach Memoirs”, but the list of his great stage works seems endless and includes “Barefoot in the Park”, “The Odd Couple”, “Sweet Charity”, “Plaza Suite”, “California Suite”, “Biloxi Blues” and “The Goodbye Girl”.

53. Word spoken before and after “James” : BOND

My name is Butler, Bill Butler …

The USA Network cable television channel has been around since 1971. Back in 1971 it was called the Madison Square Garden Network, becoming USA in 1979.

What was originally called the “Magic Cube” became better known as Rubik’s Cube, named for its inventor Ernő Rubik. Rubik’s Cube is the world’s biggest selling puzzle game, with over 350 million sold in just over 30 years.

63. Department store that once famously put out catalogs : SEARS

Knute Rockne, America’s most famous football coach many say, was born in the city of Voss in Norway. He came to the United States with his family when he was 5-years-old. Years later he graduated Notre Dame with a degree in Chemistry, but abandoned that career path when he was offered his first real coaching job.

“Chap” is an informal term for “lad, fellow”, that is used especially in England. The term derives from “chapman”, an obsolete word meaning “purchaser” or “trader”.

“Frosty the Snowman” is a song that was recorded first by Gene Autry, in 1950. The song was specifically written in the hope that it would become a follow-up hit to Autry’s “Rudolph the Red-Nosed Reindeer” that topped the charts the previous year.

NPR’s flagship news program is “Morning Edition”, a 2-hour show broadcast from Monday through Friday. The sister show “Weekend Edition” is broadcast on Saturday and Sunday.

11. One involved with a grand opening? : PIANO TUNER

38. Capital due north of the northern tip of Denmark : OSLO

Back in the early 1900s a “keister” was a safe or a strongbox. It has been suggested that this term was then used as slang by pickpockets for the rear trouser pocket in which one might keep a wallet. From this usage, keister appeared as a slang term for the buttocks in the early 1930s.

Roger Ebert was a film critic for “The Chicago Sun-Times” for 50 years. He also co-hosted a succession of film review television programs for over 23 years, most famously with Gene Siskel until Siskel passed away in 1999. Siskel and Ebert famously gave their thumbs up or thumbs down to the movies they reviewed. Ebert was the first film critic to win the Pulitzer Prize for Criticism, which he did in 1975. He was diagnosed and treated for thyroid cancer in 2002, and finally succumbed to a recurrence of the disease in April 2013.

There is a pair of letters V (vees) in the middle of the word “skivvies”.

The word “skivvies” is used to describe underwear, usually a cotton t-shirt and shorts. Such usage of “skivvies” originated in the thirties as naval slang. “Skivvy” has also been used as a derogatory term since the early 1900s for a female domestic servant.