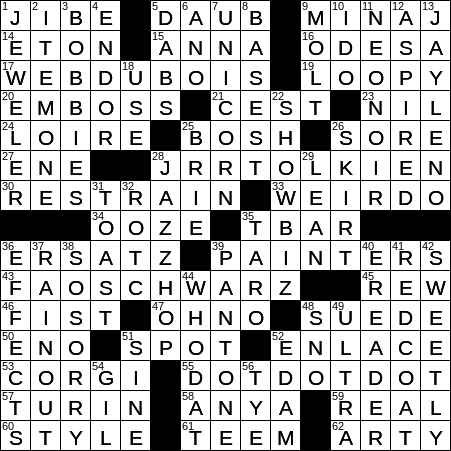 Themed answers are famous people who use three initials in their names, and hence three DOTS:

An Eton jacket is usually black in color, cut square at the hips and has wide lapels. It is named for the design of jacket that is worn by the younger students at Eton College just outside London.

FAO Schwarz was perhaps the most famous, and certainly the oldest, toy store in the United States. The FAO Schwarz outlet on Fifth Avenue in New York City closed in 2015. This store was famously used in several Hollywood movies. For example, it was home to the Walking Piano that Tom Hanks played in the movie “Big”.

The Welsh corgi is a herding dog that originated in Britain, with two recognized breeds: the Pembroke and Cardigan. Corgis aren’t speedy enough to do their job by running around livestock like collies, and instead nip at the heels.

Here is another example of a difference in terminology on either side of the Atlantic. What we call the Mohawk hairstyle in the US is known as a Mohican in the British Isles. The Mohawk hairstyle is named after the Mohawk nation, who wore their hair in the same fashion. The Mohawk style has been around for a long time elsewhere in the world. There was a well-preserved male body found in a bog near Dublin in Ireland in 2003. The body is about 2,000 years old, and has the Mohawk haircut.

Police officers in the UK are sometimes called “bobbies” (and used to be called “peelers”). The name refers back to Sir Robert Peel who, when Home Secretary, created the modern police force.

13. “The Tonight Show” host before and after Conan O’Brien : JAY LENO

“Skoal” is a Swedish and Norwegian toast that has roots in the old Norse word “skaal” meaning “cup”.

Amazon’s Kindle line of e-book readers was introduced in 2007. The name “kindle” was chosen to evoke images of “lighting a fire” through reading and intellectual stimulation. I bought myself a Kindle Fire HD a few years ago. I’ve started reading e-books for the first time in my life, as well as enjoying other computing options available with the tablet device …

Here in the US, we refer to the British soldiers fighting in the revolutionary war as “Redcoats”, a reference to the color of their uniforms. Nowadays in the British Army, the red tunic is reserved only for ceremonial purposes. The vivid color proved to be a detriment after the invention of the rifle.

The musical term “dolce” instructs the performer to play “gently and sweetly”.

The actor William Petersen is best known for portraying forensic scientist Gil Grissom on the “CSI: Crime Scene Investigation”. Petersen quit acting in the show after nine seasons, and moved into the role of executive producer.