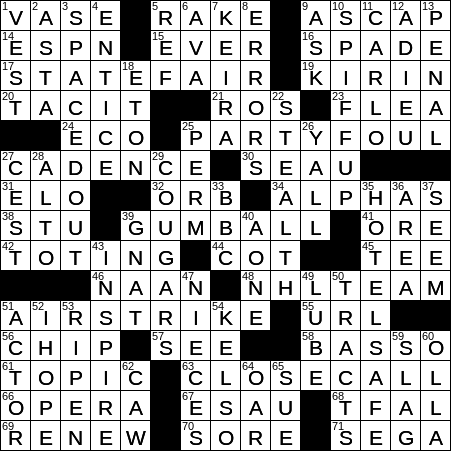 Themed answers end with CALLS made by an umpire in a baseball game. And, I guess those CALLS are sometime quite CLOSE?

“Bouquet” comes from the French word for “bunch”, in the sense of bunch of flowers. In French, the term is derived from an older word describing a little wood or small grove of trees.

A spatula is a tool or implement used for mixing, lifting or spreading. “Spatula” is the Latin name for the tool, and is a diminutive of the word “spatha” meaning “broad, flat blade”. “Spatha” ALSO gives rise to our related term “spade”.

Ros Asquith writes the “Teenage Worrier” books aimed at teens, as well as cartoons for “The Guardian” newspaper in the UK.

25. *Spilling a drink or eating all the guacamole, say : PARTY FOUL

Junior Seau was an NFL linebacker, first playing for the San Diego Chargers and then the Miami Dolphins and the New England Patriots. Sadly, Seau was found dead in his home in 2011, having committed suicide by shooting himself in the chest.

Stu Sutcliffe was one of the original four members of The Silver Beatles (as The Beatles were known in their early days), along with John Lennon, Paul McCartney and George Harrison. Sutcliffe apparently came up with name “Beatles” along with John Lennon, as a homage to their hero Buddy Holly who was backed by the “Crickets”. By all reports, Sutcliffe wasn’t a very talented musician and was more interested in painting. He went with the group to Hamburg, more than once, but he eventually left the Beatles and went back to art school, actually studying for a while at the Hamburg College of Art. In 1962 in Hamburg, Sutcliffe collapsed with blinding headaches. He died in the ambulance on the way to hospital, his death attributed to cerebral paralysis.

The Philadelphia Flyers hockey team was founded in 1967. The team’s name was chosen as using a “name-the-team” fan contest.

7. Knightley of “The Imitation Game” : KEIRA

A spiff is a well-dressed man.

BBC One is the British Broadcasting Corporation’s flagship TV channel. BBC One was launched just a few years back, as the BBC Television Service. That year was 1936, making it the world’s first regular, high-image resolution television service.