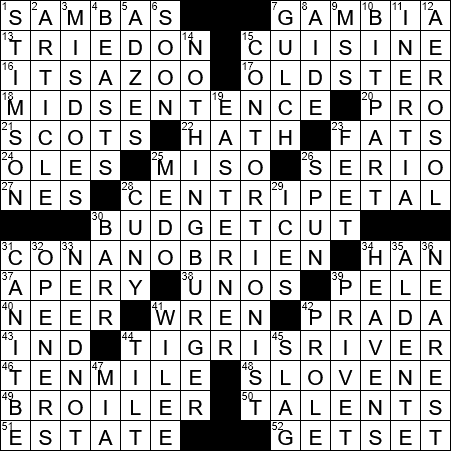 The Islamic Republic of the Gambia is a country in West Africa. It is the smallest country on the African mainland, and almost completely surrounded by Senegal. The Gambia lies on the Gambia River, for which the nation is named.

Something described as seriocomic has both serious and comical elements, but generally the comic side predominates.

34. Ethnic group that makes up about 18% of the world’s population : HAN

The Han Chinese people are the largest ethnic group in the world, and comprise 18% of the planet’s population. The 1.3 billion Han also make up 92% of China’s population. The group takes its name from the Han dynasty that ruled much of modern day China from roughly 200 BCE to 220 CE.

Lady Macbeth is an evil and treacherous woman in William Shakespeare’s “Macbeth”. The most famous line uttered by Lady Macbeth has to be “Out, damned spot! Out, I say!” In this line, Lady Macbeth is frantically rubbing at her hand trying to get rid of an imaginary bloodstain left there after she committed four murders.

Prada was started in 1913 as a leather-goods shop in Milan, by the two Prada brothers. One of the brothers, Mario Prada, prevented the female members of his family participating in the company as he didn’t believe women should be involved in business (!). When the sexist brother died, his son had no interest in the business so it was his daughter who took over and ran the company for about twenty years, handing it over to her own daughter. I’d say the devil loved that …

The Fertile Crescent is a large swath of land in the Near East that includes the Nile Valley in the west and the land around the Tigris and Euphrates in the east.

48. Neighbor of an Austrian : SLOVENE

The talent was a unit of currency (as well as a unit of mass). It was mentioned in the Bible in Jesus’ parable of the talents. In fact, this parable is the origin of our word “talent” that we now use to mean “gift, skill”.

Editors (eds.) might read or edit a manuscript (MS)

William Barr was the US Attorney General for two years in the administration of President George H. W. Bush. When not working, Barr is a very enthusiastic player of the Scottish bagpipes!

George Orwell introduced us to the proles, the working class folk in his famous novel “Nineteen Eighty-Four”. Collectively, the proles make up the section of society known as the proletariat.