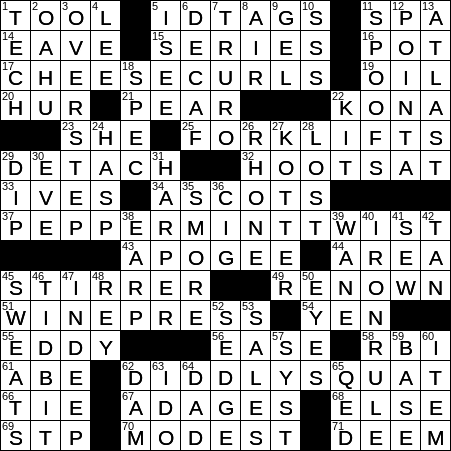 Today’s Theme (according to Bill): A Useless Exercise

Themed answers are common phrases that have been clued as though they are part of an EXERCISE REGIMEN:

43. Highest point in an orbit : APOGEE

2. Where Waikiki Beach is : OAHU

Truro is a town in the Outer Cape, close to the northern tip of Cape Cod in Massachusetts. The area was settled in the late 1600s by English colonists who named it for the city of Truro in Cornwall, England. Truro is home to the Highland Light (also called “the Cape Cod Light”), which was the first lighthouse to be built on Cape Cod. The first Highland Lighthouse was built in 1797, and the current structure was erected in 1857. The whole structure had to be moved a tenth of a mile inland in 1996, as it had become endangered by coastal erosion.

The word “spoof” came into the language in the 1880s with the meaning “hoax, deception”. The term was coined by British comedian Arthur Roberts, when it used it as the name for a card game he invented that involved trickery and nonsense. The verb “to spoof” came to mean “to satirize gently” starting in the 1920s.

The Rhône river rises in Switzerland and flows through the southeast of France.

“Welcome Back, Kotter” is a sitcom from the late seventies. The title character is a teacher at Buchanan High, one Gabe Kotter who himself had attended the school as a student. Kotter teachers a remedial class of students who call themselves the Sweathogs. In fact, Kotter had himself been a founder of the Sweathogs, when he was a student in the same class. Kotter was played by Gabe Kaplan. One of the prominent students in his class Vinnie Barbarino played by a young John Travolta, a role that launched his film career. In recent years you might have seen Gabe Kaplan as co-host of the popular show “High Stakes Poker” on GSN.

Nelle Harper Lee was an author from Monroeville, Alabama. For many years, Lee had only one published novel to her name, i.e. “To Kill a Mockingbird”. That contribution to the world of literature was enough to earn her the Presidential Medal of Freedom and a Pulitzer Prize. Harper Lee was a close friend of fellow author Truman Capote who was the inspiration for the character named “Dill” in her novel. Lee was all over the news in 2015 as she had published a second novel, titled “Go Set a Watchman”. The experts seem to be agreeing that “Go Set a Watchman” is actually a first draft of “To Kill a Mockingbird”. Lee passed away less than a year after “Go Set a Watchman” hit the stores.

Marlboro cigarettes were launched by Philip Morris in 1924 as a cigarette for women. To that end there was a red band around the filter designed to hide lipstick stains. In the fifties the brand was repositioned as a men’s cigarette, offering men a “manly” filtered cigarette as the world was becoming aware of the link between cigarettes and lung cancer. With the introduction of the Marlboro Man, the rugged cowboy riding across the west, sales rocketed from a 1% market share to become the 4th biggest seller in the country. The original Marlboro Man was model and actor named Darrell Winfield. He received loads of free cigarettes during his reign, I am sure. He died of lung cancer …

Totalitarianism differs somewhat from authoritarian regimes, at least by definition. In the latter, the ruling entity is concerned mainly with political power, and so a degree of freedom exists for the populace. Totalitarian regimes not only enforce political control, but also control of the economy, education, as well social and private life.

A “morsel” is a small bite, a mouthful of food. The term comes from the Latin “morsus” meaning “a bite”.