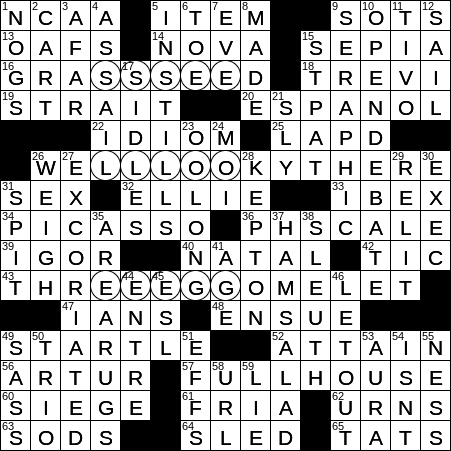 Themed answers each contain five circled, side-by-side letters. Those five letters each comprise two instances of one letter, and three of another letter. Such an arrangement is similar to a FULL HOUSE in poker:

1. Grp. from which many people are drafted : NCAA

9. Longtime members of the bar? : SOTS

The actress Ellie Kemper’s big break came with the role of Erin Hannon, a receptionist on the sitcom “The Office”. More recently, Kemper has been playing the title role on the Netflix comedy series “Unbreakable Kimmy Schmidt”.

“Guernica” is a painting by Pablo Picasso that he completed in 1937. Picasso painted it soon after the aerial bombing of the Basque town of Guernica during the Spanish Civil War. The attack was carried out by German warplanes sent by Adolf Hitler at the request of the Spanish Nationalist government. The town was regarded as a bastion of Republican resistance, although it had no military significance. As the town was largely left without men who were fighting for the Republican cause, the vast majority of casualties were women and children.

39. Lab assistant in many a horror film : IGOR

The lab assistant named Igor has turned up in many movies in recent decades, and usually appears as the aide to Dr. Frankenstein. Paradoxically, in Mary Shelley’s original novel, Frankenstein had no assistant at all. Further, the lab assistant introduced in 1931 in the first of the “Frankenstein” series of movies was named Fritz. Bela Lugosi played a character named Ygor in “Frankenstein” sequels in 1939 and 1946, but he was a blacksmith and didn’t work in the lab.

Our word “natal” comes from the Latin “natalis” meaning “pertaining to birth”.

Ian McShane is an English actor, who is famous in his homeland (and to PBS viewers in the US) for playing the title role in “Lovejoy”. In this country he is perhaps better known for playing the conniving saloon owner on the HBO western drama “Deadwood”.

Sir Ian McKellen is a marvelous English actor, someone who is comfortable playing anything from Macbeth on stage to Magneto in an “X-Men” movie. On the big screen, McKellen is very famous for playing Gandalf in “The Lord of Rings”. In the UK, Sir Ian is noted for being at the forefront of the campaign for equal rights for gay people, a role he has enthusiastically embraced since the eighties.

The great Arthur (sometimes “Artur”) Rubinstein was a classical pianist from Poland who became a naturalized American citizen in 1946. Rubenstein was particularly respected as a performer of Chopin’s repertoire.

The Agua Fria River runs from a spot near the city of Prescott, Arizona south through the Agua Fria National Monument and into Lake Pleasant located near Peoria, Arizona. “Agua Fria” translates from Spanish as “Cold Water”.

I’ve always thought that the phrase “Voulez-vous coucher avec moi ce soir?” was grammatically “odd”. The expression is sexually suggestive, meaning “Would you like to sleep with me tonight?” The problem is that the use of the formal (or plural!) “vous” instead of the familiar “tu” indicates a lack of intimacy that should be present in such a forward invitation. Apparently, the phrasing is perhaps correct if the speaker was a high-class escort using formal grammar with a client.

“To excoriate” is to abrade or chafe. It also means to strongly denounce something or someone.

I loved the “Nancy Drew” mysteries as a kid (I know, as a boy I “shouldn’t” have been reading girls’ books!). The “Nancy Drew stories” were written by a number of ghost writers, although the character was introduced by Edward Stratemeyer in 1930. Nancy Drew’s boyfriend was Ned Nickerson, a college student from Emerson.

There are lots of letters F in the word “fluff”.

55. Eliot of the Untouchables : NESS