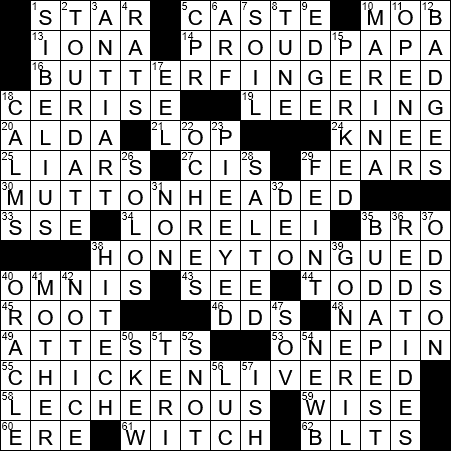 Themed answers are compound adjectives used to describe someone, with each starting with an item of food and ending with a body part:

13. Island off the western coast of Scotland : IONA

The name for the red color that we know as “cerise” is the French word for “cherry”.

20. Alan in the Television Hall of Fame : ALDA

Iceland is the most sparsely populated country in the whole of Europe, with two-thirds of the nation’s population residing in and around the capital city of Reykjavik. Iceland was settled by the Norse people in AD 874, and was ruled for centuries by Norway and then Denmark. Iceland became independent in 1918, and has been a republic since 1944. Iceland is not a member of the EU but is a member of NATO, having joined in 1949 despite not having a standing army.

“That will be ere the set of sun” is a line from William Shakespeare’s “Macbeth”, a line that is spoken by one of the three witches.

1. Composer who’s the eponym of a Helsinki park : SIBELIUS

Jean Sibelius is the most famous Finnish classical composer, and shall forever be linked with his wonderful symphonic poem “Finlandia”. Sibelius composed many lovely pieces of music right up until the mid-1920s, when he was in his fifties. Despite all his efforts, he wasn’t able to produce any notable works for the final thirty years of his life.

An eponym is a name for something derived from the name of a person, as in the food item we call a “sandwich”, named for the Earl of Sandwich.

“Heat” is a slang term for police surveillance or excessives attention from a law enforcement agency.

“Harry Houdini” was the stage name of Hungarian-born escapologist and magician Erik Weisz (later changed to “Harry Weiss”). Many people are under the impression that Houdini died while performing an escape that went wrong, an impression created by the storyline in a couple of movies about his life. The truth is that he died of peritonitis from a burst appendix. It is also true that a few days prior to his death Houdini took a series of punches to his stomach as part of his act, but doctors believe that his appendix would have burst regardless.

What was originally called the “Magic Cube” became better known as Rubik’s Cube, named for its inventor Ernő Rubik. Rubik’s Cube is the world’s biggest selling puzzle game, with over 350 million sold in just over 30 years.