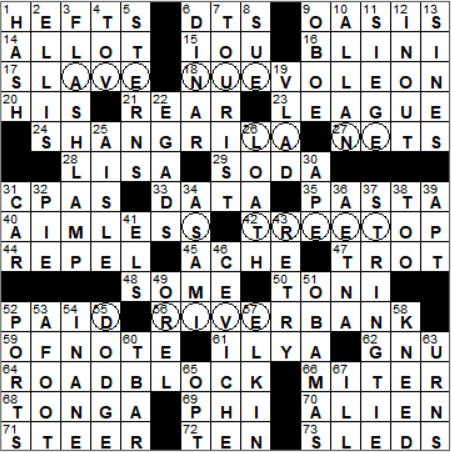 Today’s grid includes four sets of circled letters, each of which is a synonym of ROAD. That ROAD includes a black square, i.e. a ROADBLOCK:

9. Welcome sight in a desert : OASIS

An isolated area of vegetation in a desert is called an oasis (plural “oases”). As water is needed for plant growth, an oasis might also include a spring, pond or small lake. We use the term “oasis” more generally to describe a haven, a place of rest.

A blintz (also “blin”, plural “blini”) is a thin pancake similar to a crêpe although unlike a crêpe, a blintz may contain yeast.

Nuevo León is a Mexican state located across the border from the US state of Texas. The capital city of Nuevo León is Monterrey.

Sir Arthur Conan Doyle’s short story titled “His Last Bow” features the author’s most famous character Sherlock Holmes. Published during WWI in 1917, “His Last Bow” might be referred to as a propaganda tool, written with the intent of boosting morale. It is an unusual Sherlock Holmes tale in that it is not a detective story, but rather deals with British and German spies.

33. Figures on a spreadsheet : DATA

In many cases, the name given to a type of pasta comes from its shape. However, the name macaroni comes from the type of dough used to make the noodle. Here in the US, macaroni is usually elbow-shaped tubes, but it doesn’t have to be.

52. Word stamped on an invoice : PAID

Ilya Kovalchuk is a Russian-born hockey player who turned out for the Atlanta Thrashers and New Jersey Devils of the National Hockey League. Kovalchuk returned to his homeland in 2013, and signed a contract with SKA Saint Petersburg of the Kontinental Hockey League (KHL) that covers Europe and Asia.

A miter is a traditional headdress worn by bishops in some Christian traditions. The name “miter” comes from a Greek word for “headband, turban”.

The golden ratio, sometimes called the “golden mean” and denoted by the Greek letter phi, is a mathematical constant that often turns up in the world of art. Phi is approximately equal to 1.61, and is represented by the two distances, a and b, where (a+b)/a = a/b. Somehow we perceive the ratio of 1.61 as “pleasing” so it appears in many works of art and in building design. For example, many aspects of the Parthenon in Athens have the ratio of 1.61 (width compared to height). Leonardo da Vinci’s famous drawing of the Vitruvian Man also illustrates the golden ratio in the proportions of the human body, where he shows that the distance from the foot to the navel, compared to the distance from the navel to the head, is 1.61.

7. Reader of a Fodor’s guide : TOURIST

9. One of two to four in a standard orchestra : OBOE

We’ve all probably heard the phrase “‘tis an ill wind that blows nobody any good”. The poet Ogden Nash made a “punny” statement about the oboe, calling the instrument “an ill wind nobody blows good”. I must say though, I disagree …

The celebrated American writer Edgar Allan Poe was born “Edgar Poe” in 1809 in Boston. Poe’s father abandoned Edgar and his two siblings after the death of their mother. As a result, Edgar was taken into the home of the Allan family in Richmond Virginia. His foster parents gave the future author the name “Edgar Allan Poe”.

Vlad III was a 15th century ruler in modern-day Romania. He was given the name “Vlad the Impaler” after he died, and this suggests that he was in the habit of impaling his enemies. His father, Vlad II, was known as Vlad Dracul, which translates as Vlad the Devil or Dragon. As a result, Vlad the Impaler was also known by the diminutive form of his father’s name, i.e. “Dracula”. Bram Stoker borrowed this name for his famous 1897 novel titled “Dracula”.

36. Corporation named after a mountain : AETNA

Ceviche is a raw seafood dish that is popular in South and Central America. Ceviche is typically made from fish marinated in lemon or lime juice and spiced with hot peppers.

Orel Hershiser is big into poker, now that he has retired from Major League Baseball. Hershiser lives in Las Vegas and when he isn’t working for ESPN, apparently he is at the poker tables, playing professionally. When Hershiser is eliminated in a poker tournament, he is in the habit of presenting the person who ousts him with an autographed baseball.

We use the adjective “vapid” today to describe something that is dull, that lacks liveliness. Back in the 1600s, the term was used to describe drinks that were flat. “Vapid” comes from the Latin “vapidus”, which translates literally as “that has exhaled its vapor”.

55. Word before City or after Fort on Midwest maps : DODGE

Fort Dodge was in Kansas, on the Santa Fe Trail (connecting Missouri with Santa Fe, New Mexico). The fort was named after Major General Grenville M. Dodge who was in charge of the army presence in the area. Fort Dodge gave its name to Dodge City, which grew up nearby the fort.

Stanley Elkin was a novelist from Brooklyn, New York who grew up in Chicago. Elkin lived most of his life in St. Louis, where he was a member of the faculty at Washington University. He published ten novels, mostly dealing with pop culture of the fifties and sixties.