Constructed by: Peter Koetters
Edited by: Will Shortz 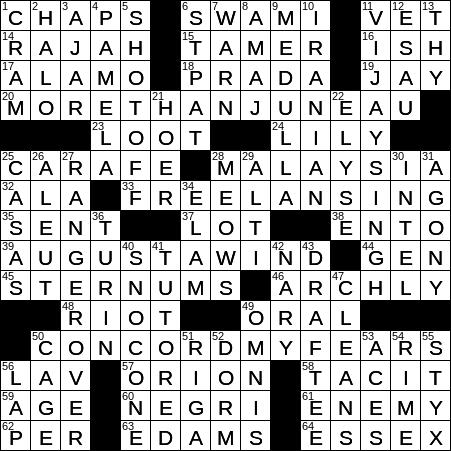 Themed answers (sorta) sound like common phrases, but actually include the capital of the state mentioned in each themed clue:

“Chap” is an informal term for “lad, fellow”, that is used especially in England. The term derives from “chapman”, an obsolete word meaning “purchaser” or “trader”.

17. Alternative to National or Enterprise : ALAMO

Prada was started in 1913 as a leather-goods shop in Milan, by the two Prada brothers. One of the brothers, Mario Prada, prevented the female members of his family participating in the company as he didn’t believe women should be involved in business (!). When the sexist brother died, his son had no interest in the business so it was his daughter who took over and ran the company for about twenty years, handing it over to her own daughter. I’d say the devil loved that …

Given that it’s the capital of the vast state of Alaska, it is perhaps not surprising to learn that the municipality of Juneau is almost as big as the area of the states of Rhode Island and Delaware combined, and yet has only a population of about 31,000 people!

The capital city of Malaysia is Kuala Lumpur, which is very often abbreviated to “KL”. The name “Kuala Lumpur” translates into English as “muddy estuary”. Famously, KL is home to the spectacular Petronas Twin Towers, which are currently the tallest twin towers in the world and was the tallest of any building from 1998 to 2004.

33. “Writers and photographers will find Michigan a great place for ___!” : FREE LANSING (sounds like “freelancing”)

Pola Negri was a Polish actress, and the first star to be invited from Europe to develop a career in Hollywood. Most of her success came in the silent era, but she was able to make the transition to the talkies. Her off-screen life attracted the attention of the gossip columnists who rejoiced in her affairs with the likes of Charlie Chaplin and Rudolph Valentino.

“Halo” is a series of video games that was introduced in 2001. Apparently, there’s a lot of shooting, and a lot of aliens …

Pamela Anderson is a Canadian/American actress and model, whose most famous TV roles were on the shows “Home Improvement” and “Baywatch”. Anderson is a hot topic in the gossip columns, especially after a honeymoon sex tape was stolen from her home. Beyond all the hype, she is a very committed animal rights activist, having become a vegetarian in her teens after seeing her father cleaning an animal that he had killed while hunting.

10. Citizen of a theocratic republic : IRANIAN

13. Possessive in the Ten Commandments : THY

“Family Ties” was one of the first TV shows that I enjoyed when I arrived in the US back in 1983. I found the situation very appealing, with two ex-hippie parents facing off against an ultra-conservative son. The main characters in the show were Michael J. Fox as Alex, Meredith Baxter-Birney as Alex’s mom, Elyse, and Michael Gross as Alex’s Dad, Steven. But some future stars had recurring roles as well, including Courteney Cox as one of Alex’s girlfriends and Tom Hanks as Elyse’s young brother.

The ancient civilization of Elam was located east of Mesopotamia, in what is modern-day southwest Iran.

The Shroud of Turin has to be one of the most controversial, and most studied, human artifacts ever unearthed. The Shroud is a linen cloth on which there is the image of a man who appears to have wounds inflicted by crucifixion. Many believe that the Shroud is the burial cloth in which Jesus Christ was placed after he died on the cross. The Shroud was kept in various locations in France for centuries before being moved to Turin Cathedral in 1578, from which it gets its name, and where it has been located ever since.

Mikhail “Misha” Baryshnikov started his dancing career with the Kirov Ballet in Leningrad before defecting to Canada in 1974. The only time my wife ever lined up to get an autograph was when she did so outside the stage door after seeing Baryshnikov dance in Syracuse, New York many moons ago. The man is a god in her eyes …

The River Styx in Greek mythology was the river that formed the boundary between the Earth and the Underworld (or “Hades”). The souls of the newly dead had to cross the River Styx in a ferry boat piloted by Charon. Traditionally, a coin would be placed in the mouths of the dead “to pay the ferryman”.