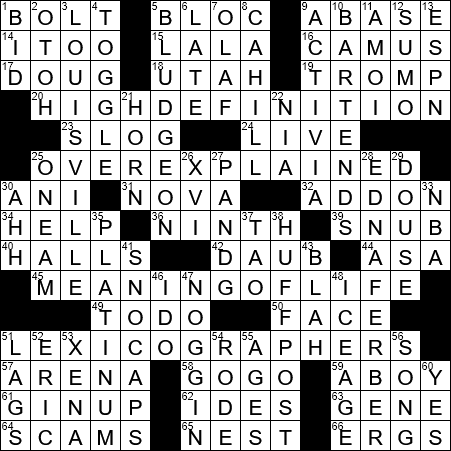 Themed answers are common phrases, but are clued as if they are dictionary entries written by LEXICOGRAPHERS:

1. Something sticking out of Frankenstein’s neck : BOLT

A kind, and observant, blog reader pointed out that the bolt, it’s sticking out of the neck of Frankenstein’s monster. Dr. Frankenstein’s neck is pretty much intact.

14. Classic Langston Hughes poem : I, TOO

16. French author who said “An intellectual is someone whose mind watches itself” : CAMUS

William Henry Harrison died in 1841, after only one month in office, simply from complications arising from a cold. Harrison was the oldest person to assume the office of US president, until President Reagan in 1981. He was the first president to die in office, and served the shortest tenure.

Halls brand of cough drops were first made by Halls Brothers in England in the 1930s.

A selfie is a self-portrait, usually one taken with a digital camera or cell phone. A “group selfie” is sometimes referred to as a “groufie” or “wefie”. A “couple selfie” is known as an “usie” or “ussie”, although those terms are sometimes also used for a group picture.

“About a Boy” is a 2002 film adaptation of a 1988 novel of the same name by Nick Hornby (who also wrote “High Fidelity” and “Fever Pitch”, which were also turned into successful movies). “About a Boy” stars Hugh Grant and Toni Collette, with Nicholas Hoult playing the title character. Hornby’s novel has now been adapted for the small screen, and a TV series of the same name premiered on NBC in 2014.

Nia Vardalos is an actress and screenwriter whose biggest break came with the 2002 film “My Big Fat Greek Wedding”, which she wrote and in which she starred. The film tells the story of a Greek-American woman marrying a non-Greek Caucasian American who converts to the Greek Orthodox Church to facilitate the marriage. The storyline reflects the actual experiences of Vardalos and her husband, actor Ian Gomez. Vardalos and Gomez appeared together as hosts for two season of the reality competition “The Great American Baking Show”.

27. Consumer giant that makes Bounty, for short : P AND G

Bounty is a brand of paper towel made by Procter & Gamble.

A relatively well-preserved set of woolly mammoth remains were discovered in Siberia in 2012. The remains included some intact cells, and there is talk about the possibility of cloning the animal who died between 4,000 and 10,000 years ago. Scary stuff …

iTunes is a very, very successful software application from Apple. It’s basically a media player that works on platforms like the iPad, iPhone and iPod. It connects seamlessly to the iTunes store, where you can spend all kinds of money.