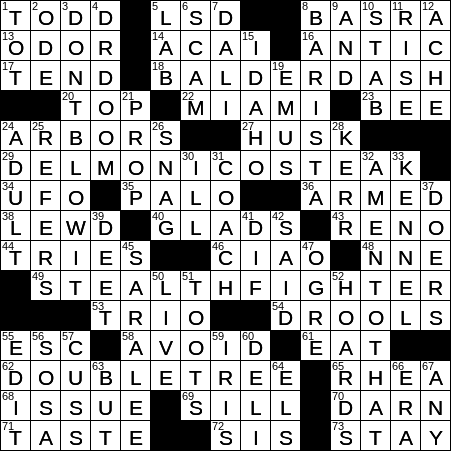 Chuck Todd is a television journalist. Todd was the Chief White House Correspondent for NBC, before taking over as moderator of “Meet the Press” in 2014.

8. Iraqi city whose name, appropriately, is an anagram of ARABS : BASRA

14. Berry for a purple smoothie : ACAI

“Balderdash” means “senseless jumble of words”. The original balderdash (back before the late 1600s) was a jumbled mix of liquids like maybe beer and wine, or even beer and milk!

A Delmonico steak is prepared these days from various cuts of beef, and prepared in a style created originally by Delmonico’s Restaurant in New York City in the mid-1800s.

“Ciao” is the Italian for “‘bye”. “Arrivederci” is more formal, and translates as “goodbye”.

Rhea Perlman’s most famous role has to be “Carla Tortelli”, the irascible waitress in the long-running sitcom “Cheers”. Perlman is also a successful children’s author, and has published a series of six books called “Otto Undercover”. She is married to Hollywood actor Danny DeVito, and has been so since 1982.

68. National Geographic has a new one every month : ISSUE

The National Geographic Society started as a club for academics and wealthy people interested in travel, founded in 1888 in Washington, D.C. The society’s “National Geographic Magazine” was first published at the end of the same year. I’ve always thought it very cool that the logo of the society (you can see it on the National Geographic cable TV channel) is simply the rectangular yellow frame that appears in the margins around the front cover of the magazine.

Khloé Kardashian, sister of Kim, managed to parlay her exposure on the reality show “Keeping Up with the Kardashians” into spin-offs called “Kourtney and Khloé Take Miami” and “Khloé & Lamar”. Guess how many episodes of those three shows that I’ve seen …

3. Snarky comment after “This is your big chance” : DON’T BLOW IT

Doctor Doom is a supervillain created in the Marvel Comics universe, an archenemy of the Fantastic Four.

The Fantastic Four is a team of superheroes in Marvel Comics universe. The team is made up of Mister Fantastic, the Invisible Woman, the Human Torch and the Thing.

8. Server at a coffeehouse : BARISTA

The person who serves coffee in a coffee shop is often called a “barista”. “Barista” is the Italian for “bartender”.

“Glitch” comes into English from German via Yiddish. The original German word is “glitschen” meaning “to slip”. It is a relatively new term, generally applied to computer software bugs.

The lovely Deborah Kerr was a Scottish actress who made a real name for herself on the American stage and in Hollywood movies. Despite all her success, and six nominations for a Best Actress Oscar, Kerr never actually won an Academy Award. In 1967, she appeared in the James Bond film “Casino Royale” at the age of 46, making her oldest Bond Girl of all time.

Iris is a genus of flowering plants that come in a wide variety of flower colors. The term “iris” is a Greek word meaning “rainbow”. Many species of irises are called “flags”. One suggestion is that the alternate name comes from the Middle English “flagge” meaning “reed”. This term was used because irises leaves look like reeds.