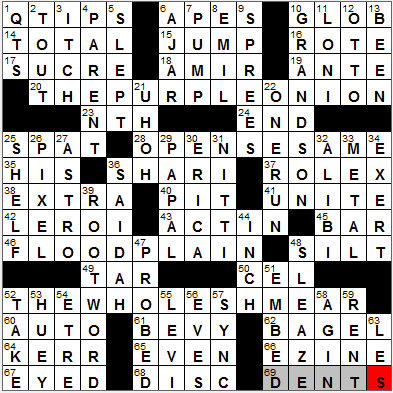 CROSSWORD SETTER: Andrea Carla Michaels & Michael Blake
THEME: Bagels … three of the theme answers end with flavors of bagel, and the last theme answer alludes to a SHMEAR that one might put on any of those bagels:

20A. Legendary San Francisco music/comedy club where Lenny Bruce and Woody Allen have performed : THE PURPLE ONION (an onion bagel)
28A. Ali Baba’s magic words : OPEN SESAME (a sesame bagel)
46A. Bad place to live when the river rises : FLOOD PLAIN (a plain bagel)
52A. Everything … or what might cover an everything 62-Across? : THE WHOLE SHMEAR (a bagel with a schmear)
62A. Item whose varieties include the endings of 20-, 28- and 46-Across : BAGEL

1. You can stick them in your ear : Q-TIPS
Cotton swabs were originally marketed under the name “Baby Gays”, but this was changed in 1926 to “Q-Tip”, with the Q standing for “quality”.

17. Bolivian capital : SUCRE
Sucre is the constitutional capital of Bolivia, although the La Paz is the seat of government.

18. Mideast leader: Var. : AMIR
In English, emir can also be written as amir and ameer (watch out for those spellings in crosswords!).

19. The “a” in a.m. : ANTE
The 12-hour clock has been around a long time and was even used in sundial format in Ancient Egypt. Our use of AM and PM dates back to Roman times, with AM standing for Ante Meridiem (before noon) and PM standing for Post Meridiem (after noon). Today we use the concept of AM and PM differently than it was intended. In Ancient Rome, 2 AM say, was 2 hours Ante Meridiem, two hours before noon, which makes sense grammatically anyway. We call that same time 10 AM.

20. Legendary San Francisco music/comedy club where Lenny Bruce and Woody Allen have performed : THE PURPLE ONION
The Purple Onion is a small club in the North Beach area of San Francisco that has been around since 1952. It is primarily a comedy club, and has the reputation of giving big names their start in show business. People who played the Purple Onion early in their careers include Jim Nabors, Bob Newhart, Lenny Bruce, Woody Allen and the Smothers Brothers.

28. Ali Baba’s magic words : OPEN SESAME
In the Arabic tale “Ali Baba and the Forty Thieves”, the magical cave entrance is opened with the words “Open, Simsim”, but this mutated into “Open Sesame” in European translations.

36. Puppeteer Lewis : SHARI
Shari Lewis was the original puppeteer behind the PBS children’s show “Lamb Chop”. After she died in 1998, Lewis’s daughter Mallory took over her role.

37. High-end watchmaker : ROLEX
My most prized possession is a stainless steel Rolex watch that my uncle bought while serving with the RAF in Canada during WWII. Rolex watches were made available to the Canadian servicemen at that time as they were shipping overseas. My uncle brought his Rolex home to Ireland after the war. He needed money for booze one weekend and so sold the watch to my Dad, for five pounds. My Dad gave it to me just before he died, as he knew I loved the watch, and my brothers weren’t interested in it. Not so long ago I had it appraised ($3,000!), and my brothers all of a sudden became more interested! Still, it’s not something that will ever be sold, that’s for sure.

42. Poet/playwright Jones : LEROI
The highly controversial poet and playwright LeRoi Jones changed his name to Amiri Baraka in 1967. A native of Newark, New Jersey, Baraka was named Poet Laureate of his home state in 2002, just ten months after the September 11 attacks. When the New Jersey Governor found out that Baraka had written a poem and made statements that he believed President George W. Bush and Israel were involved in the terrorist attacks, the Governor tried to remove him from the post of Poet Laureate, eventually having to resort to abolishing the post altogether.

50. Cartoon frame : CEL
In the world of animation a cel is a transparent sheet on which objects and characters are drawn. In the first half of the 20th century the sheet was actually made of celluloid, giving the “cel” its name.

52. Everything … or what might cover an everything 62-Across? : THE WHOLE SHMEAR
The word “schmear” comes from the Yiddish word “shmir” meaning “spread”. The phrase “the whole schmear” is a relative recent one, dating back to around 1969 and coming from the world of business.

60. The “A” in U.A.W. : AUTO
The United Auto Workers (UAW) was founded to represent workers in auto plants in the Detroit area in 1935. Nowadays its membership extends into the Aerospace, Agriculture and other industries.

61. Group of birds : BEVY
“Bevy” is a collective noun used for a number of types of bird, including quail and swans.

62. Item whose varieties include the endings of 20-, 28- and 46-Across : BAGEL
The bagel was invented in the Polish city of Kraków in the 16th century. Bagels were brought to this country by Jewish immigrants from Poland, who mainly established homes in and around New York City.

64. Deborah of “The King and I” : KERR
The lovely Deborah Kerr was a Scottish actress who made a real name for herself on the American stage and in Hollywood movies. Despite all her success, and six nominations for a Best Actress Oscar, she never actually won an Academy Award. In 1967 she appeared in the James Bond film “Casino Royale” at the age of 46, the oldest Bond Girl of all time.

68. 45 or 78 : DISC
The first standard set for rotational speed of gramophone records was 78 rpm, but like so many things it seems, the US version of “78” was slightly different from that for the rest of the world. The US record was designed to play at 78.26 rpm, whereas the standard in the rest of the world was 77.92 rpm. So, imported records playing on American equipment didn’t sound quite as they were intended.

3. “The Seven Year ___” : ITCH
“The Seven Year Itch” is a 1955 movie by Billy Wilder, based on a stage play of the same name by George Axelrod. It stars Marilyn Monroe and Tom Ewell (as the guy with “the itch”). Perhaps the most famous scene in the film is the one with Monroe standing over a subway grate allowing the updraft to billow the skirt of her white dress above her knees. It was meant to cool her down, but I think it had the opposite effect on some in the audience! The phrase “seven year itch” had been used by psychologists to describe declining interest in staying monogamous after seven years of marriage.

6. Not fully shut : AJAR
Our word “ajar” is thought to come from Scottish dialect, in which “a char” means “slightly open”.

8. Actor Jannings who won the first Best Actor Oscar : EMIL
Emil Jannings, an actor from Switzerland, was the first person to receive an Oscar. He was the star of the 1928 silent movie called “The Last Command”.

11. Actress Anderson : LONI
Loni Anderson’s most famous role was that of Jennifer Marlowe on the sitcom “WKRP in Cincinnati”. Anderson has been married four times, most famously to actor Burt Reynolds from 1988 to 1993.

12. “Beetle Bailey” bulldog : OTTO
Sgt. Snorkel is Beetle Bailey’s nemesis in the cartoon strip that bears his name. Snorkel has a dog called Otto that he dresses up to look just like himself. Otto started off as a regular dog, but artist Mort Walker decide to draw him more like his owner, and he became a big hit.

26. Dot on a computer screen : PIXEL
A pixel is a dot, the base element that goes to make up a digital image.

27. Houston baseballer : ASTRO
The Houston baseball team changed its name to the Astros from the Colt .45s in 1965 when they started playing in the Astrodome. The Astrodome was so called in recognition of the city’s long association with the US space program.

31. Capone henchman : NITTI
Frank Nitti was one of the top henchmen working for Al Capone. Unlike Capone, who was born in Brooklyn, New York, Nitti was actually born in Italy, near the city of Salerno. When Capone was eventually put away for 11 years for tax evasion, Netti was convicted of the same crime. Nitti was only imprisoned for 18 months, and when released he was labelled as the new head of Capone’s Chicago Outfit. However the truth seems to be that he was just a front man, with others making the decisions.

32. What a murder suspect needs : ALIBI
“Alibi” is the Latin word for “elsewhere” as in, “I claim that I was ‘elsewhere’ when the crime was committed … I have an ‘alibi'”.

33. Zinc or zirconium : METAL
Most of the world’s zinc comes from China, with Peru being the second largest producer.

39. The Greek “khalix” (pebble) for the English “calculus,” e.g. : ROOT WORD
The Latin word “calculus” was used for a reckoning or an account, and originally applied to a pebble that was used to maintain a count. The Latin word came from the Greek for a pebble, “khalix”.

48. Schlock : SLEAZE
Schlock is trash, something shoddy. It comes from the American Yiddish word “shlak”, with the same meaning.

53. ___ Lewis and the News : HUEY
Huey Lewis and the News are a local band out here in the Bay Area, based in San Francisco. When the movie “Ghostbusters” came out in 1984, the band sued Ray Parker, Jr. who wrote the film’s theme song, claiming that it was very similar to their own song, “I Want a New Drug”. The case was settled out of court and the following year “Huey Lewis and the News” made the most of an opportunity to write a movie theme themselves. Their smash hit “The Power of Love” was written for “Back to the Future”, and propelled the band into stardom.

Lévy is a family name in France.

55. ___ Strauss jeans : LEVI
Levi Strauss was the founder of the first company in the world to manufacture blue jeans. Levi Strauss & Co. opened in 1853 in San Francisco. Strauss and his business partner were awarded a patent in 1873 for the use of copper rivets to strengthen points of strain on working pants.

63. “___ Misérables” : LES
The 1980 musical “Les Miserables” is an adaptation of the 1862 novel of the same name by Victor Hugo. It opened in London in 1985, and is the longest running musical in the history of London’s West End. My wife and I saw “Les Miz” in the Queen’s Theatre in London quite a few years ago, but were only able to get tickets in the very back row. The theater seating is very steep, so the back row of the balcony is extremely high over the stage. One of the big events in the story is the building of a street barricade over which the rebels fight. At the height we were seated we could see the stagehands behind the barricade, sitting drinking Coke, even having a cigarette. On cue they would get up and catch a dropped rifle, or an actor that had been shot. It was pretty comical. I didn’t really enjoy the show that much, to be honest. Some great songs, but the storyline just didn’t seem to hang together for me.