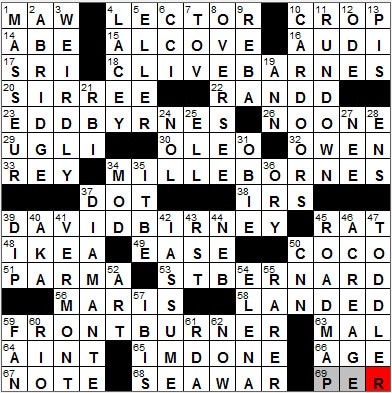 CROSSWORD SETTER: Bernice Gordon
THEME: B-rn with All the Vowels … each of the theme answers includes the letters “B-RN” with the dash being replaced by each of the vowels, including “Y”.

4. Person assisting a worship service : LECTOR
In a religious service, a lector is someone tasked with reading passages from Holy Scripture. “Lector” is Latin for “reader”.

14. Lincoln, the Rail-Splitter : ABE
Before Abraham Lincoln was elected president, his political campaign used the nick-name “the Rail-Splitter” to emphasize his humble upbringing. Lincoln had worked at splitting fence rails in his youth.

16. Auto company whose name is Latin for “listen” : AUDI
The Audi name has an interesting history. The Horch company was founded by August Horch in 1909 but soon after, Horch was forced out of his own business. He set up a new company and continued to use his own name as a brand. The old company sued him for using the Horch name so a meeting was held to choose something new. Horch’s young son was studying Latin in the room where the meeting was taking place. He pointed out that “Horch” was German for “hear”, and he suggested “Audi” as a replacement, the Latin for “listen”.

18. Longtime New York theater critic : CLIVE BARNES
Clive Barnes was the dance and theater critic for “The New York Times” for many years, from 1965 to 1977. Although Barnes lived in New York City, he was born and raised in England. While living and working in the US he still wrote for many of the top publications in the UK.

22. Corporate dept. that may include labs : R AND D
Research and Development.

23. Actor in 1960s TV’s “77 Sunset Strip” : EDD BYRNES
I used to watch “77 Sunset Strip” as a lad growing up in Ireland. It is an American show that ran from 1958 to 1964. Two of the central characters are former government secret agents, now working as private detectives. Efrem Zimbalist, Jr. plays Stu Bailey, and Roger Smith plays Jeff Spencer. And who can forget Kookie, played by Edd Byrnes?

29. Tropical citrus fruit : UGLI
The ugli fruit is a hybrid of an orange and a tangerine, first discovered growing wild in Jamaica where most ugli fruit comes from today.

30. Fleischmann’s product : OLEO
Emperor Louis Napoleon III of France announced a competition to develop a substitute for butter, a substitute that would be more accessible to the lower classes and more practical for the armed forces. A French chemist called Hippolyte Mege-Mouries came up with something he called oleomargarine in 1869, which was eventually manufactured under the trade name “margarine”. The name “oleomargarine” also gives us our generic term “oleo”.

34. Popular card game since 1954 : MILLE BORNES
Milles Bornes translates into “A Thousand Milestones”, and is a French card game. It’s a relatively young game, invented in 1954, and you can buy it in stores today. I’ve read that it is similar to an American card game called “Touring”, but I’m not familiar with either.

38. Org. issuing many refunds : IRS
The Internal Revenue Service (IRS) came into being during the Civil War, to raise money to pay for war expenses. Prior to the introduction of income tax in 1862, the government was funded by levies on trade and property.

39. TV/film/stage actor once married to actress Meredith Baxter : DAVID BIRNEY
American actor David Birney had a recurring role on television’s “St. Elsewhere”, as well as a starring role on the short-lived CBS sitcom “Bridget Loves Bernie”. It turned out that Bridget did indeed love Bernie, and the two lead actors, David Birney and Meredith Baxter were married in real life soon after the show went off the air in 1973. They fell out of love though and were divorced in 1989, but have three children together.

48. International furniture retailer : IKEA
Did you know that IKEA was founded by Ingvar Kamprad in 1943, when he was just 17-years-old??!! IKEA is an acronym that stands for Ingvar Kamprad Elmtaryd Agunnaryd (don’t forget now!). Elmtaryd was the name of the farm where Ingvar Kamprad grew up, and Agunnaryd is his home parish in Sweden.

50. Madame Chanel : COCO
Coco Chanel was a French designer. Perhaps because I am a man, clothes design is not my forte, however, if I had to pick a designer whose clothes I really liked, it would be Chanel. She had a way of creating simpler designs that looked so elegant on a woman.

51. Italian city famous for its cheese : PARMA
I guess Parmesan is meant to the adjective “from Parma”. Parma is a city in northern Italy, famous for its ham and cheese.

53. Big dog : ST BERNARD
The St. Bernard dog originated in the Italian and Swiss alps, and was indeed specially bred for rescue. The breed dates back at least to the early 1700s when the dogs worked from the traveler’s hospice at the St. Bernard Pass in the Alps between Italy and Switzerland. The breed took its name from this famously treacherous route through the mountains.

56. Yankee great Roger : MARIS
Roger Maris (whose real name was Roger Maras) was the son of Croatian immigrants. It was Maris’s single-season record of 61 home runs that Mark McGwire broke in 1998 (hitting 70 that season). Maris’s own record of 61 runs (from 1961) beat the previous record of 60 set in 1927 by Babe Ruth.

64. “___ She Sweet” : AIN’T
“Ain’t She Sweet” is a popular song first published in 1927, composed by Milton Ager and Jack Yellen. Ager wrote the song for his daughter, Shana. Shana grew up to become Shana Alexander, a political commentator on CBS’s “60 Minutes”.

Down
4. ___ Davenport, long-running “Doonesbury” character : LACEY
Lacey Davenport is a character in the comic strip “Doonesbury”, drawn by Garry Trudeau. In the storyline, Lacey is a Republican politician from the San Francisco Bay Area.

5. Aunt ___ of “Oklahoma!” : ELLER
“Oklahoma!” was the first musical written by the great duo Richard Rodgers and Oscar Hammerstein II. The storyline comes from a 1931 stage play called “Green Grow the Lilacs”.

7. “Mazel ___!” : TOV
Mazel tov is the Yiddish term for “good luck!”. I believe that mazel tov is used in the sense that good fortune has already occurred and is being acknowledged, whereas in English our wish of “good luck” is for the future.

9. Singer McEntire : REBA
Reba McEntire is country music singer and television actress. She starred in her own sitcom called “Reba” that aired on the WB and the CW cable channels from 2001 to 2007.

12. Pindar creation : ODE
Pindar was an Ancient Greek poet, best known perhaps for composing a series of Victory Odes that celebrated triumph in competition, most notably the Olympian Games of the day.

19. The Atlantic’s Cape ___ : ANN
Cape Ann is 30 miles north of Boston and is on the northernmost edge of Massachusetts Bay. The Cape was first mapped by the explorer John Smith. Early in his adventurous life Smith had been captured and enslaved by the Ottoman Empire. His “owner” in his days of slavery was a woman called Tragabigzanda, and apparently the slave and owner fell in love. What we know today as Cape Ann, Smith originally called Cape Tragabigzanda, in her memory.

24. ___ pros. (court record abbr.) : NOL
“Nolle prosequi” is a Latin phrase that translates literally as “to be unwilling” (nolle) “to pursue” (prosequi). In the arena of law, a declaration of nolle prosequi (shortened to nol. pros.) by a plaintiff or prosecutor is a declaration that all or part of the case will be dropped.

27. Born, in Brittany : NEE
“Née” is the French word for “born”, when referring to a female. The male equivalent is “né”.

28. Naval officer below lieut. : ENS
An ensign is the most junior rank of commissioned officer (usually) in the armed forces. The name comes from the tradition that the junior officer would be given the task of carrying the ensign flag.

31. Annual theater award : OBIE
The Obies are the “Off-Broadway Theater Awards”. They are given annually, and the recipients are chosen by “The Village Voice” newspaper.

35. Barry Manilow’s “Could ___ Magic” : IT BE
Barry Manilow’s real name is Barry Alan Pincus. Barry took his mother’s family name, Manilow, as the time of his Bar Mitzvah. When he was young, Manilow attended the Julliard performing arts school, and then practiced his craft on the New York City music circuit. He worked in the sixties and seventies writing jingles for advertisements. “Like a good neighbor, State Farm is there …”, that’s the work of Mr. Manilow!

41. First U.S. state to abolish slavery : VERMONT
When the Constitution of Vermont was adopted in 1777, it was the first constitution in North America that specifically abolished slavery. It was also the first to provide a vote to all males, regardless of stature within society, and the first to require public support of schools.

44. Beak : NEB
“Nib” is a Scottish variant of the Old English word “neb”, with both meaning the beak of a bird. This usage of “nib” as a beak dates back to the 14th century, with “nib” meaning the tip of a pin or quill coming a little later, in the early 1600s.

50. Piers Morgan’s channel : CNN
Piers Morgan made a name for himself over in the UK as a journalist and then editor of some pretty trashy tabloid newspapers. He had a reputation for being very forceful in investigating the lives of celebrities and is now very much embroiled in the phone-hacking scandals that have rocked British society through 2011. He broke into television in the US as a judge on “America’s Got Talent”, and was (surprisingly, I’d say!) chosen to replace Larry King on CNN.

54. Justice Kagan : ELENA
Elena Kagan was the Solicitor General of the United States, and not too long ago replaced Justice John Paul Stevens on the US Supreme Court. That made Justice Kagan the fourth female US Supreme Court justice (there have been 108 men!). I hear she is a fan of Jane Austen, and used to reread “Pride and Prejudice” once a year. Not a bad thing to do, I’d say …

57. Long-legged wader : IBIS
The ibis is a wading bird, revered in ancient Egypt. “Ibis” is an interesting word grammatically speaking. You can have one “ibis”, two “ibises” and a flock of “ibis”. And if you want to go with the classical plural, you can have two “ibides”!

60. ___ de la Plata : RIO
When the Uruguay River and the Paraná River come together on the border between Argentina and Uruguay, they form the Rio de la Plata. “Rio de la Plata” translates as “River of Silver” from Spanish, but in English we sometimes call the waterway the River Plate. The famous WWII action known as the Battle of the River Plate took place out to sea a few miles from the River Plate estuary. The German battleship Admiral Graf Spee took refuge in the River Plate in the neutral port of Montevideo. Forced to return to sea, and to the Royal Naval vessels waiting for her, Berlin gave orders for the Graf Spee to be scuttled in the estuary.