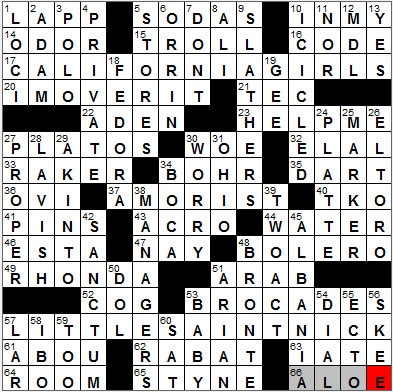 
Today’s Wiki-est, Amazonian Googlies
Across
1. Reindeer herder : LAPP
Lapland is a geographic region in northern Scandinavia, largely found within the Arctic Circle. Parts of Lapland are in Norway, Sweden and Finland. The people who are native to the region are called the Sami people. The Sami don’t like to be referred to as Lapps, and regard the term as insulting.

5. Sprites, for instance : SODAS
Sprite is Coca-Cola’s answer to the very successful soft drink called 7 Up. Sprite was introduced in 1961, and Coca-Cola used its muscle to topple 7 Up from its dominant position in the market. Sprite has been the number-one selling lemon soda since 1978.

14. Lysol target : ODOR
The disinfectant called Lysol takes its name from the words “lysosome” and “solvent”. Lysosomes are structures found within cells that have the job of breaking up waste material and cellular debris.

15. Fairy tale figure : TROLL
“Troll” is a term that comes from Norse mythology. Trolls are less than helpful creatures that tend to live on isolated mountains, in caves and under bridges.

17. 1965 Beach Boys hit : CALIFORNIA GIRLS
“California Girls” was released in 1965 by the Beach Boys, and reached number three in the “Billboard” charts. Twenty years later David Lee Roth recorded a very successful cover version of the song, and it reached exactly the same spot in the charts, number three.

21. Gumshoe : TEC
Gumshoe is a slang term for a private detective or private investigator (P.I.). Apparently the term “gumshoe” dates back to the early 1900s, and refers to the rubber-soled shoes popular with private detectives at that time.

22. Gulf of ___ : ADEN
Aden is a seaport in Yemen, located on the Gulf of Aden by the eastern approach to the Red Sea. Aden has a long history of British rule, from 1838 until a very messy withdrawal in 1967.

27. ___ Retreat (1970s-’80s New York City club) : PLATO’S
Plato’s Retreat was a famous swingers’ club in New York City, located in the basement of the Ansonia Hotel in the Upper West Side of Manhattan. Before it became Plato’s Retreat, the space was known as the Continental Baths, a gay bathhouse where Bette Midler started out her singing career. Plato’s Retreat, and the city’s gay bathhouses, were all shut down in 1985 by Mayor Ed Koch as a response to the HIV/AIDS epidemic.

32. Mideast carrier : EL AL
El Al (Hebrew for “to the skies”) does not fly on the Sabbath, although this has been subject of some controversy at times since the airline’s founding in 1948.

33. Fall guy? : RAKER
When the leaves fall in the fall, there are lots of rakers out there …

34. 1922 Physics Nobelist : BOHR
Niels Bohr was a Danish physicist who won his 1922 Nobel Prize for his work on quantum mechanics and atomic structure. Later in his life he was part of the team working on the Manhattan Project, developing the first atomic bomb.

40. Thrilla in Manila outcome : TKO
Muhammad Ali and Joe Frazier had three memorable fights. The first was billed as the “Fight of the Century” in 1971 in Madison Square Garden, a fight between two great boxers, both of whom were undefeated up till that point. Frazier won in a unanimous decision after fifteen rounds. A couple of years later, in 1973, Frazier lost his title to George Foreman. Ali and Frazier had a non-title rematch in 1974, with Ali coming out ahead this time, also in a unanimous decision. Later that year, Ali grabbed back the the World Heavyweight Title in “The Rumble in the Jungle”, the famous “rope-a-dope” fight against George Foreman. That set the stage for the third and final fight between Ali and Frazier, “The Thrilla in Manila”. Ali won the early rounds, but Frazier made a comeback in the middle of the fight. Ali took control at the end of the bout, so much so that Frazier wasn’t able to come out of his corner for the 15th and final round. He couldn’t come out of his corner because both of his eyes were swollen shut, giving Ali a victory due to a technical knock out (TKO).

43. Prefix with -polis : ACRO-
The term “Acropolis” translates from Greek as “high city” or “city on the extremity”. In English we use the term “Citadel” to mean the same thing thing. The most famous citadel bearing the name is the Acropolis of Athens. This Acropolis is a large, flat-topped rock in the city of Athens that rises almost 500 feet above sea level. The most recognizable building that stands on the Acropolis is the Parthenon, also known as the Temple of Athena.

48. Dance accompanied by castanets : BOLERO
The name “bolero” is used to describe slow-tempo Latin music, and can be both a dance and a song.

51. Victim in Camus’s “The Stranger,” e.g. : ARAB
“The Stranger” was Albert Camus’s first novel, and it is probably his most famous. The original title in French is “L’Étranger”, which can indeed be translated as “The Stranger”. However, the book is usually called “The Outsider” when translated into English, as this alternative meaning of “L’Étranger” better reflects the novel’s theme.

57. 1963 Beach Boys hit : LITTLE SAINT NICK
The title of the Beach Boys hit is usually written “Little Saint Nick”. It was written for the Christmas market of 1963 and made it to number three in the charts. That year was a quiet holiday season, as it just followed the assassination of President Kennedy.

61. “___ Ben Adhem” (English poem) : ABOU
Abou Ben Adhem, also known as Ibrahim Bin Adham, was an Arab Muslim saint. He was made famous in the western world with the publication in 1838 of the poem “Abou Ben Adhem” by James Henry Leigh Hunt, the English poet.

62. African capital : RABAT
Rabat is the capital city of Morocco. After WWII, the United States maintained a major Air Force Base in Rabat, part of Strategic Air Command (SAC). Responding to pressure by the Moroccan government of King Mohammed V, the USAF pulled out in 1963.

66. Lotion ingredient : ALOE
Aloe vera has a number of alternate names that are descriptive of its efficacy as a medicine. These include the First Aid plant, Wand of Heaven, Silent Healer and Miracle Plant.

Down
1. Sets of points, mathematically : LOCI
In mathematics, a locus (plural “loci”) is the set of all points that satisfy a particular algebraic equation. For example, for the equation 2x + 3y = 7, all the values of x and y where this equation is true is known as its locus. And for this particular equation, if you plot all those values of x and y, you’ll see that the locus forms a straight line.

3. Kind of shirt named for a sport : POLO
The game of polo originated in Iran, possibly before the 5th century BC. It was used back them primarily as a training exercise for cavalry units.

6. Sen. Hatch : ORRIN
Senator Orrin Hatch is a Republican from Utah. He’s also quite the musician, and plays the piano, violin and organ. He has composed various compositions, including a song called “Heal Our Land” that was played at the 2005 inauguration of President George W. Bush.

8. Thrilla in Manila winner : ALI
Cassius Marcellus Clay, Jr. was born in 1942 in Louisville, Kentucky, changing his name to Muhammad Ali when he converted to Islam in 1964. Who can forget Muhammad Ali lighting the Olympic flame for the 1996 games in Atlanta? Ali was presented with a gold medal during those ’96 Games, a replacement for the medal he won at the 1960 Olympics. He had thrown the original into the Ohio River as a gesture of disgust after being refused service at a “whites only” restaurant.

11. Oslo’s home: Abbr. : NOR
Oslo is an ancient city, founded around 1048. The medieval city was destroyed by fire in 1624 and was rebuilt by the Danish-Norwegian King Christian IV and renamed Christiana. In 1877 there was an official change of the name’s spelling to “Kristiana”, and then more recently in 1925 the name was restored to the original Oslo. Things have gone full circle as the center of Oslo, the area that would have been contained by the original medieval walls, has recently been named Christiana again.

12. Year of Ronsard’s “Odes” : MDL
Pierre de Ronsard was known as the “prince of poets” and was a favorite in the court of King Charles IX of France.

18. Sinatra topper : FEDORA
A fedora is a lovely hat, I think. It is made of felt, and is similar to a trilby, but has a broader brim. “Fedora” was a play written for Sarah Bernhardt and first performed in 1889. Bernhardt had the title role of Princess Fedora, and on stage she wore a hat similar to the modern-day fedora. The play led to the introductions of a women’s fashion accessory, the fedora hat, commonly worn by women into the beginning of the twentieth century. Men then started wearing fedoras, but only when women gave up the idea …

Frank Sinatra was the only child of Italian immigrants living in Hoboken, New Jersey. Like so many of our heroes, Sinatra had a rough upbringing. His mother was arrested several times and convicted of running an illegal abortion business in the family home. Sinatra never finished high school, being expelled for rowdy conduct, and he was arrested on a morals charge as a youth for carrying on with a married woman, which was an offence back then. But he straightened himself out by the time he was twenty, and started singing professionally.

24. Nebraska river : PLATTE
The Platte River used to be called the Nebrakier, which is an Oto word meaning “flat river”. For a while the it was also called the River Plate as “plate” is the French word “flat”. Later this became “Platte”, the phonetic spelling of the French “plate”.

31. Home of the Rock and Roll Hall of Fame : OHIO
I. M. Pei (full name Ieoh Ming Pei) is an exceptional American architect, born in China. Of his many wonderful works, my favorite is the renovation of the Louvre in Paris, especially the Glass Pyramid in the courtyard. I’ve never visited the Rock and Roll Hall of Fame building in Cleveland, which he also designed, but from pictures I can see that there are elements that are very similar to Pei’s work at the Louvre. There is a steel and glass pyramid protruding from the roof of the Hall of Fame that looks like it came straight from Paris.

34. ___ Raton, Fla. : BOCA
The name of the city of Boca Raton in Florida translates from Spanish as “Mouse Mouth”. There doesn’t seem to be a definitive etymology of the name, but one plausible explanation is a nautical one. “Boca”, as well as meaning “mouth” can mean “inlet”. “Ratón”, as well as meaning “mouse” was also used to describe rocks that chewed away at a ship’s cable. so possibly Boca Ration was named for a rocky inlet.

45. Neighbor of Montenegro : ALBANIA
The Republic of Albania is a country in the Balkans in southeastern Europe. Albania was made a communist state after WWII but became independent again with the collapse of the Soviet Union in 1990.

48. One of three literary sisters : BRONTE
The Brontë family lived the lovely village of Haworth in Yorkshire, England. The three daughters all became recognised authors. The first to achieve success was Charlotte Brontë when she published “Jane Eyre”. Then came Emily with “Wuthering Heights” and Anne with “The Tenant of Wildfell Hall”.

54. Zest alternative : DIAL
Dial was the first antibacterial soap introduced in the US. It was given the name “Dial” as it was touted as offering “round-the-clock” protection against any odors caused by perspiration.

56. ___-Ball : SKEE
Skee Ball is that arcade game where you roll balls up a ramp trying to “bounce” it into rings for different numbers of points. The game was first introduced in Philadelphia, in 1909.

58. Native Nigerian : IBO
Ibo is a language spoken in the Niger and Congo, more commonly known as “Igbo”.