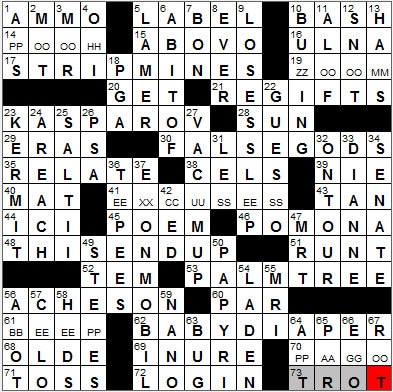 CROSSWORD SETTER: Joel Fagliano
THEME: Repeated Words … the theme answers contain double words, with the repeated letters written alongside each other, two to a square:

15. From the start : AB OVO
Ab ovo translates literally as “from the egg”.

17. Eco-unfriendly coal sources : STRIP MINES
Strip mining is a form of surface mining, a way to exploit underground minerals by stripping away the layers above the ore so that it is exposed to the surface.

19. Auto slogan beginning in 2000 : ZOOM ZOOM
Mazda is a Japanese car manufacturer based in the Hiroshima Prefecture in Japan. The ballpark where the Hiroshima baseball team play was for many years known as the MAZDA Zoom-Zoom Stadium.

23. Deep Blue’s opponent in chess : KASPAROV
Deep Blue was a computer developed by IBM specifically for playing chess. In 1996 it became the first machine to win a chess game against a reigning world champion. The champion in question was the great Garry Kasparov, although he came out on top in the end by winning the 6-game competition 4-2.

29. The Gay Nineties and others : ERAS
When looking back at the 1890s, here in America we sometimes refer to the era as the Gay Nineties. The term is associated with a time of emerging wealth in the days before income taxes were permanently levied on citizens. Back in the British Isles, the same decade is known as the Naughty Nineties, days of society scandals and the outrageous antics of the likes of Oscar Wilde.

38. Hanna-Barbera output : CELS
In the world of animation a cel is a transparent sheet on which objects and characters are drawn. In the first half of the 20th century the sheet was actually made of celluloid, giving the “cel” its name.

44. “Vous êtes ___” : ICI
“Vous êtes ici” are important words to know when navigating your way around Paris. They mean, “You are here”, and you’ll often see them on maps in the street.

45. It’s never finished, only abandoned, per Paul Valéry : POEM
Paul Valéry was a French philosopher, noted for his essays and poems. He wrote a very large personal diary known as “Les Cahiers” (the notebooks), making entries every day of his adult life. That’s over 50 years of writing.

46. Southern California college : POMONA
Pomona College is a private school in Claremont, California in Los Angeles County. The name “Pomona” comes from the original location of the college in Pomona, California, where it opened for classes in a rental house in 1888. The following year it moved to the site of an unfinished hotel in Claremont, but retained the Pomona name.

51. Pipsqueak : RUNT
Pipsqueak is a term used for someone who is insignificant and contemptible. “Pipsqueak” is imitative of the sound made by somebody who is weak.

Back in 1500 a runt was an old or decayed tree stump, and by the early 1600s “runt” was being used to describe animals that were similarly old and decayed, and ultimately for the smallest and often sickest in a litter.

52. Pro ___ : TEM
Pro tempore can be abbreviated to “pro tem” or “p.t.” It is a Latin phrase which best translates as “for the time being”. It is used to describe a person who is acting for another, usually a superior.

56. Secretary of state between Marshall and Dulles : ACHESON
Dean Acheson was the Secretary of State in President Truman’s administration. Perhaps his most important contribution was convincing the president to get the US involved in the Korean War in 1950.

60. Bogey beater : PAR
The term “Bogey” originated at the Great Yarmouth Golf Club in England in 1890, and was used to indicate a total round that was one over par (and not one over par on a particular hole, as it is today). The name Bogey came from a music hall song of the time “Here Comes the Bogey Man”. In the following years it became popular for players trying to stay at par to be “playing against Colonel Bogey”. Then, during WWI, the marching tune “Colonel Bogey” was written and named after the golfing term. If you don’t recognize the name of the tune, it’s the one that’s whistled by the soldiers marching in the great movie “The Bridge on the River Kwai”.

62. It may be hard to change : BABY DIAPER
Here’s another word that I had to learn when I moved to America … “diaper”. What are called “diapers” over here we call “nappies” back in Ireland. The term “diaper” is actually the original term that was used in England for the garment, where “diaper” referred to the cloth that was used. The term diaper was brought to the New World where it stuck. Back in Britain, diaper was displaced by the word “nappy”, a diminutive of “napkin”.

68. Quaint sign word : OLDE
The word “olde” wasn’t actually used much earlier than the 1920s. “Olde” was introduced to give a quaint, antique feel to brand names, shop names etc.

70. Pacific capital : PAGO PAGO
Pago Pago is the capital of American Samoa in the South Pacific. The island was used by the US Navy during WWII and it managed to escape most of the conflict, with the only incident being the shelling of the city’s harbor by a Japanese submarine. A more devastating event was the tsunami that hit Pago Pago and surrounding areas in 2009, causing widespread damage and numerous deaths.

73. Pace in dressage : TROT
The equestrian sport of dressage involves demonstration of how well as horse responds to training. “Dressage” is a French word meaning “training”.

11. Standoffish : ALOOF
I suppose one might guess from the “feel” of the word “aloof” that is has nautical roots. Originally aloof meant “to windward” and was the opposite to “alee”. A helmsman might be instructed to stay aloof, to steer the boat into the weather to keep a distance from a lee-shore. It is from this sense of maintaining a distance that aloof came to mean “distant” in terms of personality. Interesting, huh …?

12. One who’s standoffish : SNOOT
“Snoot” is a variant of “snout” and is a word that originated in Scotland. The derivative “snooty”, an adjective to describe a “high-hat”, someone very haughty, started out as “snouty” back in the 1850s. The idea is that someone who is snooty, or snouty, tends to look down his or her nose at the rest of the world.

18. ___ Tour : PGA
The Professional Golfers’ Association was founded in 1916, and today has its headquarters (unsurprisingly) in Florida, where so many golfers live. Back in 1916, the association was based in New York City.

23. “Time’s fun when you’re having flies” speaker : KERMIT
Kermit has to be the most readily recognized puppet character created by the late great Jim Henson. Henson came up with Kermit way back in 1955 when he appeared on a puppet show called “Sam and Friends” that aired in Washington, D.C. Kermit is loved so much that he even has his own star on the Hollywood Walk of Fame.

25. Negotiations of 1977-79 : SALT II
There were two rounds of Strategic Arms Limitation Talks between the US and the Soviet Union, that resulted in the treaties SALT I (signed in 1972) and SALT II (signed in 1979).

33. Feinstein of the 34-Down : DIANNE
(34. See 33-Down : SENATE)
Dianne Feinstein is one of our US Senators here in California, and has been representing the state since 1992. Prior to heading to Washington, Feinstein was the Mayor of San Francisco for ten years, the first woman to hold that office.

36. Holders of reservations? : TEEPEES
A tepee (also written as tipi and teepee) is a cone-shaped tent traditionally made from animal hides, and used by the Great Plains Native Americans. A wigwam is a completely different structure, and is often a misnomer for a tepee. A wigwam is a domed structure built by Native Americans in the West and Southwest, intended to be more permanent. The wigwam can also be covered with hides, but more often was covered with grass, reeds, brush or cloth.

42. Like associates, on some e-mails : CCED
I wonder do the kids of today know that “cc” stands for carbon copy, and do they have any idea what a carbon copy was? Do you remember how messy the carbon paper was to handle?

47. TV star who once appeared in WrestleMania : MR T
Mr. T’s real name is Laurence Tureaud. He is famous for many things, including the wearing of excessive amounts of jewelry. He started this habit when he was working as a bouncer, wearing jewelry items that had been left behind by customers at a night club so that the items might be recognized and claimed. It was also as a bouncer that he adopted the name Mr. T. His catchphrase comes from the movie “Rocky III”. Before he goes up against Rocky Balboa, Mr. T says, “No, I don’t hate Balboa, but I pity the fool”. He parlayed the line into quite a bit of success. He had a reality TV show called “I Pity the Fool”, and produced a motivational video called “Be Somebody … or Be Somebody’s Fool!”.

49. Much Mongolian geography : STEPPES
A steppe is a grassland, devoid of trees apart from those growing near rivers and lakes. In this country we would likely call such a geographic feature a prairie.

50. Some ancient scrolls : PAPYRI
The papyrus plant was one commonly found in the Nile Delta of Europe. The pith of the plant was used to make a thick, paper-like material on which one could write. This writing material, which became known as papyrus, became a competitor for the most popular writing surface of the day known as parchment, which was made from animal skins.

55. Brief look inside? : MRI
A CT (or “CAT”) scan produces (via computer manipulation) a three dimensional image of the inside of an object, usually the human body. It does so by taking a series of two dimensional x-ray images while rotating the camera around the patient. The issue with CT Scans is that they use x-rays, and high doses of radiation can be harmful and that damage is cumulative over time. An MRI on the other hand (Magnetic Resonance Imaging) uses powerful magnetic fields to generate its images so there is no exposure to ionizing radiation (like X-rays). We used MRI equipment in our chemistry labs at school, way back in the days when the technology was still called Nuclear Magnetic Resonance Imaging (NMRI). Apparently the marketing folks didn’t like the term “nuclear” because of its association with atomic bombs, so it’s now just called MRI.

59. 10^-9: Prefix : NANO-
The prefix “nano-” was decided upon in 1947 at an international chemistry conference, and is used for “one thousand-millionth part”. The term comes from the Greek word “nanos” meaning “dwarf”.

65. Onetime name in late-night TV : PAAR
Jack Paar was most famous as the host of “The Tonight Show”, from 1957 to 1962. Paar got his start on television as a comic on “The Ed Sullivan Show”, and hosted a game show called “Up to Paar” that aired in 1952. When he died in 2004, “Time” magazine wrote that Paar was “the fellow who split talk show history into two eras: Before Paar and Below Paar”. Very complimentary …

66. Brand in the freezer : EGGO
Eggo is the brand name of a line of frozen waffles made by Kellogs. When they were introduced in the 1930s, the name “Eggo” was chosen to promote the “egginess” of the batter. “Eggo” replaced the original choice for a name, “Froffles”, created by melding “frozen” and “waffles”.