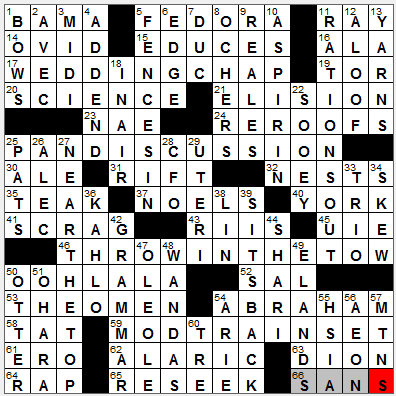 
Today’s Wiki-est, Amazonian Googlies
Across
1. Univ. with the cheer “Roll Tide!” : BAMA
The athletic teams of the University of Alabama are nicknamed the Crimson Tide, a reference to the team colors, crimson and white.

5. Indiana Jones accouterment : FEDORA
A fedora is a lovely hat, I think. It is made of felt, and is similar to a trilby but has a broader brim. “Fedora” was a play written for Sarah Bernhardt and first performed in 1889. Bernhardt had the title role of Princess Fedora, and on stage she wore a hat similar to a modern-day fedora. The play gave rise to the women’s fashion accessory, the fedora hat, commonly worn by women into the beginning of the twentieth century. Men then started wearing fedoras, but only when women gave up the fashion …

14. “Ars Amatoria” poet : OVID
The Roman poet Publius Ovidius Naso is today known simply as Ovid. He is usually listed alongside the two other great Roman poets, Horace and Virgil.

20. “___ is nothing but perception”: Plato : SCIENCE
Plato was a Greek philosopher and mathematician. He was a student of the equally famous and respected Socrates, and Plato in turn was the teacher and mentor of the celebrated Aristotle.

23. “Captain! The engines canna take ___ more!” (line from Scotty on “Star Trek”) : NAE
In the “Star Trek” series on television and in the movies, the colorful character of “Scotty” was played by the Canadian actor James Doohan. Doohan joined the Royal Canadian Artillery at the start of WWII, and participated in the D-Day Invasion of Normandy. After surviving the landing, that same day Doohan was shot by one of his own men in a tragic mishap. Doohan was hit six times, with a bullet to his chest stopped by a silver cigarette case he was carrying. One of Doohan’s fingers was shot off in the incident, an injury that he successfully concealed during his acting career.

35. Water-resistant wood : TEAK
Teak is a hardwood tree in the mint family, commonly found in monsoon forests of Asia.

37. Seasonal songs … or a hint to 17-, 25-, 46- and 59-Across : NOELS
“Noël” is the French word for the Christmas season, ultimately coming from the Latin word for “birth”, “natalis”. Noel has come to be used as an alternative name from a Christmas carol.

40. City at the confluence of the Ouse and Foss : YORK
York is the biggest city on the River Ouse in Yorkshire. The name “Ouse” comes from the Celtic word “usa” meaning water.

43. Muckraker Jacob : RIIS
Jacob Riis is famous for his photographs and newspaper articles that highlighted the plight of the impoverished in New York City. He wrote “How the Other Half Lives”, originally an extensive article that appeared in “Scribner’s Magazine” at Christmas 1889. The article had such an impact that Riis was commissioned to expand it into a book, published the following year.

52. “My gal” of song : SAL
“My Gal Sal” is a song written by composer Paul Dresser. “My Gal Sal” is also the name of the movie recounting Dresser’s life made in 1942. It stars Victor Mature as Dresser, and Rita Hayworth as Sally “Sal” Elliott.

54. Biblical name meaning “father of many” : ABRAHAM
Abraham is a prominent figure in the Jewish, Christian and Muslim religions. He was descended from Noah, and was the “father” of many tribes including the Israelites and Ishmaelites. In the Christian tradition then, Jesus was a descendant of Abraham through the Israelite tribe, and in the Muslim tradition, Muhammad was also a descendant, through the Ishmaelite tribe.

59. Stylish Lionel? : MOD(EL) TRAIN SET
Lionel is the name most associated with toy trains in the US. The first trains rolled off the production line in 1901 and they are still produced today, although the original Lionel Corporation is long gone. In 1995, the brand was bought by an investment company that included train enthusiast Neil Young, the singer, and operated as Lionel, LLC. Neil Young’s financial involvement ended in after a 2008 reorganization of the company following a Chapter 11 bankruptcy filing, but the company is still producing and selling.

61. Leandro’s love, in a Handel cantata : ERO
The Greek myth of Hero and Leander gave rise to a couple of operas (by Giovanni Bottesini and Arrigo Boito) and a more famous cantata from George Frideric Handel, all called “Ero e Leandro”.

62. Visigoth king who sacked Rome : ALARIC
Alaric I was a Germanic leader, King of the Visigoths from 395-410 AD. Early in his life, Alaric served as a mercenary in the service of the Roman Empire, but such a career didn’t settle well with him. When he became King of the Visigoths, Alaric mounted a campaign to seek new kingdoms and was successful in invading Greece and Italy. His eventual sacking of Rome marked the end of the great Roman Empire.

63. “Runaround Sue” singer, 1961 : DION
The singer and songwriter Dion DiMucci went by the stage name of just “Dion”. His most successful year was 1961 when recorded his big hits “Runaround Sue” and “The Wanderer”.

Down
2. French word whose opposite is 66-Across : AVEC
“Avec” is the French for “with”.

3. Certain skirt : MIDI
The midi skirt extends to the middle of the calf, and was very fashionable in the seventies.

4. Number next to a + : ADDEND
“Addend” is short of addendum, and is the name given to any set of numbers that is to be added.

8. Autumn colors : OCHERS
Ochre is often spelled “ocher” in the US (it’s ochre where I come from). Ocher is a light, yellowy brown color, although variations of the pigment are possible, such as red ocher and purple ocher.

9. Old Spanish silver coins : REALES
The real was the main coin used in Spain from the mid-14th through the mid-19th centuries. “Real” means “royal” in Spanish, and the plural of “real” is “reales”.

10. Trademark forfeited by Bayer under the Treaty of Versailles : ASPIRIN
Aspirin was a brand name for the drug acetylsalicylic acid. Aspirin was introduced by the German drug company Bayer AG in the late 1800s. As part of the war reparations paid by Germany after WWI, Bayer AG lost the use of the trademark Aspirin (and they also lost use of the trademark Heroin!) and it became a generic term.

18. Where Francis Scott Key saw bombs bursting : IN AIR
“The Star Spangled Banner” was written by Francis Scott Key. The lyrics were originally a poem by Key, inspired by his witnessing of the bombarding by the British of the American forces at Fort McHenry during the Battle of Baltimore in September 1814. The words were then set to the tune of a popular British drinking song written by John Stafford Smith called “The Anacreontic Song”, with Anacreontic Society being a men’s club in London.

26. Actor Guinness : ALEC
Sir Alec Guinness played many great roles over a long and distinguished career, but nowadays is best remembered for playing the original Obi-Wan Kenobi in “Star Wars”.

36. Mexican artist Frida : KAHLO
Frida Kahlo was a Mexican painter, famous for her self-portraits. She was married to the equally famous artist Diego Rivera. Kahlo was portrayed by the actress Salma Hayek in a film about her colorful life called “Frida” released in 2002.

38. Architect Maya : LIN
Maya Lin is a Chinese American born in Athens Ohio, and is an artist and architect. Her most famous work is the moving Vietnam Veterans Memorial in Washington, D.C. Lin was only 21-years-old when she won a public design competition in 1981 to create the memorial. Although her design is very fitting, sadly Lin was not a popular choice for the work given her Asian heritage. As she said herself, she probably would not have been picked had the competition been judged with the knowledge of who was behind each submission.

44. Emmy-winning Lewis : SHARI
Shari Lewis was the original puppeteer behind the PBS children’s show “Lamb Chop”. After she died in 1998, Lewis’s daughter Mallory took over her role.

48. Stand-up comic Sykes and others : WANDAS
Wanda Sykes now has her own talk show (The Wanda Sykes Show) that airs on Fox. Wanda Sykes is a very successful American, comedienne and comic actress, although interestingly, she spent her first five years out of school working for the NSA.

49. Safari antelopes : ELANDS
A eland is a large African antelope, in fact the largest on the continent.

51. Maureen of “Miracle on 34th Street” : O’HARA
The beautiful and talented Maureen O’Hara is an Irish actress, famous for her films made with fellow actor John Wayne and the director John Ford. O’Hara was born in a suburb of Dublin called Ranelagh (where many of my own ancestors were born).

57. The Dolomites, e.g.: Abbr. : MTNS
The Dolomites are a range of mountains in northeast Italy. Previously called the Pale Mountains, the name was changed to the Dolomites after the rock type known as “dolomite” that is found in plenty in the area.